Article
What is inequality?


Inequality is typically viewed as different people or households having different degrees of living standards. Thus, inequality is concerned with the relative position of different individuals (or households) within a distribution.

Why does it matter?

In addition to the average living standards within a country, its distribution affects the wellbeing of its citizens. With lower inequality, those at the bottom of the distribution are relatively better off, for each level of mean income in a country. Many think that a reasonably egalitarian distribution of income is a very worthwhile societal goal, while others point out that achieving an equal distribution can undermine incentives for acquiring higher living standards on average. Debate on the impacts of inequality and redistribution on economic performance is still ongoing.

How is it measured?

Most often, inequality is measured based on household income or consumption. The data to measure these types of variables is typically available from household surveys, now available for many countries.

Inequality in such variables is generally summarized by an inequality index. A wide range of inequality indices of inequality have been developed. One straightforward but informative way of considering inequality is to consider the shares of overall income going to those at different parts of the distribution. For instance, households can be ordered from the poorest to the wealthiest and divided into ten parts (deciles). Income shares going to a particular decile can then examined and compared with between countries. Similarly, households can be divided into five groups (quintiles). Often, it is of interest to look at the income shares of the bottom and top five per cent (called percentiles 5 and 95, or P5 and P95).

The figure below depicts the population ranked from the poorest to the wealthiest at the horizontal axis and the share of overall income at the given income level (the vertical axis). The combination of the income shares is called the Lorenz curve. The 45 degree line shows the distribution of income in the case income were perfectly equally distributed.

What is the WIID?

The UNU-WIDER World Income Inequality Database (WIID) collects and stores information on income inequality for developed, developing, and transition countries. In addition to merely reporting inequality indices for all countries, care has been taken to specify the conceptual base for each observation and to otherwise document the data well.

Observations may refer to different concepts of inequality (for example, whether the Gini is for gross income, disposable income or consumption inequality). WIID values may have been calculated on the basis of the full population or using a subset (rural  vs urban) only, or they may rely on different equivalence scales. This means that there is no single ‘correct’ WIID value for a country in a particular year. This implies that when cross country comparisons of income inequality are made by analysts, the series relied on must be  carefully selected so they are comparable.

Importantly, the WIID also contains a quality classification of observations. The highest quality observations are not always available for all countries and years, especially for developing countries.

Cross-country comparisons of inequality are very useful but not necessarily always easy. The idea behind the WIID is to enable researchers and policymakers alike to carry out these comparisons as reliably as possible. 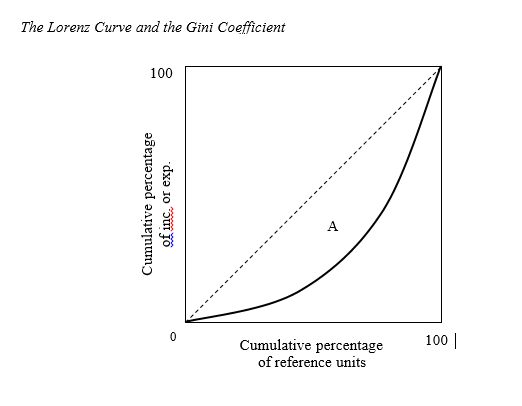 A straightforward graphical interpretation of the Gini coefficient is in terms of the Lorenz curve, which is the thick curve in the figure above. The horizontal axis measures the cumulative percentage of the population, whose inequality is under consideration, starting from the poorest and ending with the richest. The vertical axis measures the cumulative percentage of income (or expenditure) associated with the units on the horizontal axis.

In case of a completely egalitarian income distribution in which the whole population has the same income, the Lorenz curve would be the dashed 45-degree line. When incomes vary within the population, the poor population has a proportionately lower share of income compared with the rich population, and the Lorenz curve may look like the above thick curve below the 45-degree line. As inequality rises, the thick curve moves towards the bottom right-hand corner.