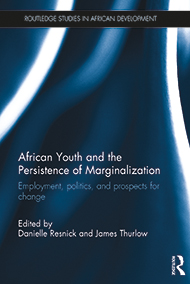 Creating enough jobs for young people is a priority for many governments, particularly in Africa, where population growth is fastest.

The region is experiencing rapid urbanization, but without the industrialization or decline in rural populations that characterized East Asian development. Consequently, there is tremendous pressure on agriculture and the informal economy to create jobs that meet the aspirations of young Africans.

Drawing on their range of expertise and policy experience, panelists will reflect of the state of knowledge about Africa's youth challenge, and the possible roles of governments and their development partners in addressing it. The session will also draw on the lessons of the 'Prospects for Africa's youth' project.

James Thurlow is a Senior Research Fellow at IFPRI. His research focuses on the interactions between policies, economic growth and poverty, primarily using computable general equilibrium and micro-simulation modelling. Past research has focused on evaluating public investments and policies; rural, regional and urban development; and climate change and other external risks. Dr Thurlow has worked with governments and researchers throughout Sub-Saharan Africa, and in Bangladesh, Peru, Tunisia and Vietnam.

Luc Christiaensen is lead agricultural economist in the World Bank’s Jobs Group and a senior and honorary research fellow at the Catholic University of Leuven and the Maastricht School of Management respectively.  Dr Christiaensen has written extensively on poverty, food security and urbanization in Africa and East Asia. He was co-task manager of the 2016 World Bank Africa Region flagship report: Poverty in a Rising Africa and core member of the team that produced the World Development Report 2008: Agriculture for Development.

James Sumberg is a Research Fellow at the Knowledge, Technology and Society Team, Institute of Development Studies (IDS) at University of Sussex. An agriculturalist by training, Dr Sumberg has over 25 years of research experience on small-scale agriculture, natural resource management, agricultural research policy, and food and rural development in tropical regions, with a particular emphasis on sub-Saharan Africa. A key research interest has been the dynamics of change within agricultural systems.

Danielle Resnick is a Senior Research Fellow at IFPRI. As a political scientist her research focuses on the political economy of development. Key research areas include the impacts of public sector reforms on accountability and efficiency, drivers of agricultural policy volatility and reform, urban governance structures and their influence on service delivery, democratization and political participation, and foreign aid effectiveness. She currently co-leads IFPRI’s strategic research on Strengthening Institutions and Governance.

Louise Fox is USAID’s Chief Economist. Before joining USAID she served as a Visiting Professor of Development Economic Policy at the University of California, Berkeley, and as a consultant in development economics, specializing in employment, labour markets, gender, social service delivery and poverty reduction. Dr Fox has also had a distinguished career at the World Bank where she advised governments in Africa, Latin America, Asia and Eastern Europe.