Ever since the British Industrial Revolution, energy has been a key factor of production. Recent history has proved no exception. The pattern of primary commercial energy consumption since 1965 is presented in Figure 1. 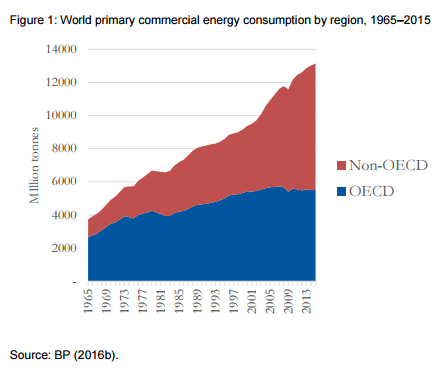 The effects of the oil price shocks of the 1970s were to push oil out of the static sector (power generation), where it was replaced initially by coal and gas. However, until recently, oil retained its favoured position in the transport sector, while gas remained a constrained fuel, limited by its high transportation costs.

Moreover, the use of gas in the power sector was proscribed by regulation in the US and the EU between 1975 and 1990. In emerging market economies, its domestic development by the (foreign) companies that had discovered the gas was also constrained in the face of non-convertible currencies. Thus, gas earned only revenue that the foreign company could not remit back to its shareholders 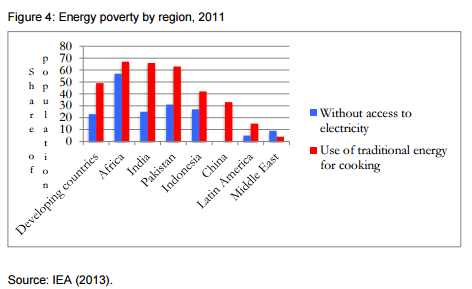 Despite the growing use of commercial energy, the world faced considerable fuel poverty. Figure 4 illustrates the size of populations without access to electricity and those without access to modern cooking fuels. It is interesting to observe that the Millennium Development Goals did not relate at all to energy. However, the Sustainable Development Goals explicitly refer to energy. This has important implications for the future of oil and gas in the development process, not least because the price of solar electricity is falling more rapidly than expected.

Oil and gas in global trade

Oil and gas are major internationally traded commodities. Figure 5 shows the proportion of traded oil consumed and the way that this trade has been increasing this century. Because of economies of scale, transporting oil and oil products is extremely easy and extremely cheap. This goes a long way to explaining why oil is an internationally traded commodity with a unified market, while gas remains traded in regional markets. 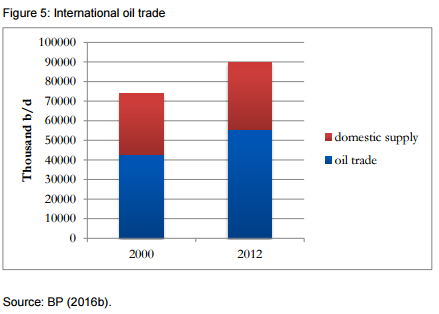 By contrast, gas suffers from what has become known as ‘the tyranny of distance’. As can be seen from Figure 6, a much smaller proportion of consumption is traded internationally, although this has been growing since 2000. 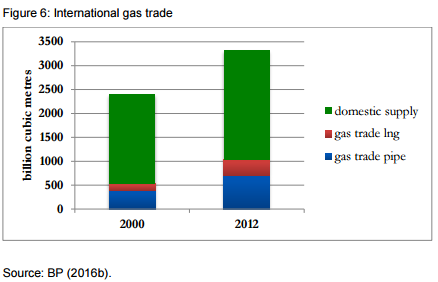 For many countries, the oil and gas trade makes a significant contribution to the current account in the balance of payments. In particular, a number of oil exporters are dependent upon oil exports for their foreign exchange.

Prices and the macro economy 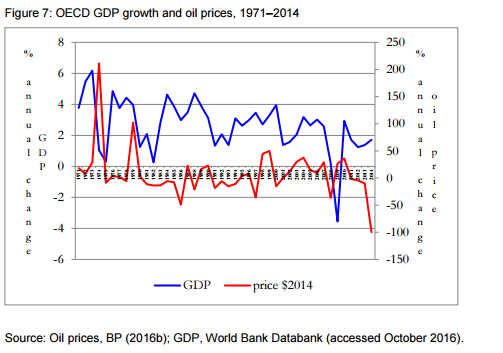 Ever since the oil price shocks of the 1970s, attention has been paid to the relationship between oil prices and global GDP growth. Casual observation of Figure 7 suggests that the changes in oil prices in the 1970s and 1980s did affect economic growth in OECD countries. There are good economic grounds to expect this negative relationship. Higher oil prices shifted income from the OECD to the OPEC countries. The OECD countries had a much higher propensity to consume than the OPEC countries, which in this period lacked the institutional capacity to spend the whole of their windfall revenues, a large proportion of which were simply left in Western banks. Thus, global aggregate demand fell, leading to an economic recession. 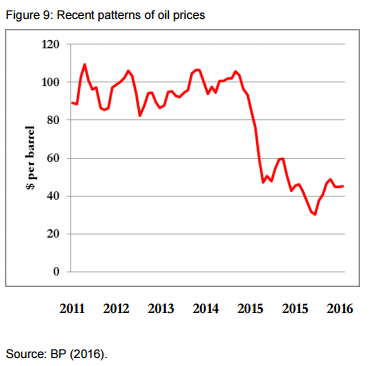 Figure 9 shows the ‘collapse’ in oil prices after June 2014. It is important to put this into its historical context. As can be seen, complaints heard over the last couple of years about ‘low’ oil prices (i.e. below US$40 per barrel) are clearly misplaced given that the average price of Brent in real terms between 1986 and 2004 was only US$33 per barrel. Post 2004, oil prices experienced an apparently inexorable rise. As will be developed below, this had important implications for oil-exporting countries.

The higher prices seen in all natural resources from 2004 to 2014 have brought the issue of the ‘resource curse’ back into the policy debate. Linked to the debate on the resource curse has also been a revived interest in economic diversification in countries dependent upon oil and gas revenues. The key point here is that oil revenue is not income. Rather, it simply represents the re-shuffling of the nation’s portfolio of assets.

In the initial stage of oil production, it provides financial resources, which should be used to promote economic development. Production then reaches a plateau. In this transition phase, it is crucial that the financial resources released by producing the oil are used to create an alternative income producing asset. Eventually, production will decline as a result of natural depletion. For export earnings, this process is accelerated as domestic consumption rises. In this stage it is no longer feasible to rely on oil revenues to support the rest of the economy. Therefore, oil-dominated economies should aim from the very early stage of production to diversify away from dependence on oil revenues.

Geopolitics and their economic impact

There are two problems here that aggravate oil price volatility. First, many of those playing in the paper markets do not really understand the oil industry and frequently misread the state of the wet barrel market, often assuming shortages when there are none. The second source of price volatility is that perceptions can change in the blink of an eye—and, with them, prices. 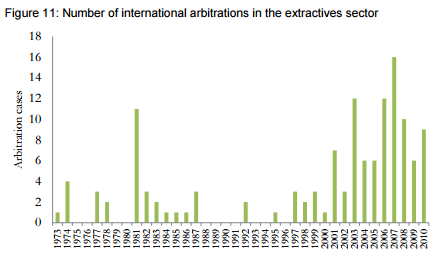 In this context it is easy to see the relevance of geopolitics in terms of recent price history. Any loss of oil supplies as a result of geopolitical events such as a war has affected physical supply in the wet barrel market. Wars and rumours of war have also affected expectations in the paper barrel market. Politics have clearly affected government policy. Security of supply concerns drive the energy policies of energy-importing nations, which in turn affect energy consumption levels and the energy mix. Equally, security of demand concerns drive the depletion policies of producer governments and the rise (or fall) of resource nationalism. Figure 11, using the number of arbitration cases as a proxy, measures the extent of resource nationalism. As can be seen, this century there has been a significant rise in resource nationalism, which has coincided with the upturn of the commodity super-cycle.

In my recent WIDER Working Paper ‘The role of oil and gas in the development of the global economy’ I build on the history presented above to consider various conventional views of the future of oil and gas in the primary energy mix, trying to explain why there is a tendency towards consensus in the different forecasts. I then seek to challenge these conventional views by examining the relative importance of the various drivers of the future—economic and technological and geopolitical and to show why the future may prove to be very different from what is expected and how this may change the context in which producers must frame their policy responses. Read the full paper here and keep an eye on UNU-WIDER’s Extractives for Development project.

The inequality-resource curse of conflict

Working Paper | The role of oil and gas in the development of the global economy
Blog | Like it or not, poor countries are increasingly dependent on mining and oil & gas
Blog | Extractive industries and development - What’s in the UNU-WIDER research pipeline?
Working Paper | The inequality-resource curse of conflict

Made in Africa – the future of production on the continent

Made in Africa – the future of production on the continent
Next

The COVID-19 pandemic has shown that African tax and social-benefit systems are currently ill-equipped to protect households from sudden income losses...
The Pandemic and Africa's Social Safety Net