In the recent uprisings in the Middle East and North Africa, women were at the forefront of the protests. However, once the struggle was over, women were generally expected to return to their normal roles. Very few were present at the negotiations about new political orders, and it now seems likely that women will make few gains under the new regimes. Due to the persistent structural injustice and violence women experience, both during conflict, and in the period of reconciliation, gender issues need to be given special emphasis during the transitional process.

Transitional justice (TJ) often fails to adequately deal with the multi-dimensional issue of gender justice. This is partly to do with the way women are treated during conflict situations, but also women’s roles in societies in general. Even in countries at peace, and where women's rights are largely respected, gender inequality remains prevalent; women are underrepresented in both politics and business, and are regularly paid less than men in the same positions. As countries slide deeper into conflict, this imbalance becomes even worse. Often any previous political gains made by women are also lost as society is re-patriarchalized through violence.

This problem is particularly prevalent in the all too common nationalistic and ethnic conflicts, which are often based on supposed ’natural’ hierarchies of human nature. Such ideologies tend to view women not only as 'the weaker sex', but also the biological producers of ethnic and national heritage. Consequently women often face the threat of gender-based violence, not only because they are women, but because they are members of a particular ethnic group. In such a context gender-based violence can come to be seen as an effective weapon, sexually assaulting the women of an ethnic group both humiliates opponents, and threatens their ethnic and racial purity.

Given the level of violence women face in conflict situations a successful TJ process needs to pay special attention to the gender dimensions of the conflict. However there are a number of reasons why such attention is often not given, and why problems based on gender are often marginalized during the TJ process.

Transitional justice is both backward and forward looking in nature. Key TJ mechanisms such as truth commissions, tribunals, reparations, apologies, and amnesties seek not only to address the wrongs of the past, but to lay the groundwork for a more just and peaceful future. One of the key issues facing women seeking justice during a transitional period stems from this distinction. Attempts to bring about backward looking justice by bringing those responsible for gender-based violence to account are often seen as destabilizing and threat to future stability. Women therefore come to be seen as enemies of peace and reconciliation. 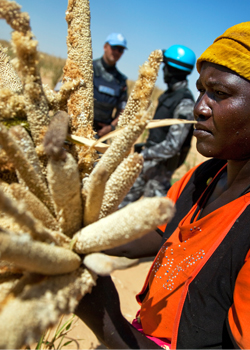 In an effort to improve the way TJ handles gender issues new methods to deal with sexual and gender-based violence have been tried. However while the explicit focus on ’women's issues’, and the establishment of special courts to deal with sexual violence may lead to more convictions, it also tends to separate gender injustices from wider human rights issues. This may mean that women's issues will not be taken seriously by mainstream courts once transitional justice finishes, and interim external interference is withdrawn.

A related issue is that many international initiatives which aim to reduce violence against women are pursued in parallel to other reforms. Mechanisms such as the UN Security Council Resolution 1325 - 'Women Peace and Security' - give countries an ideal to work towards, but this ideal is often ignored while the country deals with what are seen as more pertinent issues of its own constitution and other reforms. This problem is compounded to some extent by the fact that increasingly those designing TJ processes try to be more culturally sensitive and not to be seen directly promoting western individualism and universalism. A focus on culturally sensitive approaches to justice makes it easy to allow gender injustice and the suppression of women's rights to continue.

The general problem women face during periods of transitional justice is that women's rights continue to be 'yielding rights'. That is they are seen as those rights that have to give way to the goals of peace and justice even when radical political changes take place. Women's rights are sacrificed in order to not offend those cultural and religious views which maintain the suppression of women. Gender issues are often put aside, and their advocates are told they must wait until peace is secured before pushing for change.

In order for transitional justice to achieve its supposed goal of social justice then the idea that women's right should always yield to other values needs to be abandoned. Instead TJ mechanisms should acknowledge the fact that women are often disproportionately affected by conflict, and put women's rights at the forefront of efforts to build a more peaceful future.

However gender equality cannot be achieved by TJ mechanisms alone as they are temporary and in place only during the period of transition. Instead the role of TJ has to be leading the way in integrating gender justice into the processes of all reforms in such a way that it will retain a central role in the new stable political order once the transitional period is over.