The design and implementation of industrial policy should be closely linked to spatial considerations. Firm output and productivity are often location-specific, with factors such as the availability of physical infrastructure, proximity to sources for raw materials, and the potential for adopting research-based technology from similar firms playing an important role.​

From a spatial perspective, clustering with other firms, increasing market power, and staying in a particular region for longer periods has a greater impact on a firm-level productivity than spillovers from market conditions and firm-specific links to ventures located in neighboring regions or municipalities

In South Africa, the biggest firm-level driver of increased firm-level productivity is an increase in intermediate inputs

Agglomeration economies —where benefits arise from a spatial concentration of economic activity— are a key determinant of regional productivity. The urbanization trend in South Africa and efforts to achieve increased agglomeration raise an important policy consideration on the extent to which geographical dynamics affect firm productivity.

Since the late 1990s, the key initiatives of South Africa’s industrial policy have focused on addressing the legacy of apartheid’s spatial economic structures through state interventions, mainly in urban areas. The spatial orientation of industrial policy in South Africa aims to improve the conditions of production in previously marginalized communities by promoting investments in infrastructure and public goods. Such improvements are intended to facilitate a longer term spatial recomposition of South Africa’s economy thereby reducing the burdens of poverty, inequality, and unemployment.

Firm-level productivity and the effect of agglomeration

Firms that exhibit high or growing productivity may do so because of additional benefits that mainly accrue from location in a specific municipality (or geographical region) instead of the spillover effects from market conditions or a specific enterprise’s links to other firms in neighbouring municipalities. Increases in firm clustering, the degree of a firm’s market concentration or market share, and the duration of firm operation, all have positive effects on firm-level productivity. 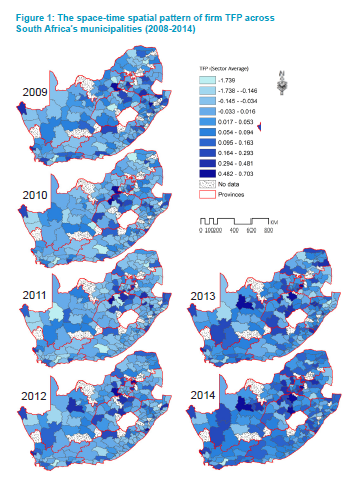 Three provinces —Gauteng, Free State, and Kwazulu-Natal— include municipalities that have had productivity hotspots, understood to be the regions that registered significant clustering of relatively higher productivity firms in one or more years over the period. We also observe that some municipalities, especially those in the Northern Cape experience positive returns to agglomeration even when they did not contain TFP hotspots. 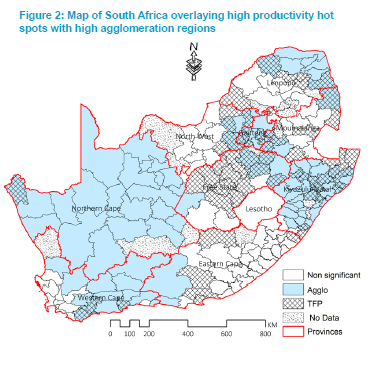 Likewise, the opposite has been true in the Free State, where TFP is high but the agglomeration measure is not. This could be due to sector or industry-level effects which have not been accounted for.

At a local scale, firms can benefit from their interactions with other firms, cluster, increase their market share, and exploit their business experience in order to raise productivity levels. To increase the benefits of agglomeration and expand its geographical reach, a supportive and complementary policy environment is recommended.

For more experienced firms, programmes that reduce the costs of key intermediate inputs, such as energy, can assist in expanding the scale of operations while raising productivity. Our evidence on firm duration of existence suggests that incorporating firm age-based targeting into the matrix of policy experimentation could yield increased returns to the efficiency of industrial policies.Such an environment could include policy tools to promote intra-firm spillovers such as fiscal incentives that lower a firm’s research and development costs or non-fiscal incentives that reduce the regulatory costs of innovating or adopting new technologies.

Improved targeting of certain industrial policies, based on firm age or duration of existence, could be an important arena for policy innovation

The duration of existence, or firm age, matters for productivity. Policy interventions must therefore consider the lifecycle of firms within specific industries and the country’s overall balance of activities in terms of firm duration of operation. For example, policies that ease start-up and market entry for young firms, especially small and medium-sized ones, such as enhancing access to credit, are essential. This brief is based on WIDER Working Paper 2019/93 ‘Agglomeration and productivity in South Africa Evidence from firm-level data’, by Hammed Amusa, Njeri Wabiri and David Fadiran.