THIS ARTICLE IS ON EARLY VIEW. This study provides new evidence on the effect of shortening the duration of pre‐university education on long‐term labour market outcomes in Ghana, exploiting the education reform of 1987 as a natural experiment. Our results indicate that the drastic cut in...

THIS ARTICLE IS ON EARLY VIEW. The COVID-19 pandemic has led to a spate of studies showing a close connection between inequitable access to health care, welfare services and adverse outcomes from the pandemic. Others have argued that democratic governments have generally failed relative to more...

THIS ARTICLE IS ON EARLY VIEW. Corruption is widely believed to have an adverse effect on the economic performance of a country. However, many East and Southeast Asian countries either achieved or currently are achieving impressively rapid economic growth despite widespread corruption...

We evaluate a major personal income tax reform in Uganda that came into effect in 2012–13. The reform increased the tax-free lower threshold, increased tax rates for higher incomes, and introduced an additional highest tax band. Using the universe of pay-as-you-earn administrative data...

What drives livelihood diversification among predominantly rural households in developing countries and how can welfare-enhancing patterns be established and sustained in the long run? A large literature has focused on whether income diversification is a means of survival or a means of...

With structural changes in production coupled with technological progress, there have been shifts in modes of production and patterns of employment, with important consequences on task composition of occupations. This paper has utilized different rounds of Labour Force Survey data of...

This second paper on hydrocarbon gas flaring and venting builds on our first, which evaluated the economic and social cost (SCAR) of wasted natural gas. These emissions must be reduced urgently for natural gas to meet its potential as an energy-transition fuel under the Paris Agreement on Climate...

Atmospheric emissions urgently need to reduce for natural gas to fulfill its potential role in the energy transition to achieve the Paris Agreement on climate change. This paper establishes the magnitude and trends of flaring and venting in oil and gas operations, as well as their emissions...

This paper makes use of tax–benefit microsimulation techniques to quantify the distributional effects of COVID-19 in Ecuador and the role of tax–benefit policies in mitigating the immediate impact of the economic shocks. Our results show a dramatic increase in income poverty and...

Gender gaps in labour force participation in developing countries persist despite income growth or structural change. We assess this persistence across economic geographies within countries, focusing on youth employment in off-farm wage jobs. We combine household survey data from 12 low- and...

Does secessionism lead to social polarization? Despite much research on independence movements, their relationship to polarization, a key mechanism theorized as increasing the chances of violent conflict, remains less understood. We argue that secessionist conflicts can polarize along both...

The identification of foreign firms and South African multinational enterprises (MNEs) in the CIT-IRP5 panel has proved to be a challenge for many researchers. The CIT-IRP5 panel contains variables indicating different thresholds that determine foreign ownership. The dataset also has variables... 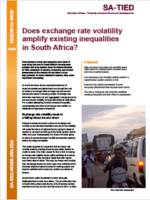 Even though poverty and inequality have been of overriding concern in South Africa’s development policies and programmes since its democratization in 1994, measures of poverty, inequality, and related phenomena in the country do not show a clear improvement. In some important respects, they...