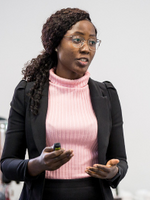 In developing countries in general, and Cameroon in particular, young people struggle to get the quality of education needed for upward social mobility. I started studying intergenerational mobility in the labour market in Cameroon during my Masters studies, and moved my focus area to Sierra...

From the book: Growth and Poverty in Sub-Saharan Africa

In this study, we assess the inclusiveness of growth by tracking the yearly percentage change in the household consumption of individuals over different growth spells in Cameroon, Senegal, and Tanzania. With cross-sectional data, we track the consumption of groups of individuals that share similar...

The present study aims to explore economic and socio-demographic factors that influence the household’s probability to switch from firewood to clean fuels in northern Cameroon. The paper employs an ordered probit model to construct cooking patterns and fuel choices. Three main cooking sources...

The purpose of this paper is to capture the impact of foreign capital inflows (which include foreign aid and foreign direct investment) on economic growth in Cameroon. Using the autoregressive distributive lag approach to cointegration and time-series data for the period 1980–2008, the...

Download PDF Copy Citation
Book Chapter
Is it Possible to Reform a Customs Administration?
– The Role of the Customs Elite on the Reform Process in Cameroon
Thomas Cantens - , 2012

From the book: The Role of Elites in Economic Development

Copy Citation
Working Paper pdf
Is it Possible to Reform a Customs Administration?
– The Role of the Customs Elite on the Reform Process in Cameroon
Thomas Cantens - UNU-WIDER, 2010 - Helsinki, Finland

An ethnographic approach is applied to Cameroon customs in order to explore the role and the capacity of the bureaucratic elites to reform their institution. Fighting against corruption has led to the extraction and circulation of legal ‘collective money’ that fuels internal funds. This...

This paper addresses the economic impact of forest management on gender and food security of rural poor in Africa. The analyses reveal that deforestation places major demands on women and children’s time, limiting their opportunities to obtain an education or undertake income-generating...

This paper illustrates how, in relation to globalization, formal and informal land institutions are prone to generate conflict over land rights and examines the implications of such conflicts on security levels of access to primary assets for the poor in two villages in Cameroon – Vekovi and...

In the beginning of the 1980s, Cameroon witnessed a sustained rate of growth, associated essentially with the boom in the oil sector. Increased budgetary and extra-budgetary resources generated by this sector helped to raise the investment rate in the economy, and to maintain a reasonable level of...