This paper studies the legacies of wartime institutions, measured as rebelocracy, on the ability of households to cope with negative income shocks. Rebelocracy is the social order established by non-state armed actors in the communities they control. By providing public goods and a predictable...

This paper investigates the impact of inequality on individual civic engagement at the community level, whether this impact persists over time, and what mechanisms may shape the relationship between inequality and civic engagement. The results show that inequality in Colombia is associated...

The aim of this paper is to quantify the financial cost that informal workers would incur in the event of entering formality, accounting for potential earnings gains upon entry. To do so, we use representative microdata from Ecuador and Colombia, together with detailed tax–benefit models,... 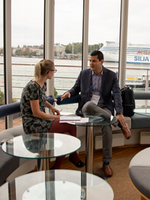 Four years ago, in 2014, Juan Villa spent three months at UNU-WIDER in our PhD Fellowship Programme. I spoke to him on a sunny September afternoon while he was back in Helsinki for the Think development - Think WIDER conference about his journey since his studies, and about what’s next.... Between 2000 and 2013, Colombia experienced rapid economic growth. The country suffered a slowdown at the beginning of the period and during the international crisis of 2008, but during both slowdowns, the growth rate never turned negative. Most labour market indicators improved and followed the...

The effects of social transfers on growth are still unclear. The limitations of aggregated data at sub-national levels have confined the analysis to the use of simulation models and household surveys. As an alternative, this paper contributes to the empirical literature by assessing the effects of...

The city of Medellín, Colombia was a cauldron of violence with 185 homicides per 100,000 people in 2002. By 2006, this rate had declined to 32.5. Such successful transformation was termed the ‘Medellín miracle’ and credited to policies of the city’s mayor, Sergio Fajardo. Fajardo...

This paper evaluates transformative policy innovations with respect to security and taxation in the three main Colombian cities: Bogotá, Medellín, and Cali. In the first two, such policies were associated with huge success. Elsewhere we (Gutiérrez et al. 2009) have tagged these transformation...

This paper uses two unique panel data sets to study the causal effect that armed conflict has over entrepreneurial activity in Colombia. Using a fixed effect estimation methodology at the plant level and controlling for the possible endogeneity of armed conflict through the use of instrumental...

As elsewhere, the Colombian private sector has been accused of promoting or profiting from violence in the country. However, the private sector’s role in the armed conflict and the impact of conflict on entrepreneurial activity vary, as reflected by differences in political activism, in...