Objective: To determine whether periodic supportive supervision after a training course improved the quality of paediatric hospital care in Kyrgyzstan, where inappropriate care was common but in-hospital postnatal mortality was low. Methods: In a cluster, randomized, parallel-group trial, 10...

This paper aims to study the impact of migration on labour supply and time-use of women left behind in Kyrgyzstan. Using the household survey data for 2011, labour supply is measured by occupational choices and working hours. Apart from the labour supply data, this study uses detailed information...

From the book: Spatial Disparities in Human Development

This paper focuses on inequality in living standards across oblasts and regions within Kazakhstan, the Kyrgyz Republic, Tajikistan, Turkmenistan and Uzbekistan. Regional inequality is an important area of research and policy development. Inequality in income and consumption are logical outcomes in... 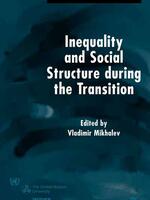 Social structures undergo transformation with the transition to a market economy. This collection examines the role of inequality in the formation of economic elites and middle classes, as well as in the rise of poverty in transitional societies. Based on comparative analysis of social...

From the book: Transition and Institutions

The transition from plan to market has fundamentally transformed the social structure in Central and Eastern Europe and the Former Soviet Union. The small Central Asian Republic of Kyrgyzstan exemplifies these changes.Using data from nationally representative living standards measurement surveys in...

Kyrgyzstan is one of the poorer countries undergoing transition from a centrally planned to a market economy. Unlike its neighbour Uzbekistan, Kyrgyzstan followed a rather radical reform strategy, introduced liberal macroeconomic reforms and large-scale privatization. Having laid major foundations...