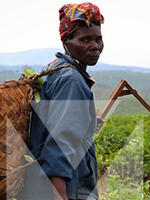 Like many developing countries, Mozambique is struggling with problems of poverty, inequality, low productivity, unemployment, and low institutional capacity. The COVID-19 pandemic is now adding to these challenges. Finding solutions hinges on examining, understanding, and building the evidence...

Plastics are ubiquitous across the region and play an important role in multiple industries. Most plastic products are based on a value chain that is grounded in petroleum refining, posing an environmental challenge. Plastic manufacturing in South Africa suffers from the high cost of polymers as...

Mozambique is among the most disaster-prone countries in the world. A bigger than usual, and mostly unexpected, flood occurred in the central-northern region of the country in the first few months of 2015, causing huge damage to infrastructures.  In this study, we use a nationally...

We analyse the multidimensional wellbeing of children aged 0–17 in Mozambique and find that 46.3% can be considered multidimensionally poor.  A substantial divide exists between urban and rural areas and between northern and southern provinces. We compare Mozambican children’s...

Mozambique is among the world’s least complex economies. By systematically accounting for both supply- and demand-side factors, we identify new products and sectors that can help to diversify and upgrade its economy. In a supply-side analysis, we use network methods from the literature...

How jobseekers set their earnings expectations is central to job search models. To study this process, we track the evolution of own-earnings forecasts over 18 months for a representative panel of university-leavers in Mozambique and estimate the impact of a wage information intervention. We sent...

In the light of Mozambique’s natural resources boom—especially its large-scale investments in mining, oil, and gas—this paper analyses the prospects for the extractive industries to contribute to economic transformation from an institutional perspective. To this purpose, we...

As a sovereign country, Mozambique initially relied on international solidarity and managed its donor relations well. Donor dependency entailed some loss of agency for the government as it allowed donors to challenge its capacity but never its authority. However, in the last decade, donor...

The rule of law and judicial independence are a project yet to be achieved in Mozambique. The different attempts made so far to reform the legal system, mainly after the change in political and strategic direction brought about by the Constitution of 1990, were always short-sighted and...

Mozambique has achieved incipient but still fragile socio-economic development since 1975. The public financial management system has been reformed and improved, but its performance has weakened since 2013. Applying an institutional economics approach, we have identified the economic growth...

With the introduction of the economic reforms in the late 1980s, the opening up of the political arena and the end of the civil war in the early 1990s, the decentralization process began in Mozambique. Different research developed in recent years shows that, as is the case in other countries in...

From the early days of national independence in 1975, the central aim of the educational policy in Mozambique has been to ensure that all school-age children have access to school and can remain there until they have completed their basic education. In the pursuit of this aim, the extension of...

The financial inclusion effort achieved positive results, with the number of Mozambicans having access to banking services increasing considerably, particularly after 2011–12. However, the economic and social impact was limited, considering that farm productivity has remained low and...