In the name of progress: Will technology solve inequality?

The 2022 WIDER Annual Lecture by Daron Acemoğlu occurs on Friday 7 October 2022 at the Universidad de los Andes (UNIANDES) in Bogotá, Colombia. The livestreamed event is organized in collaboration with UNIANDES, and closes the three-day 2022 WIDER Development Conference Reducing inequality – the great challenge of our time.

This event is livestreamed. Register to attend the livestream here.

The WIDER Annual Lecture continues in its tradition of presenting groundbreaking research with renowned economist Daron Acemoğlu. Based on his newest book, In the Name of Progress: Our Thousand-Year Struggle over Technology and Prosperity (co-authored with Simon Johnson), this presentation will challenge the techno-optimism of our age, and of our academic profession, which maintains that technological advances will ultimately benefit society at large.

He explores how and why this idea has taken root in economics, and how it has influenced current policies and regulations. Using historical and contemporary examples, he explains that broadly-shared prosperity results from technological advances only when new technologies do not just automate work but also create new tasks for workers, and when institutions empower workers, so that productivity gains are shared between capital and labor. Using this framework, he provides a reinterpretation of the era of shared prosperity following World War II, why most growth episodes of the last thousand years have not brought anything like this type of shared prosperity, why this episode of shared prosperity came to an end, and what the path of digital technologies and artificial intelligence imply for our future.

Daron Acemoğlu addresses these questions in the 2022 WIDER Annual Lecture, drawing on his research on the topic of automation and its impact on workers. He is joined by Marcela Eslava, Professor of Economics at Universidad de Los Andes, in Bogotá, Colombia, as discussant.

Daron Acemoglu has received the inaugural T. W. Shultz Prize from the University of Chicago in 2004, and the inaugural Sherwin Rosen Award for outstanding contribution to labor economics in 2004, Distinguished Science Award from the Turkish Sciences Association in 2006, the John von Neumann Award, Rajk College, Budapest in 2007, the Carnegie Fellowship in 2017, the Jean-Jacques Laffont Prize in 2018, the Global Economy Prize in 2019, and the CME Mathematical and Statistical Research Institute prize in 2021.

He was awarded the John Bates Clark Medal in 2005, the Erwin Plein Nemmers Prize in 2012, and the 2016 BBVA Frontiers of Knowledge Award. 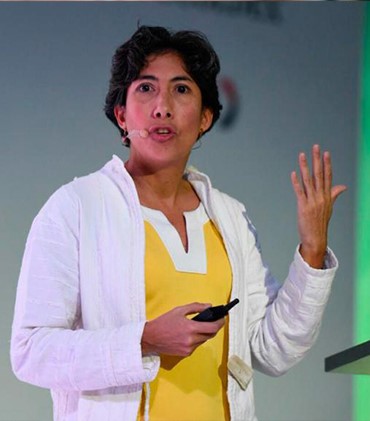 Marcela Eslava is Professor and Dean of Economics at Universidad de Los Andes, Bogotá; a Fellow of the Econometric Society; and Vice-President 2022-2023 (President 2024-2025) of The Latin American and the Caribbean Economic Association (LACEA). Professor Eslava holds a PhD in Economics from the University of Maryland at College Park. Her current research interests revolve around the lack of inclusive growth in Latin America, with a focus on firm dynamics and productivity, as well as informality. Professor Eslava’s research has been published in leading academic journals. She has been involved in multiple initiatives, research projects and missions led by multilateral organizations and the Colombian government, to contribute to the understanding of the origins of the deficit of inclusive growth in the region and to devise solutions to it.