In her new role, Patricia Justino will support UNU-WIDER Director Kunal Sen in providing leadership to the institute’s researchers and building stronger networks with donors and other stakeholders. 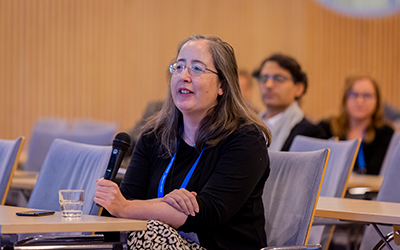 ‘During her time at UNU-WIDER, Patricia Justino has contributed to our mission in many ways, by providing leadership to our country programme in Mozambique, by initiating major research projects on institutional legacies of violent conflict, and on the role of trust in unstable democracies. She also had a leading role in putting together a high-profile WIDER Development Conference on conflict and peacebuilding earlier this year’, Kunal Sen highlights.

‘I'm pleased to welcome Professor Justino to her new leadership role at UNU-WIDER, the oldest institute in the United Nations University system that, over the decades, has grown into one of the UN’s foremost research teams. Patricia Justino’s expertise on conflict and governance in developing countries has already contributed greatly to UNU’s mission, and her passion for solving pressing global issues will continue to help UNU-WIDER promote sustainable and equitable development for all’, says United Nations University Rector David Malone.

Leading expert on linkages between political violence, trust, and development

Before this appointment, Patricia was a Senior Research Fellow at UNU-WIDER for three years (2019-2022). She is also a Professorial Fellow at the Institute of Development Studies (IDS) in UK. Her research has been published in leading international journals, and she has held several advisory positions in major international organizations, including DFID, FAO, UNDP, UNESCO, UNICEF, UN Women, and the World Bank.

'I am excited to take up this position. UNU-WIDER is a unique actor operating in the crossroads of high-quality science, Global South policymaking, and the UN fora. As someone who is highly motivated to change the world, I look forward to supporting the institute to deliver its mission the best I can', Patricia Justino emphasizes.