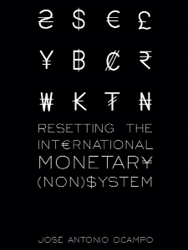 This panel will discuss the reforms that are necessary to build an adequate international monetary system for the twenty-first century. This includes:

The discussion will analyse, in particular, the proposals included in the recent UNU-WIDER-OUP book Resetting the International Monetary (Non) System by the Chair.

José Antonio Ocampo is a Professor and Director at the Economic and Political Development Program at the School of International and Public Affairs, and Fellow of the Committee on Global Thought at Columbia University. He has occupied numerous positions within the UN. Professor Ocampo was awarded the 2008 Leontief Prize for Advancing the Frontiers of Economic Thought, and the 1988 Alejandro Angel Escobar National Science Award of Colombia.

Joseph E. Stiglitz is an American economist and a professor at Columbia University. He is also the co-chair of the High-Level Expert Group on the Measurement of Economic Performance and Social Progress at the OECD, and the Chief Economist of the Roosevelt Institute. A recipient of the Nobel Memorial Prize in Economic Sciences in 2001 and the John Bates Clark Medal in 1979, he is a former senior vice president and chief economist of the World Bank and a former member and chairman of the (US president's) Council of Economic Advisers. He is the author of numerous books, and several bestsellers.

Valpy FitzGerald is Emeritus Professor of International Development Finance at Oxford University and Professorial Fellow of St Antony´s College. His current research focusses on the macroeconomic relationship between income taxation (corporate and personal) and inequality at the national and international levels.   Valpy is a Commissioner of the Independent Commission on the Reform of International Corporate Taxation. He is also Honorary President of the Sociedad de Economía Mundial and was awarded the Gabarrón Foundation International Prize in Economics in 2007.