The Impact of Development Aid and Democracy Assistance

The question of how aid impacts democracy in sub-Saharan Africa is important for both normative and instrumental reasons. Civil and political rights are a part of human freedom and the lack of them constitutes a major deprivation. Furthermore, some research suggests that democratic regimes are more likely to be interested in the developmental outcomes of their citizens.

The most direct way in which development aid has influenced democratic transition is through donor leverage on recipient policy making through political conditionalities attached to development aid. The emergence of this type of conditionality was stimulated by the end of the Cold War and reflected a changing attitude towards the importance of democracy among key donors. By the mid-90s bilateral donors such as Britain, France and the USA also made statements which emphasized the importance of democracy human rights and good governance.

This shift in attitude was reflected in the actions of many donors and during the 1990s, a number of recipient countries faced aid sanctions due to human rights abuses, military coups, rampant corruption or civil conflict. Aid conditionalities were more effective in some contexts than in others as aid interacted with other circumstances to facilitate, or prevent, democratic transitions. Not surprisingly, aid sanctions were typically most effective in countries where an economic crisis or domestic dissent concurrently existed. In addition to this, a high level of dependency on aid was an important factor in determining the effectiveness of these conditionalitieson influencing democratic transitions. Consequently, countries such as Nigeria and Gabon, with access to oil revenue, were less susceptible to being influenced by aid sanctions. Coordinated, rather than unilateral, donor action was also instrumental in influencing political liberalization. 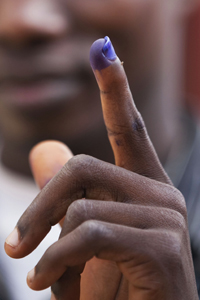 While development aid undoubtedly assisted with democratic transitions in some African countries, there is widespread agreement that it has been less successful in creating a firm ground for democratic consolidation. The paper discusses the role of aid with respect to avoiding erosion and looks at two sub-components of deepening democracy; vertical and horizontal accountability, and competitive party systems.

Democratic erosion often is indicated by deterioration in civil liberties or a lack of disrespect for key institutions, such as the constitution.  Given that democracy assistance comprises only 4 percent of total overseas development assistance (ODA) commitments to Africa and that development aid is much more important for governments’ public policy initiatives, the latter has played a much larger role in preventing democratic erosion than the former.

Donors have threatened to reduce or rescind aid in a number of cases where democratic erosion has seemed likely, for example when some presidents have sought to extend term limits or elections have been rigged. Donor leverage has proven more effective when donors act together and less effective when countries have alternative access to finance. Leverage is likely to be particularly effective in countries which have a high dependency on aid in the form of general budget support as withdrawal of this kind of aid can be highly disruptive and because non-traditional donors, such as China and India, do not provide this type of funding.

A role for democracy aid? - Vertical and horizontal accountability

Democracy aid aims to enhance accountability by increasing the capacity of key political actors and institutions such as the judiciary, legislature, and civil society organizations, as well as mechanisms of transparency such as the media. A significant amount of democracy aid also goes towards supporting electoral commissions, voter registration, and voter education. Since aid aimed at supporting elections generally requires confronting a similar set of challenges across countries, donors are often able to draw on the same set of tools in different contexts.

One criticism of the way in which democracy aid is distributed is that there is an overemphasis on elections to the detriment of other elements of democracy. To be effective, opposition parties and civil society organizations need to have the capacity to hold governments accountable between elections, as well as around election time. Moreover, the decision by donors to work with civil society, rather than political officials, can legitimize civil society groups at the expense of elected officials. 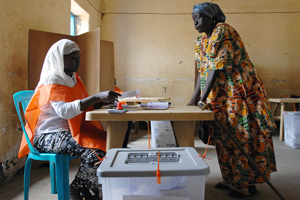 While the findings on vertical accountability remain mixed, there is some evidence that development aid may indirectly undermine horizontal accountability. Aid in the form of budgetary support is rarely approved by national parliaments.  Governments may inform parliamentarians of donor arrangements through the budget but will often leave parliamentarians with little time to discuss the budget in committee meetings or to obtain access to technical advice. For example, the World Bank's evaluation agency found that its budget support rarely involved consultation with legislatures or civil society. This has the effect of altering the balance of power inside countries in favor of executives.

As with accountability, democracy aid plays a more direct role in fostering competitive party systems while development aid has a more indirect effect. The aims of democracy aid in this area are to reinforce parties’ organizational and financial capabilities, foster transparent and democratic modes of selecting party leaders, assist with the development of party platforms, and create a well-defined membership base and grassroots networks.

The main difficulty with party promotion is that it requires donors to tackle the inherent power asymmetries both between and within political parties. This can often provoke negative reactions from host countries. Furthermore, party aid is often given to parties who have some representation in parliament, including ruling parties, which can have the effect of maintaining or reinforcing existing inequalities between ruling parties and the opposition.

Many donors adhere to the division between civil society organizations and political parties. The support to the former is much higher. Consequently, democracy aid has done little to improve the relationship between the two. This is detrimental to party competition since without greater linkages to civil society; parties fail to establish the grassroots support they need to expand their bases. In addition, party aid is often viewed as highly electoralist and is therefore provided within a very short time frame around elections.

Development aid is not intended to affect political parties but it can have some indirect negative influences on the competitiveness of the party system. Incumbents can take credit for donor projects around elections, general budget support can allow governments to increase expenditure before elections and, if fungible, allow incumbents to purchase campaign resources which give them an advantage at election time.