Improving the quality and availability of healthcare in developing countries has long been seen as an important development goal by the international development community. Development assistance for health (DAH) has increased by a factor of five over the past two decades, up from US$5.82 billion in 1990 to US$27.73 billion in 2011. This dramatic increase in funds has naturally raised questions about the way in which the aid is delivered and how effective it is.

Project aid
Project aid is aimed at specific purposes, such as building new hospitals or training more healthcare workers, and is normally delivered independently of the central government of the recipient country. With project aid, donors have control over the design, monitoring, disbursement, and accountability procedures. The success of any aid project, particularly when aimed at healthcare, only becomes apparent over time as the impact of these interventions take time to be seen. While project aid is often initially assessed to be successful, later evaluations show that the long-term impact is limited.

Project aid has also been criticized for the high transaction costs it entails, and for the fact that it does not put ownership of the development process into the hands of the recipient country. These concerns were reflected in the Paris Declaration of 2005 which encouraged donors to shift towards a programme-based approach to aid delivery such as sector-wide approaches (SWAPs) and budget support.

Budget support
Budget support in particular is a form of programme-based assistance which has growing support, both in theory and in practice. Budget support involves donors providing aid directly to a recipient government’s budget based on an agreement about certain aspects of how the aid will be spent. Clearly control of how ODA is spent will improve country ownership of the aid process. However it also raises questions about whether the aid will be used for its intended purpose. The success of budget support is largely dependent on the quality of governance and the policy environment in the recipient country.

Both aid modalities have achieved some level of success, and both have their limitations. Project support has the benefit of being well targeted but comes with high transaction costs and is often ineffective in the long term. Budget support gives the developing countries more control over the development process, but in doing so makes the effectiveness of the aid more reliant on the quality of governance. 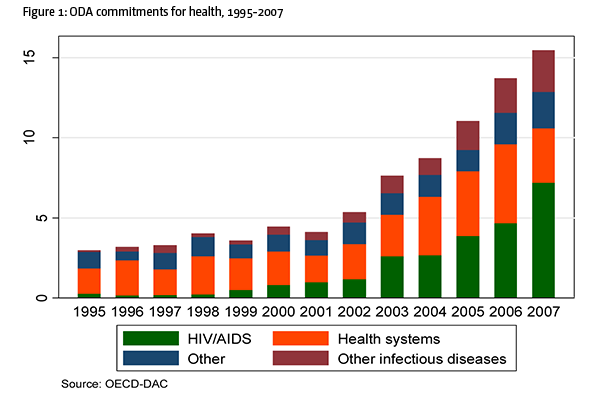 Aid allocation
Aid is not always directed to where it is most needed. This occurs in part because donor motivations are not purely altruistic, but there is an array of drivers behind development assistance. Allocations of DAH may be made as part of national security policy to, for example, help prevent the spread of infectious disease, or to enhance the donor country’s foreign policy and trade objectives. This has also led to donors crowding around certain countries and certain causes which are seen as strategically important. A particular example of this in the fact that HIV/AIDS receives significantly more aid per disability-adjusted life years than other conditions (figure 1.). Misallocation of funds directly limits aid effectiveness, as DAH will have less impact than it would have if distributed according to need.

Aid fragmentation
The phenomenon of donors crowding around particular countries represents another source of limitations on the effectiveness of DAH—aid fragmentation. Poor and stable countries—often called ‘donor darlings’—suffer most from fragmentation. In 2007 Tanzania had 1,601 aid projects, most with their own reporting and management systems. Fragmented aid delivery creates costs for recipient countries that have to deal with multiple donors and projects simultaneously. The direct cost of recipient countries having to spend considerable amounts of money and time managing and overseeing projects is one such cost. There are also indirect costs. The presence of a large number of aid agencies in a country can drain the recipient country of local staff, lead to excessive staff time being spent in training, and cause projects to be duplicated. DAH would be more effective if donors improved the co-ordination of their aid delivery in such a way as to avoid these problems.

Unpredictability
Unmet policy conditions, donor administrative problems, recipient government delays in meeting conditions, and political problems in the donor country, all contribute to a lack of aid predictability. This unpredictable nature of aid hinders the ability of recipient governments to plan their budgets, which in turn makes managing the long-term process of healthcare development difficult. Furthermore, the unpredictable nature of DAH discourages governments from making long-term commitments to health spending, whereas the lack of such commitments increases the likelihood of aid intended for healthcare being used elsewhere in the budget. Similarly when continued funding is not assured governments are more likely to use aid to cover recurring costs rather than for investment. Ultimately aid that is unpredictable is less likely to be spent effectively than aid which is delivered in a timely and reliable manner.

Aid fungibility
Aid is fungible when it substitutes rather than supplements local spending. If a donor gives a country a certain amount of DAH and that country responds by reducing their own spending by an equivalent amount, then the DAH will not have the desired effect of increasing spending on health. Fungibility is a persistent problem, particularly in the healthcare sector, with many studies showing that DAH is often used for purposes other than those intended. Estimates of the extent of fungibility in the health sector for every dollar spent vary from a decrease in US$0.27-1.65.

However there is ground to think that fungibility is not as big a problem as is sometimes perceived. Some level of fungibility is just the natural result of donors and recipients having different preferences, and some argue that by focusing on this almost inevitable feature of aid, larger issues are missed.

While the limiting factors identified above are relevant to most low-income countries, ensuring that health aid is effective requires adapting these principles to take into account local context. The most successful projects and programmes are those that give local partners real ownership over the development process.