Research Brief
The Cost of Climate Change in Vietnam

Three of Vietnam’s characteristics make it particularly vulnerable to man-made climate change. First, Vietnam’s economy is highly dependent on agriculture, and climate change may negatively impact farm revenues. Second, the country is located at the end of several trans-boundary river basins, and climate change may influence river flow in undesirable ways either through changes in precipitation/runoff patterns or by altering the behavior of upstream countries. Third, Vietnam’s low lying coastline is vulnerable to rising sea levels, which when combined with increased storm-surges, may lead to further population displacement and significant infrastructure damage.

It is predicted that Vietnam’s temperature will rise 1.5 ºC above a historical baseline by the 2040s and the country is expected to become slightly more arid as a result of climate change. To understand the total cost of climate change it is important to consider the cumulative effects of the different ways in which it will impact different sectors of the economy. Agriculture, transport, and hydropower generation are all likely to be affected by a change in temperature and precipitation, and, sea level rises (SLRs) and an increase in the damage caused by cyclones may have further adverse impacts on these sectors.

UNU-WIDER research project ‘Development under Climate Change’ estimates the total cost of climate change by adopting a multi-sectoral approach and considering the full range of climate projections over the period 2007–50, and compare the reasonable baseline trajectory for growth and structural change. 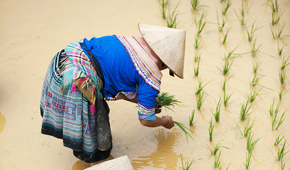 When considering only changes in temperature and precipitation climate change has a fairly small impact on agriculture. The impact is modest for two reasons. First, the projected temperature and precipitation changes to 2050 are not sufficiently large to substantially reduce yields on average. Second, and importantly, agriculture is expected to decline as a share of Vietnam’s economy regardless of any effects of climate change.  As agriculture becomes less significant, so do variations or reductions in agricultural output.

In contrast to agriculture where climate variation may influence production in a given year but not necessarily over time, the impact of climate change on roads will be cumulative in nature and consequently may be relatively large. If a road is washed away, not only is the initial investment lost, but the negative effect on infrastructure remains until the road is rebuilt, and rebuilding roads diverts money away from the construction of new roads. Therefore, climate change will reduce the rate at which new road stock is accumulated which in turn slows the rate of productivity growth. The majority of road damage estimates for the period 2007–50 fall between US$4 billion and US$9 billion. UNU-WIDER research indicates that it is more cost effective to adapt roads to climate change now, that is, seal unpaved roads and make them more precipitation- and flood-resistant.

The consequences of climate change in terms of changing rainfall patterns and higher evapotranspiration in combination with higher demand from farmers for irrigation water could reduce the flow volumes in Vietnam’s rivers. Climate change is particularly expected to reduce runoff in northern regions such as the densely populated Red River basin.

Vietnam’s hydropower generation capacity is predicted to decrease only slightly by 2041–50. After current projects are completed, Vietnam expects to have a total annual hydroelectricity capacity of about 42.76 terawatt hours, but estimates of the reliability of hydropower generation to meet this annual demand vary considerably.

The impacts of SLRs shift the distribution of GDP outcomes downward across all scenarios. Between 18 and 38 centimeters of SLR are expected by 2050. The two main drivers of losses from SLR are loss of agricultural land and loss of road infrastructure. More SLR implies more losses. In particular in regions, such as the Red River delta area a significant portion of land could become permanently inundated and the economic cost of SLRs could be as high as 10.9 per cent of GDP. Over the country as a whole rising sea levels could result in losses of the equivalent of 2 per cent of Vietnam’s GDP.

The best available current assumption is that the frequency and intensity of cyclones will not change due to climate change, at least out to 2050. As a result, the climate change related impact of cyclones is restricted to the interaction with SLRs. As sea level rises, the storm surge associated with cyclones will reach much further inland and be more powerful thus causing greater capital damage. A direct cyclone strike in an area of concentrated economic activity (such as the Mekong or Red River deltas) combined with the upper range of SLR (38 centimeters by 2050) could cause considerable damage, particularly if the cyclone is powerful.

The total cost of climate change

All else being equal Vietnam’s GDP is expected to exceed US$500 billion by 2050, which means that the losses caused by climate change are large in absolute terms. GDP losses are grouped within the range of US$6–15 billion in present value terms. These losses provide clear incentives for adaptation policies designed to reduce climate change damages. Moreover, the findings suggest that there is a window of opportunity for Vietnam to benefit from pre-emptive action.