Blog
Does women’s education reduce rates of death in childbirth?

Every single day, approximately 830 women die from causes related to childbirth. Despite considerable advances in maternal health over the last three decades (Hogan et al. 2010) as well as worldwide commitment to reducing maternal deaths, sufficient reductions have not been achieved. These deaths are overwhelmingly preventable provided that timely access to appropriate obstetric care and contraceptives are available (Ronsmans and Graham 2006; Ahmed et al. 2012).

Boosting girls’ education may be an important policy lever in curtailing the 830 deaths occurring every day.

The newly defined Sustainable Development Goals (SDGs) aim to address this failure and reduce the rate of maternal death to 70 per 100,000 live births by 2030, from 210 per 100,000 today. Meeting this goal requires advances in the poorest and least developed countries, which have by far the highest rates of maternal mortality world-wide. Our research suggests that—in addition to addressing health infrastructure, accessibility in remote regions, and work with marginalized groups—boosting girls’ education may be an important policy lever in curtailing the 830 deaths occurring every day.

The immediate causes of maternal mortality are pregnancy-related complications such as pre-eclampsia, bleeding, infections and unsafe abortion. To the extent that educated women are more likely to adopt simple and low-cost practices to maintain hygiene, are more able to react to symptoms such as bleeding or high blood pressure, more likely to access the information on abortion and place of abortion, and more willing to accept treatment and trained birth attendants, education may plausibly cause declines in maternal mortality.

World-wide, rates of schooling and literacy have increased substantially over the past century. Similarly, and particularly since 2000, rates of maternal deaths in childbirth have fallen by an impressive amount. Generally speaking, as the years of education among women rise, rates of maternal death in childbirth fall (see Figure 1). Nevertheless, these correlations may represent many external factors, including changing rates of national investment in health and education, economic growth, the strengthening of national institutions or a demographic transition.

Figure 1: Rates of maternal mortality and years of education (1990-2010): All countries 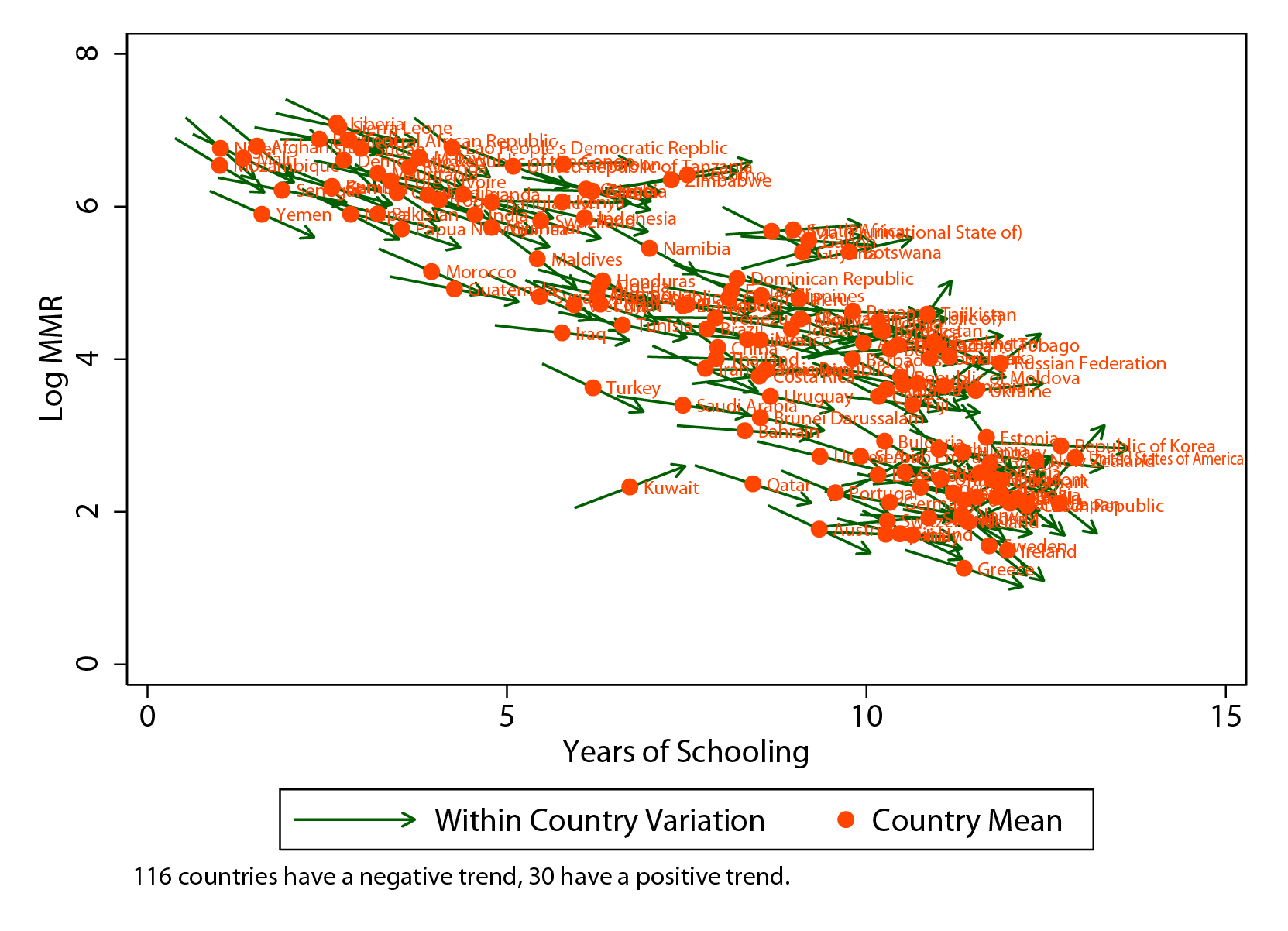 Second, our results suggest that not all increases in women's education bring about the same effects. Attaining basic health knowledge at low levels of education may have important effects on an individual’s likelihood of dying in child birth. Moving an additional one per cent of women into primary education (from no education) would reduce rates of maternal death by between 5-8 deaths per 100,000 live births (see Figure 2), which is four per cent of the mean value of maternal death during the period under study. The additional effect of moving women into secondary education is significant, but lower in magnitude, while the effect of moving women into tertiary education is not significantly different to zero.

All in all, the study shows through estimated effects that comparable changes—that is, one standard deviation movement in each variable—in women's primary education and GDP per capita would have an impact of similar magnitude on rates of maternal death. This is important, given that recent WHO fact sheets on maternal mortality highlight differences in maternal mortality ratios by income, but not education level.

Figure 2: Conditional effect of changes in primary schooling and the maternal mortality ratio 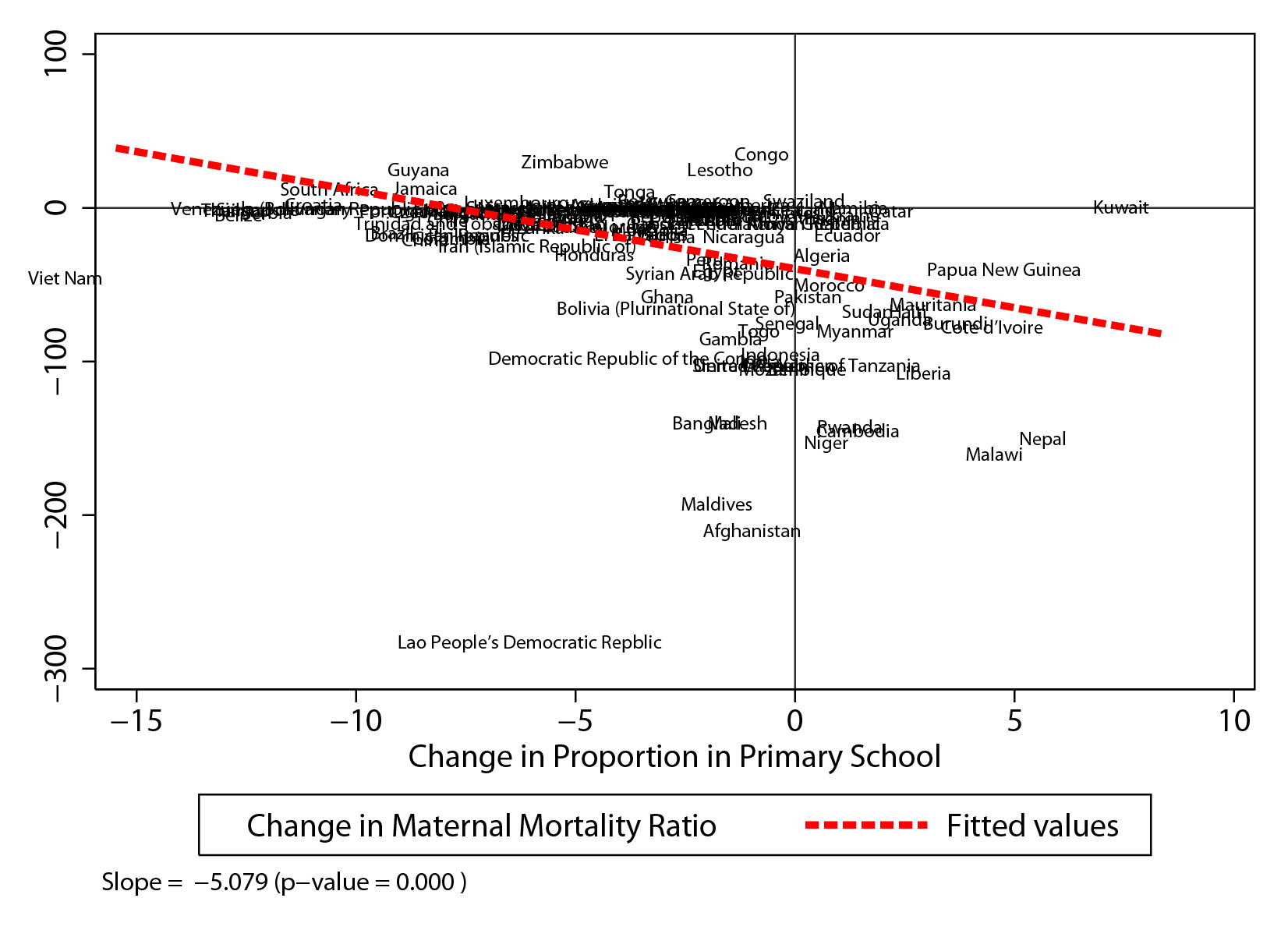 Effects of education seen clearly in countries with educational reforms

The findings hold true when we look specifically at countries that have sharply expanded educational attainment. For example, in the case of Nigeria (a Universal Primary Education reform) and Zimbabwe (a lower secondary school reform), cohorts of women affected by the education expansions had significantly lower levels of maternal mortality later in life as compared to those who were otherwise similar, but not impacted by the educational reforms. This was most pronounced when the reform moved women from no schooling to primary schooling.

There are a number of reasons by which women’s education may reduce rates of maternal death, with recent work by Ashraf et al. (2012, 2014) pointing to empowerment (or women’s bargaining power) as a potentially relevant mechanism. If women have relatively more education compared to their partners, they may be more likely to choose to have, and achieve, fewer children, and hence be at lower risk of dying in childbirth.

If women have relatively more education compared to their partners, they may be more likely to choose to have fewer children.

In our study, we found that, as suggested by Ashraf and colleagues, education is particularly effective when it allows women to ‘catch up’ with men. When women become more educated relative to men, they report being less likely to be involved in partnerships with men who want more children than they do, which in turn has considerable follow-on effects to rates of maternal death.

Maternal mortality rates need to be reduced by two-thirds over the next 15 years to meet the Sustainable Development Goals. Our research, discussed above, shows that a focus on girl’s education may be one means of meeting this objective. Quality education for all is also an important human development goal in its own right. Indeed, its inclusion as a Sustainable Development Goal itself means that crosscutting relationships between education and other indicators make investments in quality schooling and learning a particularly important and cost-effective global goal. Achieving gender equality in India: what works, and what doesn’t

Poverty and wellbeing in Mozambique

Poverty and wellbeing in Mozambique
Next

A few months ago, I was asked to deliver a lecture at the Vienna Institute for International Economic Studies on the UNU-WIDER Government Revenue Dataset (GRD)...
What can the GRD do for policymakers?