The achievement of universal education was one of the objectives set out in the Millennium Development Goals. Improving educational access has the potential to elicit significant monetary and non-monetary rewards both for the individual and for the wider community. Aid could play a vital role in helping developing countries to increase enrolments and improve educational quality.

Measuring how effective aid is at improving education is difficult. This is the case for a number of reasons. First, one key measure of the effectiveness to education is enrolment level. However, assessing the effect aid has in this area is problematic due to the possibility of reverse causality—it may be the case that countries with higher enrolments tend to attract more aid. Second, the existence of complementarities between different education sectors makes the impact of aid to any one sector hard to identify. Third, aid may substitute government funding for education rather than supplement it. If governments are willing to spend money on education anyway then aid is unnecessary to achieve higher education outcomes.

However despite these difficulties some things are known. For instance, research clearly shows that the effectiveness of education aid is to a large degree dependent on the stability of the institutions in the recipient country. For example in Malawi, a country that receives high levels of aid and has stable institutions, primary school enrolment rates have climbed from 21 per cent in 1975 to 66 per cent in 2010. However in Liberia, a country with weak institutions, completion rates have fallen from 69 percent in 1976 to 62 percent today, despite high levels of aid.

While most studies show a modest positive relationship between education aid and enrolment, the estimated effects are rather low and are sensitive to  specifications of the statistical model. Furthermore, the focus of much research is purely on primary enrolment and less is known about aid’s impact on the social outcomes of education—better citizenship, honesty, and social cohesion. While it is difficult to assess the overall effectiveness of education aid, it is far easier to identify the problems that undermine efforts to successfully implement the programmes it funds. 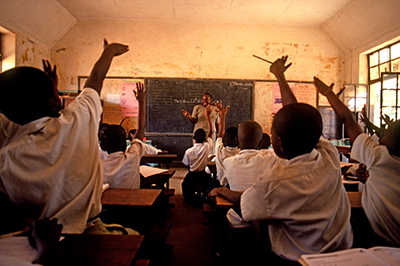 Institutional imbalance and overlap
There is both imbalance and duplication in the mandates of the many institutions involved in education aid. Just as an example, in Kyrgyzstan the Asian Development Bank and the World Bank both launched education textbook projects in the same country, with the result being that one part of the country used ADB-sponsored textbooks, while the other used World Bank-sponsored textbooks.

Data collection Capacity
Education systems cannot perform professionally without reliable information, but there is a widening gap in the ability of countries to collect data, with the result being that in many instances information about education systems is unreliable. For example, there are no accurate counts of school attendance by student age, no accurate information on unit expenditures, little evidence of trends in academic achievement and wide variation in their quality from one part of the world to another.

Funding shortfalls and aid volatility
UNESCO’s budget (US$989 million a year) is about half the budget of an US research university. The portion of World Bank allocated to education is only 4 per cent, a level no higher than it was 20 years ago. In addition to being insuffi cient, education aid varies in parallel fashion with domestic priorities, and military and commercial interests. There are also many examples of education aid being diverted, as well as instances of graft and corruption pervading the education sector. 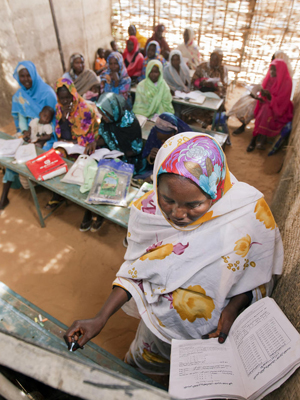 Dependency
In many countries, education aid has created dependency. In 2008, overall aid was greater than 10 per cent of GDP in 21 countries in sub-Saharan Africa and exceeded domestic public spending in one out of three countries. In terms of education assistance, aid constituted 70 per cent of the domestic education budget in Gambia, 66 per cent in Mozambique, 60 per cent in Kenya, 55 per cent in Zambia, and 51 per cent in Rwanda.

Inconsistency
China received US$697 million in educational aid in 2007, while India received US$423 million. Yet these countries have sufficient resources to finance space programmes, nuclear arsenals, and militaries of significant size. The question is why these countries cannot finance their educational requirements by reordering their domestic priorities.

Improving education aid
Any attempt to improve the effectiveness of education aid should begin with broadening the scope of education aid beyond the current fixation on basic education. Educational sectors are interdependent and all donors should be aware of this when deciding how to target their aid. Furthermore international development agencies such as UNESCO should attempt to live up to their real mandate and speak to education problems and challenges worldwide, including in the USA, Europe, and the industrialized democracies.

Another key to improving education aid is gathering the necessary data to monitor and evaluate the changes in education policy. This is commonly resisted by recipient countries, perhaps on the grounds that aid for data and research is lower in priority than aid for more tangible products and services.

However without such data the higher priority aid will remain untested and unimproved. Currently only the World Bank has the resources to provide the lion’s share of the analyses on which projects are based however more control could be put in the hands of regional development banks, recipient countries, and UNESCO.

Finally, in recent years basic education has become largely universal and gender equity in education access is close to being realized. Attention has shifted from providing access to education to providing quality of education. Policy makers now must turn their sights on what the next half-century of education aid can realistically accomplish in an imperfect institutional environment in which there are significant and legitimate demands for the allocation of scarce resources toward domestic needs.

Working Paper | International Organizations and the Future of Education Assistance