The importance of equality

The active participation of women is by no means established across all countries in the Middle East and North Africa (MENA) . Moreover, the recent rise of Islamist parties in some MENA countries creates new concerns about the fate of gender equality.

The MENA region has substantially reduced gender inequality in education and health outcomes in recent years, but the role of women in the policymaking process in these countries remains limited. Even when women are in parliament they do not have the ‘critical mass’ necessary to facilitate change.

The question of critical mass is an extremely important one, as when women have significant political participation, there is a stronger push for gender equality more broadly, especially in health and education. Only with much higher levels of parliamentary participation than currently exist in most MENA countries will women be able to play a role in designing and implementing major policies and laws. Foreign aid to women’s equality organizations and institutions can play a crucial role in enhancing women’s ability to shape policies and laws in their countries.

The MENA region has some of the highest restrictions on women’s civil liberties in the world, and progress on promoting women’s political empowerment over the last several years has been uneven. Only about one parliamentarian in ten is a woman in the region, although, as Figure 1 demonstrates there are wide disparities across the MENA countries. Moreover, in spite of the increasingly widespread gender equality in voting in elections, MENA women are sometimes unable to practice their right to vote in order to gain political empowerment. 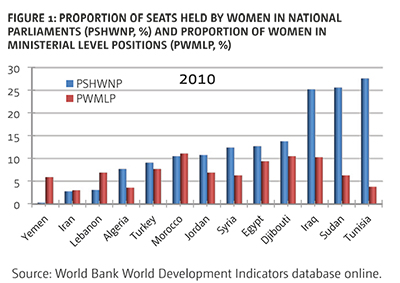 The relationship between aid and empowerment

Given the lack of women’s political participation in the MENA region it is important to consider the role aid could play in helping to improve this situation. Evidence from 13 countries over the period 2002-10 indicates a number of interesting trends.

In contrast, there is no evidence that countries which received higher amounts of aid targeting reproductive health and family planning have stronger women empowerment. That is, these types of aid do not appear to increase the number of women represented in parliament.

In the presence of higher adolescent fertility rates, more aid for women’s equality organizations and institutions is associated with a lower proportion of seats held by women in national parliaments. Female secondary school enrolment does not seem to have an effect on women’s political empowerment.

The more autocratic a regime, the fewer women in parliament in this region. This suggests that the region’s autocratic regimes generally do not provide the type of institutional environment necessary to support women’s political empowerment. 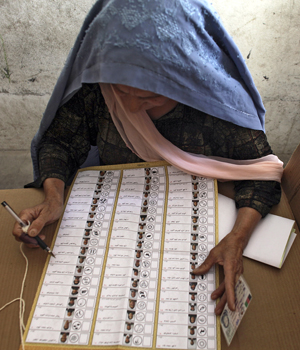 Given the effectiveness of aid to women’s equality organizations and institutions in promoting women’s political empowerment, donors should increase this type of aid. Private donors should also target these groups, especially at the community level and among non-governmental organizations.

Because increased female political representation is associated with significant changes in policy making with women’s issues receiving much higher priority, foreign aid to women’s equality organizations and institutions could play a catalytic role, especially in improving health and education policies.

Similarly, given that aid to women’s equality organizations and institutions has been more effective than aid targeting family planning and reproductive health, donors may wish to consider the extent to which the former might address the latter. If donors promote women’s political empowerment and higher parliamentary representation through aid to equality groups, the increasing number of female parliamentarians would likely support policies that tackle high fertility rates and other issues of importance to women. Thus, donors could have an indirect yet potentially greater impact than with, for example, aid to family planning alone.

Finally, in order to better understand the positive effects of aid to women’s equality organizations and institutions on women’s political empowerment, future research should examine the channels through which this aid is distributed, and its various uses. In particular, by identifying the activities that are fully or partially financed with this aid and how they actually promote equality, donors can help ensure that gender remains a development priority amidst the many competing discussions that take place about inequality reduction. Surveys and micro-level studies of disaggregated foreign aid can help shed light on these issues.