The World Bank’s thresholds dividing countries into low-, middle-, and high-income countries are used by donors to make crucial aid decisions, albeit often with additional indicators including whether to consider ending aid programmes. These thresholds are outdated and require revision not least because the majority of the world’s poor now live in countries officially classified as middle-income. It is therefore useful to look more carefully at the current state of global poverty and its implications for overseas development assistance.

The distribution of poverty

The world’s poor have not moved. Instead, the countries where many of the poor live have experienced drastically rising average incomes, while poverty has not fallen in absolute numbers.

Table 1 shows the proportion of global poverty in low- and middle-income countries during 1990–2008. 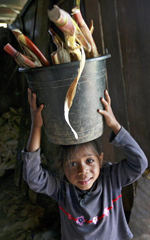 Such a shift is important because donors may consider that middle-income country classification is a reason to reduce or even to end aid. Thus, for donors to focus on these categories risks resulting in a divorcing of aid from the bulk of world poverty.

More positively, higher levels of average per capita income imply substantially more domestic resources available for poverty reduction and greater access to private capital markets, so a change in the forms of aid would be advisable.

Although, many of the world’s extreme poor may already live in countries where the total cost of ending extreme income is not prohibitively high as a percentage of GDP, constraints remain relating to differing patterns in economic growth, differing state and sub-national state capacities and capabilities, and challenges in mobilizing support for redistributive policies among a domestic population, the majority of which may be insecure. Thus, development assistance still has a role, most notably in concessional lending, co-financing, and policy coherence.

Donors will likely face a world in the future where, for all but 15 to 25 of the poorest countries, ‘traditional’ development aid, meaning bilateral resource transfers, is no longer in great demand. Instead, a new kind of multilateralism is required rather than simply terminating relationships between donors and MICs, based on three foundations.

Second, civil society, in particular in middle-income countries (as well as governments), may have an increasing interest in promoting growth through a process of inclusion or participation via employment. Working with advocacy groups and civil society actors as well as national and sub-national governments to influence policy on matters such as public spending priorities and regional planning and regional resource allocation, for example, is one avenue through which external development actors could pursue broader aims of poverty reduction, especially so if the remaining poor live in sub-national regions or social groups less well connected to the growth process.

For some in middle-income countries, such policies could be seen as unwelcome interference in domestic affairs and political. Alternatively, donors working in sub-national low-income regions or with low-income groups might be more welcome if their work was accompanied with policy coherence commitments and takes a focus on spatial inequalities in particular (which are often related to social inequalities).

Third, donors could co-finance global and regional public goods with middle-income governments—notably large capital expenditures such as infrastructure. This strategy could be useful due to the high up-front costs of these investments as opposed to their long-term benefits. Such goods can help compensate for the negative effects of global public ‘bads’, such as diseases, climate change, and financial shocks.

These changes in how aid is targeted and delivered will also have implications for donors themselves. First, it is important to revise the threshold categories that donors use to make decisions regarding aid. A new definition should emphasize better issues such as structural characteristics and the total poverty gaps relative to GDP, amongst other indicators. Donors could also apply any country thresholds instead to sub-national units in order to target low-income provinces within middle-income countries.

In addition, new aid models may imply some significant restructuring of aid ministries in OECD countries. Rather than large aid ministries with an existing portfolio of projects, programmes, and spending, new donors may be more effective if they take the form of smaller, cross-governmental administrative units with unequivocal mandates across government; have strong technical capacity; and are staffed by people with substantial skills in political sensitivity and working with national governments and non-state actors.

Donors should also cultivate relationships with middle-income country governments and international fora, such as the UN, and notably the G20. This has the potential to extend into joint development co-operation programmes between OECD donors and new middle-income donors in low-income countries.