Around the world, hundreds of millions of people suffer from malnourishment and food insecurity. Despite pledges at the World Food Summit in 1996 to reduce by half the number of the world’s hungry, recent figures indicate that the number of undernourished people in the world had actually increased since the meeting, with the total number of undernourished people in the world in 2009 being 1.023 billion. With continued population growth rates in the developing world, additional funds will be required to improve current agricultural productivity, as well as to anticipate future alimentary requirements. Further exacerbating this dire situation, the FAO predicts that climate change may cause a decline of between 9 and 21 per cent in agricultural productivity in developing countries by 2050.

Given the urgent food security situation and detrimental climate change predictions, it is imperative that climate change mitigation and adaptation measures be incorporated into an increased number of agricultural development strategies, particularly those reliant on foreign aid. This UNU-WIDER study examined the important role foreign aid plays in achieving the joint objectives of development, mitigation and adaptation of agriculture under climate change by examining which strategies have been successful, which strategies could prove effective in the future, and how lessons learned can be scaled up and transferred to additional countries.

Since the 1980s, agricultural productivity has been decreasing. Low prices and market failures have caused investors to become more reluctant to allocate funds to this important economic sector. Adding to declines in the private sector, foreign aid earmarked for agriculture also experienced a falling trend for several decades. In fact, agriculture aid reached a low of 5.4 per cent of all aid from 2003 to 2005 until the current food crisis issued a wake-up call to donors. With current projections forecasting a world population of 9.1 billion by 2050, global agricultural production must increase by 70 per cent in order to provide adequate food for the world’s growing population. This dramatic increase does not even take into account necessary changes to address the effects of climate change on agriculture.

What kind of financing is available to combat the effects of climate change on agriculture?

There are now several global funds to address concerns over climate change; financing for these funds is obtained through multilateral channels under the United Nations Framework Convention on Climate Change (UNFCC). Additionally, climate change funds outside the UNFCCC are also being created to address both mitigation and adaptation issues. While this increased funding is certainly impressive, the amount of climate change funds allocated to agricultural sectors remains a tiny fraction of the total allocated to climate change programmes. By 2030, US$7 billion annually will be allocated to agriculture in developing countries. Unfortunately, this falls short of the estimated US$20 billion per year that will be needed at that time.

A combination of development, mitigation and adaptation strategies is needed to address climate change in agriculture 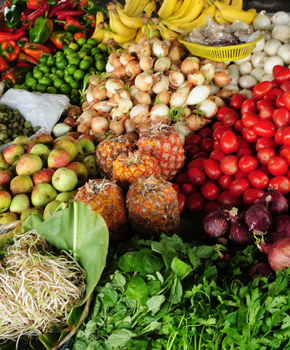 Once foreign aid funds are secured for the agriculture sector, a comprehensive plan to incorporate development, mitigation and adaptation measures must be undertaken. Successful mitigation techniques financed by foreign aid have included: the reduction of nitrous oxide emissions; the reduction of methane from paddy fields; soil carbon sequestration; and scaling down carbon dioxide emissions through improved farming practices and technology.

Propositions for the future role of foreign aid

It is evident that a record of success has been established by using foreign aid to combine climate change measures and agriculture development in the areas described above. But how can future aid be used most effectively to minimize the effects of climate change on agriculture? This study proposes that foreign aid can be most useful in four areas.

Once these programmes prove successful, they can be scaled up by expanding existing conservative management practices to an increasing number of regions using additional funding provided through foreign aid channels.

The knowledge and experience acquired through successful foreign aid intervention in one country can then be disseminated to others to mainstream climate change adaptation into national development strategies. Through this process, additional networks of South-South co-operation can be developed and knowledge shared and transferred more readily.