A curse or a blessing?

Much has been written on India as an outlier in Global Value Chains (GVC). Despite being one of the largest and fastest-growing markets located in direct proximity to ‘Factory Asia’ (Baldwin, 2008), India is documented to have low participation in global networks, especially amongst South Asian economies. This is due to the stagnant growth of its manufacturing sector, low ability to attract FDI in manufacturing, domestic-oriented markets, and R&D levels (Ray & Miglani, 2020). Further, its existing GVC linkages are in low value-added manufacturing tasks, underscoring the need for Indian GVC participating firms to climb up the manufacturing export chain ladder. While India is a global exporter of ICT services, Indian ICT firms engage in low value-added activities, carrying out mundane labor-intensive tasks like coding and body-shopping (Pattnayak & Chadha, 2019).

In this blog, I find a gradual shift of India’s VC trade in both manufacturing and services from the Global North towards the Global South, mirroring the rise of ‘polycentric trade’ (Horner & Nadvi, 2018). China, in particular, has overtaken the US to emerge as India’s biggest trade partner in the first half of the financial year 2020-21, with India’s long-standing dependency on pharmaceuticals, heavy machinery, and telecommunications. A shift in India’s geography of GVC trade may present new opportunities as well as challenges for firms to undertake economic upgrading. South-South (SS) value chains may offer higher opportunities for product upgrading but the jury is still out on whether SS value chains offer overall better economic upgrading opportunities than North-South (NS) value chains.

India’s value-added trade flows across partner shares reveal an interesting trend: Indian manufacturing GVCs are shifting South (Figure 1), particularly from Europe towards Asia. The share of manufacturing foreign value-added (FVA) in India’s domestic final demand originating from the Global North declined from 60% in 2005 to 50% in 2010 to 43% in 2015, while that originating from Southern partners increased from 27% in 2005 to 38.6% in 2010 to a further 45% in 2015. A closer look at the data reveals that the largest decline has been in the case of Europe as the share of manufacturing FVA originating from this region declined by 10 percentage points between 2005-2015, while that from East and South-East Asia increased by 14.5 percentage points.

A similar trend can be observed in the case of domestic value-added (DVA) by India’s manufacturing in foreign final demand. Its share in the case of Northern partners has declined by almost 10 percentage points in the period 2005-2015, while that in the case of Southern partners has increased from 15% to 23%. This shift is primarily from Europe to China. Indian manufacturing’s DVA share in Europe’s final demand declined by 5.15 percentage points between 2005-2015, while that in China increased by 3.3%. 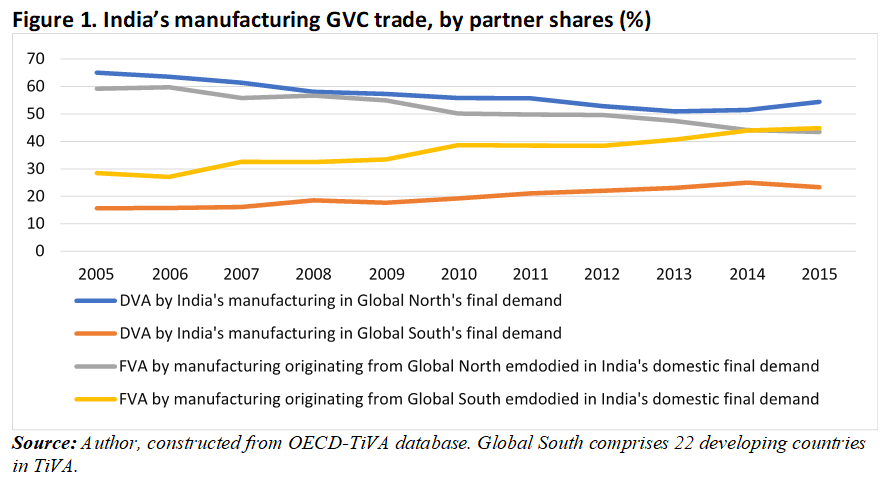 In terms of shifting geographies, a similar trend can be observed in India’s service value chains. Figure 2 shows that the DVA by India’s total services in Global North’s final demand declined from 68.5% to 63% in 2005-2015, while FVA by services originating from Global North in India’s domestic final demand declined from roughly 70% to 58.5%. In contrast, the DVA by India’s services to Global South’s final demand increased by 16.8 to 20% between 2005-2015, while FVA by services originating from the Global South increased from 16% to 27% (Figure 3).

ICT services account for almost 40% of India’s total services exports, and around three-quarter of IT services are delivered digitally i.e. via the internet. Just 10 countries make up 64% of India’s total ICT exports, with data from 2017-2019 revealing a dominance by countries in the Global North, particularly a 33% share of the U.S., followed by Singapore (6.2), UK (5.2) and Switzerland (4.0) (Figure 4). However, India’s linkages in ICT services value chains also demonstrate a shift towards the Global South (Figures 2 and 3). It is further noted from the data that DVA by Indian ICT services in Germany and UK’s final demand declined by 3.45 and 2.65 percentage points respectively between 2005-2015. Of the 22 Southern countries examined, India’s DVA in final demand increased for 15 of the 22, with the highest percentage point increase in China- from 3.11% to 4.58%. 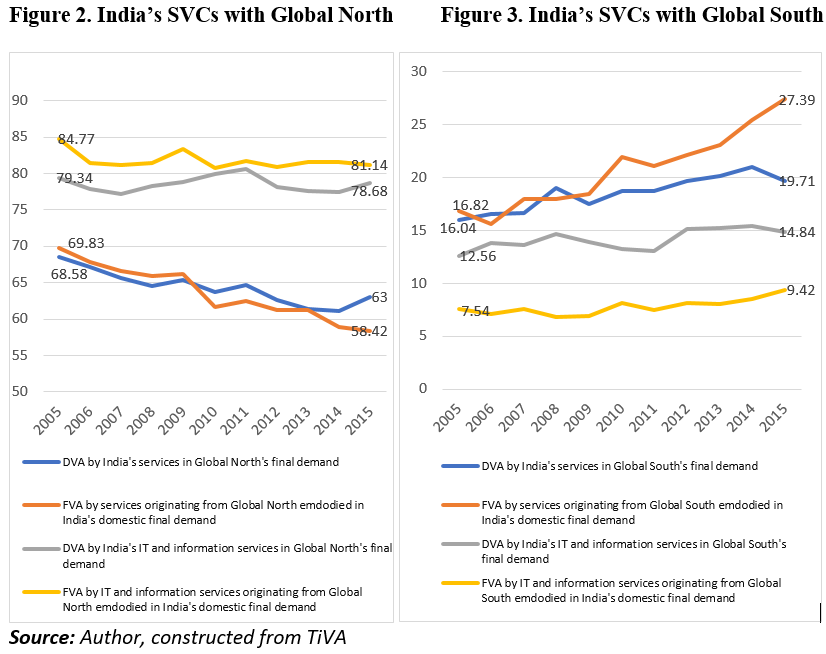 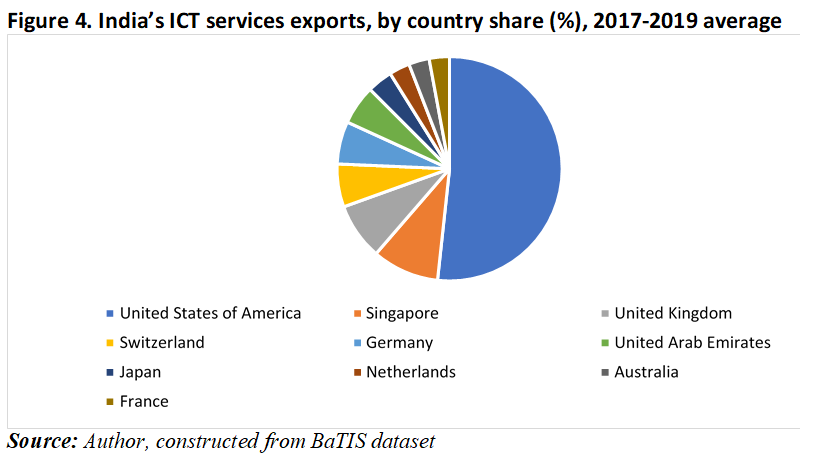 This southern shift in India’s GVC trade could be due to several factors, including pull factors such as the growing importance of large domestic markets in the Global South and the emergence of ‘lead’ firms in the South- for instance, Huawei in China and Mahindra and Mahindra in India. However, rising digitalization and automation of manufacturing production in the Global North, in the context of a persistent global digital divide, could be a factor pushing away Indian firms from GVCs led by Northern lead firms. Although India continues to lag other economies in the digitalization of manufacturing, digitalization in Indian manufacturing can significantly boost export intensity (Banga & Banga 2020) and product sophistication (Banga, 2021). At 3 robots per 10,000 workers, India’s robot density is significantly below the world average of 74 (IFR, 2020). The Covid-19 pandemic is likely to further accelerate global manufacturing automation to mitigate supply-chain risks in the future, potentially leading to re-shoring of manufacturing by Global North from less digitally integrated Indian firms.

This article was originally published by Research Network - Sustainable Global Supply Chains and is re-printed here with permissions. Click here to view the original article.

Navas-Alemán, L. (2011). The impact of operating in multiple value chains for upgrading: the case of the Brazilian furniture and footwear industries. World Development, 39(8), 1386-1397.

This article was originally published by Research Network - Sustainable Global Supply Chains and is re-printed here with permissions. Click here to view the original article.

Grandads, dads, and sons: Examining multigenerational mobility in India
Next