On the rise again

Since 1989, inequality in Mexico has risen, declined, and risen again. The evolution of labour income inequality is at the core of this pattern. To reverse the current trend of rising inequality, access to secondary and tertiary education should continue to expand, minimum wages should be increased, and the tax and cash transfer system rethought.

Mexico is an upper-middle-income country with a Gini coefficient hovering around 0.5 which places it among the high inequality countries. Since the mid-1980s, Mexico has become more open to international trade and undergone changes in production technology. In addition, its labour force became considerably more educated: the proportion of individuals with primary education or less declined from 67% in 1990 to 33% in 2015, and the share of individuals with a college education more than doubled between 1990–2015 when it reached around 15%. The last thirty years were also marked by a significant increase in social spending and a retooling of social programmes. 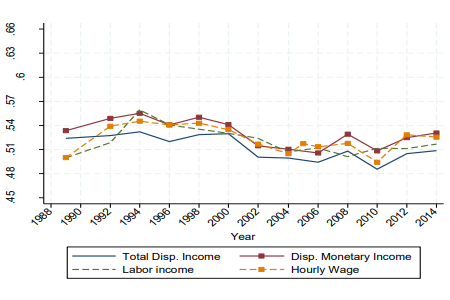 During 2006–14, inequality appeared to be on the rise again. While the incomes of all workers fell as a consequence of the Great Recession, the returns to low-skilled workers fell more pronouncedly. Demand for workers with low skills appears to have suffered disproportionately during the years of negative or low growth.

Given the patterns observed in the dynamics of labour income inequality, two key policy implications emerge. First, continuing the expansion of access to higher education (post-secondary and tertiary) is key, as is ensuring that the education is of reasonable quality. Second, minimum wages should be increased to the levels prior to their decline in the 1980s.

Cash transfers to the poor in decline

Direct cash transfers in Mexico are largely targeted to the poor. However, despite the expansion of targeted programmes since the second half of the 1990s, their effect remains limited because of their small scale. Moreover, the redistributive effect has declined significantly since 2010 as transfers have become less progressive and indirect taxes have increased.

The modest redistributive impact of Mexico’s fiscal system is due to a minimal allocation of resources to cash transfers that benefit the poor. Even at their peak (2014), these transfers represented just 0.8% of GDP, with just 0.35% of GDP going to the poorest quintile (which roughly corresponds to the extreme poor). More importantly, the expansion of indirect taxes and indirect subsidies and recent reduction of direct transfers has meant a continuous reduction in net cash benefits reaching the extreme poor, from 0.38% of GDP in 2012 to 0.19% in 2016. The reduction of transfers reaching the extremely poor after 2012 has thus completely reversed the expansion of these benefits that were achieved over the previous decade (2002–12).

The increase in indirect taxes would have been an effective basis for a powerful redistributive reform of the fiscal system had it been used to finance a significant increase in transfers targeted to the poor. Instead, it was used to substitute declining oil revenues and to finance the expansion of regressive contributory pension subsidies. 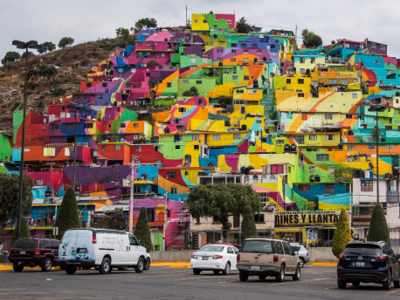 Given the coverage that Mexico’s flagship conditional cash transfer programme has already achieved (6 million households, or a fifth of the population), and the possible economic disincentives that a significant expansion in the level of transfers per beneficiary might entail, a major expansion while preserving its current targeting and effectiveness may be difficult to achieve. In addition, some results indicate that the errors of exclusion—that is, poor individuals who do not receive the Prospera cash transfer—are rather significant.

Perhaps the time has come to consider more universal transfers. If all the resources devoted to non-progressive transfers could be reallocated to a universal basic income scheme, this reform would be highly progressive. Of course, the inequality- and poverty-reducing effect of these resources would be higher if they were allocated to the poorer segments of the population but targeting mechanisms appear to have run their course.

However, the political resistance to a pro-poor reallocation of the transfers that currently also benefit the non-poor could prove insurmountable. An alternative and bolder policy scenario would be to finance the universal basic income through new taxes. The fiscal cost of a basic income that equalled the current poverty gap would be 2.87% of GDP.

Continuing the expansion of access to higher education—including tertiary education—is key, as is ensuring that education is of reasonable quality

A highly progressive reform would be to reallocate all the resources devoted to non-progressive transfers to programmes targeted to the poor (such as the now defunct Prospera), or to raise personal income taxes from the richest and implement a universal basic income equal to the average poverty gap