Kosovo and East Timor both experienced regional peace enforcement operations to end violent conflict in 1999, followed by massive operations in which they essentially became trustees of international actors. However, while the state and economy are gradually becoming stronger in East Timor, Kosovo continues to be plagued by high unemployment, low growth, corruption, and organized crime.

Aside from their recent conflicts, the two states share many other similar characteristics. Both states are very small territories that sought to secede from a larger entity—both enjoyed opposition leaders with significant domestic and international legitimacy; both are poor territories with rich neighbours; both underwent non-UN peace enforcement missions to stop the violence; and in both the enforcement operations were followed by large, complex UN neotrusteeship operations. The UN allocated very similar budgets for the two operations. While there have been neotrusteeship efforts in Cambodia, Bosnia, and Sierra Leone, the comparison between Kosovo and East Timor is particularly useful as these cases represent the two most intrusive attempts at international neotrusteeship to date, where international actors took over the basic functions of the state.

That said, there are also some key differences between the two. Kosovo has received nearly three times more development assistance overall than has East Timor. East Timor is endowed with natural resources, a weak government, a less educated population, and a less developed infrastructure. It is primed to be ‘resource cursed’. East Timor is ethnically very diverse, but Kosovo suffers from deeper and more entrenched ethnic rivalries that have been magnified by international disagreement and divided neotrusteeship responsibility. The differing development outcomes of the two states can be linked not only to variations in their prior circumstances, but also to the divergent international strategies employed in each country. 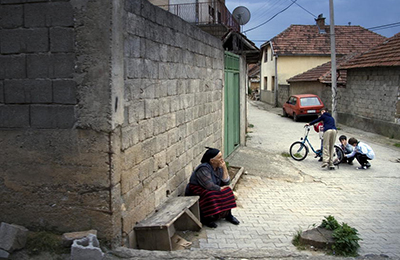 The case of Kosovo

Neotrusteeship
In Kosovo, powerful neighbours with interests in the country’s stability set up a neotrusteeship—a combination of international and domestic governance structures, through which foreign powers assume responsibility for the domestic political authority and economy. Despite expectations, these massive efforts, costing more than US$14 billion, have not lead to a less fragile state. Kosovo has received more assistance than any other similar territory in the world, and yet it remains by far the poorest and least developed country in Europe. International organizations have successfully improved the security situation, but the economic and social conditions remain dire.

This working paper argues that Kosovo has suffered from a lack of steady international and domestic leadership. Aid to Kosovo has been delivered in several major, complicated, and shifting forms, including most notably from the UN Interim Administration Mission in Kosovo (UNMIK), NATO, and the European Union. The command structure of UNMIK was not hierarchical, well co-ordinated, nor united—it has been difficult to understand who is in charge, and what they are charged to do. Moreover, domestic leadership has also been divided. Kosovo’s Serbs and Albanians have both made sovereignty claims, and created parallel state administrative structures that primarily serve one ethnic group. Finally, Kosovo’s legal status as an independent state is contested domestically, regionally, and internationally.

In the absence of final authority, organized crime and corruption have flourished, while development has lagged behind.

The case of East Timor

Neotrusteeship
East Timor also came under neotrusteeship, but the results have been unquestionably better than in Kosovo. While the UN’s mission made some early blunders by excluding local actors from their efforts, the mission became more inclusive over time. It was ultimately successful at implementing its mandate of peace-keeping and transferring governance responsibilities to domestic leaders. 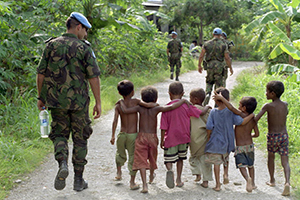 East Timor, the UN Transitional Administration (UNTAET) was in charge of all aspects of international trusteeship, with a more simplified overall structure than in Kosovo. Unlike Kosovo, East Timor’s neighborus—Indonesia and Australia—did not take the lead in rebuilding the state, although Australia has helped to maintain security. The local population and elites were, in general, favourably predisposed toward the UN in East Timor; UNTAET’s tasks were inherently open-ended; and they related more to development than security issues.

Overall, neotrusteeship can be an effective means of assisting states as they move out of conflict. However, dividing the leadership, and therefore the authority, of such efforts can lead to a situation in which no one is in control.

In the case of Kosovo, neither the international community, nor Kosovo itself, have benefitted from divisions of leadership between the UN, NATO, and the EU. The failures in Kosovo cannot be attributed solely to ethnic tensions given that cross-ethnic criminal organizations in the region have managed to thrive.

In other words, cross-ethnic co-operation in Kosovo is entirely possible, given the right incentives. The divided leadership failed to put these incentives in place.

In contrast, the UN led a fairly successful operation in East Timor that was unified, non-self-interested, short term, and well funded. This mission may be held up as a promising model for future such efforts.