In the WIDER Working Paper ‘Decentralized Service Delivery in Nairobi and Mombasa: Policies, politics and inter-governmental relations’ Winnie V. Mitullah assesses the major obstacles to providing critical services, such as solid waste management and water, in Nairobi and Mombasa. She argues that the two key obstacles to effective service delivery by authorities are the proliferation of overlapping actors, and some negative aspects of inter and intra-party politics.

Mitullah’s paper is part of the UNU-WIDER project ’Decentralization and Urban Service Delivery: Implications for Foreign Aid’. The project focuses on the effect political decentralization has on urban service delivery, looking in particular at situations where authority is vertically divided. That is when the party in power locally differs from the party in power at the national level. Mitullah’s work focuses on the effect that vertically divided authority has on service delivery in Nairobi and Mombasa. However as well as looking at the effect of inter-party politics, she also points to problems of intra-party politics caused by decentralization.

The proliferation of actors

Both Nairobi and Mombasa have access to local funding, as well as transfers from central government. However both are struggling to provide adequate services to their constituents. Winnie Mitullah argues that one of the key barriers to effective service delivery in both Nairobi and Mombasa is the lack of clear frameworks outlining how services should be delivered, and the multiplicity of actors involved in service delivery. She illustrates this by focussing on the problems associated with two key services; solid waste management and, water and sanitation. 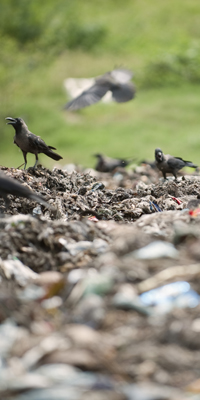 In 2005 it was estimated that around 70 per cent of the solid waste generated in Nairobi was not collected. The Nairobi City Council also tended to favour the more affluent areas of the city, and neglect informal settlements which generate a large amount of solid waste. This is partly caused by the variety of different actors involved in providing services in different areas due to the decentralization of control to wards. Affluent areas are generally well served by city authorities and private companies, whereas poorer areas rely on small firms, youth groups collecting garbage, community organizations, self-help groups, and individual providers. The lack of coordination between these groups has caused a number of problems, with, for example, firms and groups piling up garbage at collection points on the wrong days.

A recent audit found that that the city’s failure to effectively manage solid waste management was due to the lack of a strategic framework. With multiple actors involved in waste management this lack of a framework has led to a reliance on ad-hoc and spontaneous approaches. Furthermore a long chain of command and long bureaucratic procedures cause severe delays in service delivery and lead to uncollected waste. Further tension is caused by the allegiances different local councillors have to different groups. Some councillors benefit from providing contracts to private service providers, whereas others are associated with youth groups that provide garbage collection as a source of income. Consequently decisions are not always made with effective service delivery as the number one priority.

The majority of solid waste in Mombasa ends up in illegal dumpsites as only a small proportion of the 750 tonnes of waste generated each day is collected for safe disposal. Waste management differs from Nairobi in that control is not decentralized to the wards. Instead waste management is largely undertaken centrally by the city council. However there are again various groups involved, and while outsourcing to private companies is supposed to be an exception, it is fast becoming the norm. Consequently a lot of waste management is done on an ad-hoc basis which leads to loop holes which are subject to abuse.

Sector reforms started in 2003 commercialized the delivery of water and sanitation services, and also gave cities greater control of water and sanitation management. However despite these reforms there is still no unitary and harmonized service delivery in Nairobi and Mombasa. Mitullah points out that there other problems both cities face such as inadequate water supplies, inadequate infrastructure and drainage, and inequality in the quality of service due to consumers’ differential ability to pay. These inefficiencies have encouraged more private service parties to start operating in the city on the basis of market principles, only providing services to those who can afford them, with the ultimate goal of making a profit. Many of these providers are owned by councillors, who thus clearly compromise the delivery of public goods in favour of the pursuit of personal gain. In effect, the proliferation of private providers has both dampened the local government’s commitment to provide water as a public service, and has also made achieving equitable delivery more difficult as demand exceeds supply.

The negative aspects of inter and intra-party politics

Major cities represent the seat of economic powers, and as such controlling them is important to political parties. This leads to a scramble for power in cities, including Mombasa and Nairobi, with many politicians using local positions as a springboard to enter national politics. Consequently elections are fought over ethnic and party ideology and do not adequately address the challenges of city management. As a result politicians tend to neglect service delivery, as they know they will not be fighting an election over it.

One example of the tension created by intra-party politics in Mombasa is the removal of Mayor Najib Balala in the late 1990s. He was removed because his own party, KABU, saw him as too effective. His attempts to reduce corruption, improve waste management, and improve the image of the city ran counter to aims of many members of his party with entrenched interests in the system as it was. After being ousted Balala joined the ODM party and became minister of Tourism. In 2009 he attacked his own party, then in power in Mombasa, for hindering local development projects in the region. Such power struggles within the party have caused councillors to be divided into opposing camps, thus slowing down improvements in service delivery.

Mitullah suggests that it is the high level of tension between parties that has negatively affected service delivery in Nairobi. Since the country’s 1992 multi-party elections Nairobi has been predominantly controlled by opposition parties. Since then the central government has made deliberate attempts to undermine local government and personal interests and a political machinations have side-line attempts to improve service delivery. These interferences have included the delaying of funds, the ousting of popular leaders, and the nomination of technical experts aligned to the party in government nationally. Such dynamics have undoubtedly had a negative effect on council politics, as various groups oppose each other irrespective of the interests of the city’s residents.

Mitullah finishes by reiterating that the two major barriers to effective service delivery in Nairobi and Mombasa are the lack of a clear framework that coordinates multiple actors, and the continuation of intra and inter-party politics. She suggests that full decentralization requires the full commitment of political leaders at both the national and local levels, and achieving this going forward will be a daunting uphill task.