Does it make a difference?

How could countries in the Global South develop their tax systems further and improve compliance? This analysis shows how two tax administration interventions impacted the number of small business taxpayers and presumptive tax revenues in Uganda.

One-stop-shops — where citizens could register for several authorities at the same visit and receive information — were the most successful policy in registration campaigns. They increased the number of taxpayers by approximately 70%

Developing countries have been able to increase their tax revenue in the last decades, but overall revenues have often remained too low to sustain provision of crucially important public goods. Small businesses are an important part of the economy and an appealing target group for tax authorities in many of these countries. However, as operate mostly in the informal sector they are hard to catch into the tax net.

In Uganda, the informal sector covers half of the economy and only a small fraction of employees work on the formal sector. Broadening the tax base by formalizing small businesses is one important step for enhancing the domestic resource mobilization in the country. 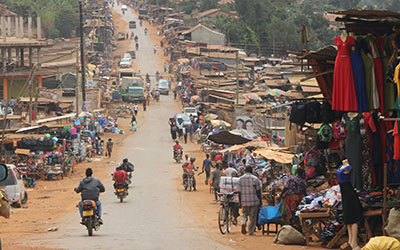 Using administrative data from the Uganda Revenue Authority this analysis compares the number of taxpayers in different geographical areas and industries to uncover the impact of these interventions, whose introduction varied across regions and time. The data covers both presumptive taxpayers and comparable small corporate income tax (CIT) payers.

The results show that both interventions increased the number of small businesses filing their taxes. The analysis indicates that the type of the intervention matters in the taxpayer registration campaign. The number of tax filers increased approximately by 70% when one-stop shops — where citizens could register for several authorities at the same visit — were established, but less than 50% in the first years when TREP mainly included door-to-door visits to businesses.

The new e-filing form had a large impact on tax compliance and it almost doubled the number of presumptive taxpayers after its introduction. In addition, the results indicate that the TREP and the new e-filing system complemented each other. This result is associated with one-stop shops because they not only increased enforcement but also educated taxpayers to comply tax obligations which lowers their compliance costs. 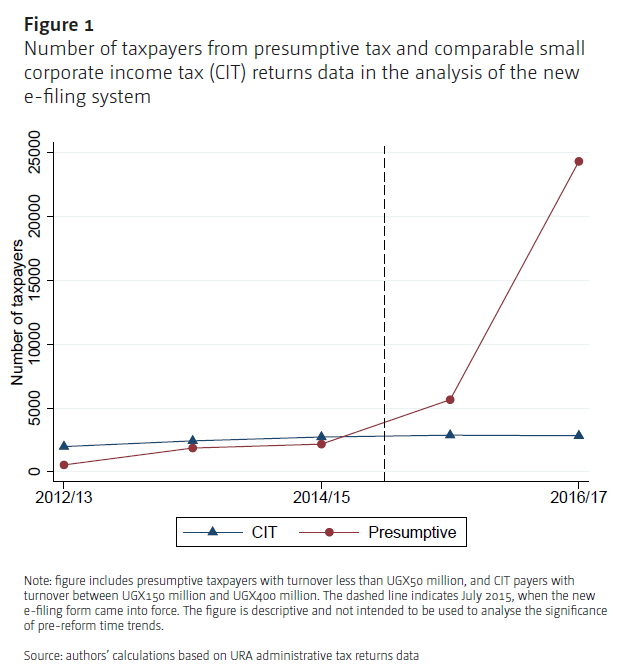 Overall, two interventions enhanced tax compliance, but only for smallest businesses and they did not manage to keep small businesses on board for several years. The reason for this might be the low enforcement capacity of tax officials. In general, enforcement operations in low-income countries with limited administrative capacity focus on large firms from which most of the tax revenues arise.

Finally, the study shows that tax revenue gains from TREP outweighed URA’s budgeted costs for TREP which suggests that the taxpayer registration campaign was a cost-effective intervention. The cost-effectiveness of the new e-filing system was not possible to study because of the lack of information.

These results indicate that easier access to government services —such as tax registration, filing and paying — should be facilitated. In particular, one-stop shops help citizens to register for taxes and they can be provided cost-effectively. Taxpayer registration services should include tax education as a lack of information can hinder tax filing.

One-stop shops are a good way to improve tax compliance as they help citizens to register for taxes, and they can be provided cost-effectively

The electronic tax forms for small businesses should be made simpler than for larger firms, to lower compliance costs of small enterprises

The physical access is not the only solution. Digital services can also play an important role. Findings of this analysis point out that the electronic tax forms for small businesses should be simpler than for larger firms, to lower the compliance costs of small enterprises.