Research Brief
Is technical and vocational education and training a solution for youth unemployment?

Technical and Vocational Education and Training (TVET) is often seen as a silver bullet resolving issues ranging from youth unemployment to labour market-related structural change. This is particularly true for developing countries with deficient basic education and high numbers of youth seeking to enter the labour market each year. Evidence from a first-of-its-kind tracer study of over 1,600 TVET graduates in Mozambique suggests that this important section of the work force faces significant challenges in their insertion into the world of work.

For most Technical and Vocational Training (TVET) students in Mozambique, the transition into the labour market is difficult. By December 2020, only 9% of survey participants had found a permanent job
Those who found jobs were working mostly in areas related to their area of study, but 80% of the jobs were of poor quality

There are significant disparities between the school- to-work experiences of men and women; a higher percentage of women are unemployed, those who did find a job took longer to do so and were offered lower paying jobs

A longitudinal study of more than 1,600 Mozambican TVET students during their initial transition to the labour market was carried out over the period 2019–20. A baseline survey was implemented in 2019 with 20 TVET institutes located across the country. From the start of 2020 through to November 2020, the same participants were contacted four times by telephone to learn about their economic and employment situations.

The transition experience of the survey participants can be divided into three broad groups:

The first group (9%) consisted of participants who managed to find a ‘good job’ — mainly in financial activities, industry, and services. These jobs offer relatively high remuneration and better contractual terms (e.g., fixed contract) than others. Most participants who obtained these jobs studied business administration, mining, construction, accounting, engineering, or education. 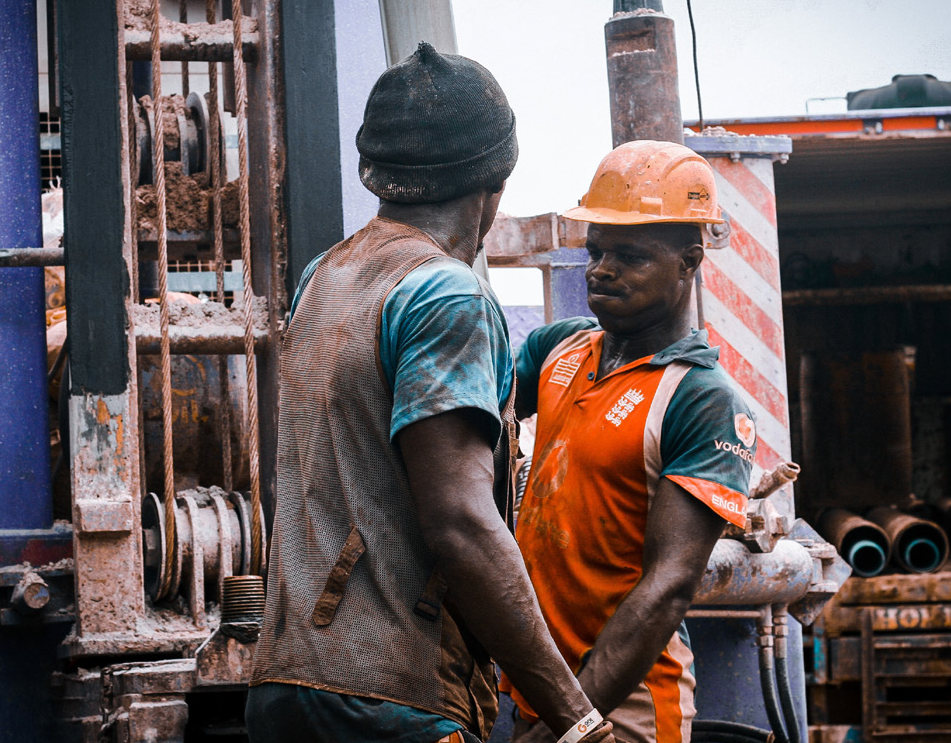 The second group, which constitutes the highest share of respondents (48%), only managed to obtain a ‘bad job’; mostly odd jobs, having a relatively low remuneration and more precarious conditions (e.g., no written contract). Many of these jobs are found in commercial services (e.g., retail).

The third group (43%) is composed of those who did not get a job or worked for less than three months. While 13% of participants were studying, 4% were not looking for a job. By the end of the 11 months, 26% of the respondents were unemployed.

In addition to the general challenges encountered by jobseekers in their transition from technical and professional schools, there are notable disparities between the experiences of men and women. Women, on average, took longer to find a job and their median salary per sector was lower with the biggest wage gap found in the public services sector where it reached MZN5,000 (median).

Labour market conditions were far worse than had been expected by survey participants. Not only were salaries much lower than expected but evidence also shows a significant mismatch between the type of employers they wished to work for and those where they found employment. For instance, while 84% of participants had shown interest in entrepreneurship, they preferred a much more formal arrangement than they found — instead of managing firms, most of them were pushed into informal odd-jobs.

The survey results show that successful job-searching strategies were mainly informal; 47% of first jobs (56% of last surveyed jobs) were found with help from friends and family. Formal non-school-related channels (media, newspaper, employment agencies) are much less effective (7% of first jobs and 8% of last jobs found this way). It is important to point out the relative importance of schools and teachers in the placement of people trained in TVET, having assisted 21% of respondents to find their first job. 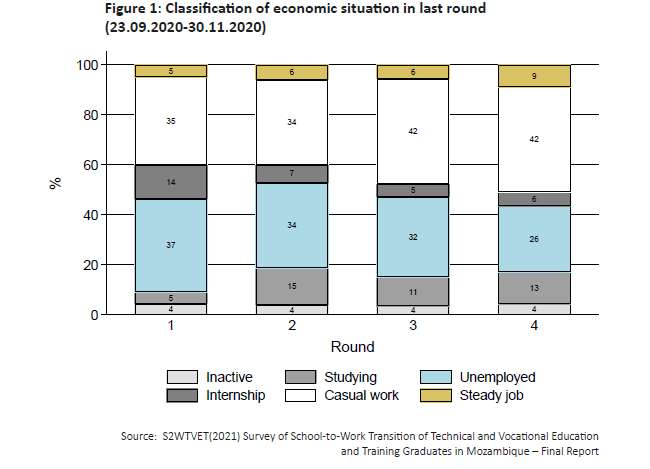 The survey results show that COVID-19 had a great impact on the labour market. Most respondents reported a negative impact of the pandemic, including the difficulty in finding jobs and reduced working hours. The closing of schools was also reported by many as a COVID-19-related difficulty, reflecting the fact that many respondents continued their studies.

What solutions are needed to improve the situation?

The survey results indicate a need for new policy solutions to improve the school-to-work transition of TVET graduates in Mozambique.

First of all, it would be beneficial to promote free access to jobseekers to information on job and professional internship opportunities, including the salary range of the offers. Such measures would allow graduates to make more informed choices and would protect jobseekers, especially women, from potential discriminatory recruitment practices. One possibility is to develop a digital internships platform to facilitate broader access to professional internships.

There is a need to allow jobseekers free access, to information on job and professional internship opportunities, including information on the salary offered (e.g., salary range)

The apparent weaknesses in the demand for qualified personnel calls for further analysis of demand-side needs, and better dialogue between employers and technical schools

What is also needed, given the apparent weaknesses in the demand for qualified personnel, is a further analysis of the labour requirements of existing (and future) firms, as well as support for a better dialogue between employers and technical schools.

In addition, the prevalence of low-quality jobs found by graduates while working for third parties, often in breach of labour laws (e.g., no contract or no contribution to social security) suggests a need for stronger and more effective regulatory oversight. This is especially critical for those working in commercial services.

This research brief is based on the Survey of School-to-Work Transition of Technical and Vocational Education and Training Graduates in Mozambique – Final Report by Sam Jones, Ricardo Santos and Gimelgo Xirinda. The study has been carried out within the programme Inclusive growth in Mozambique — scaling up research and capacity.