A large share of the population in Zambia is living below the national poverty line, with most of them being extremely poor. In a bid to improve the social and economic situation, the Zambian government introduced the Social Cash Transfer (SCT) programme which provides cash payments to poor and vulnerable households. In addition, other programmes deliver support to specific population sub-groups, but they are only available in selected districts.

As a means of greater poverty reduction, the government initiated the Cash Plus reform in 2019. Cash Plus builds on the current social protection system but aims for a more integrated approach by streamlining administrative processes of various programmes (also referred to as ‘single window services’). The SCT would act as the floor benefit, and additional complementary benefits (mostly based on existing programmes) would be added to take the multidimensionality of poverty into account.

In order to find out the best method to renew the social protection system, the government of Zambia recruited tax and benefit experts to make an impact assessment. The Cash Plus assessment took advantage of MicroZAMOD, the tax-benefit microsimulation model for Zambia. 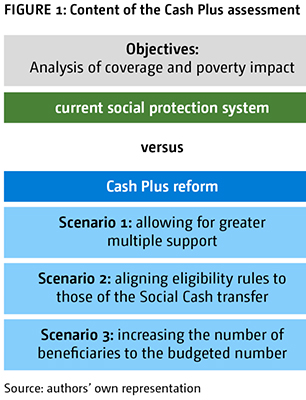 In the assessment MicroZAMOD was used to first analyse the coverage and poverty impact of the current social protection system, and secondly to assess to what extent potential Cash Plus policy reform scenarios can further support reducing poverty. Figure 1 summarizes the content of the assessment.

Extremely poor urban dwellers are in the weakest position

The results of the assessment show that Zambia’s current social protection system provides support to 76% of the extremely poor population. Among the extremely poor, only 34% receive  SCT. The coverage of other programmes is often small as they are not always available in all districts and are restricted by limited resources.

Among the extremely poor, old-age individuals, individuals with a disability (two relatively small groups of the Zambian population) and female-headed households have the highest chance to receive support given that they are specifically targeted in various programmes. Least supported are people who are extremely poor and living in urban areas.

The current social protection system reduces poverty by 4 percentage points, and by 6 percentage points in those districts where additional programmes have been rolled out. The poverty impact of social support varies across population sub-groups with the highest poverty reduction for old-age individuals and individuals with disability (10 percentage points) who are individually targeted by SCT. The impact is comparably lower for younger age cohorts and urban households.

The results on the current social protection system highlight the need for reform to achieve greater poverty reduction in Zambia. Overall, coverage of extremely poor is relatively high but coverage by the SCT as the envisaged floor benefit in the Cash Plus reform is comparably low and the benefit amount often too little as it does not take the household composition into account. See Figure 2 for summary of the assessment findings.

Cash Plus reform is not enough

The Cash Plus reform in theory offers the potential to better reach those most in need and to achieve a greater poverty impact through multiple support. Currently, administrators often refrain from giving more than one programme to the same household and instead choose to support a larger number of households. This paradigm is sought to be changed through the Cash Plus reform.

However, simulations show that this requires more than promoting the importance of multiple support among administrators, the alignment of eligibility rules to those of the SCT and reaching the budgeted number of recipients in each programme.

Consequently, also the poverty impact remains rather stable across the different Cash Plus reform scenarios. Only a very small number of households benefits from multiple support given that additional programmes — which would complement the SCT floor in the Cash Plus reform — are often not available in all districts and the number of recipients is restricted by tight budgets. However, the small group that does receive higher support after the reform is much more likely to move out of extreme poverty than before, suggesting that such a reform can led to greater poverty reduction if it was rolled-out on a larger geographical scale and available to a much larger number of beneficiaries.

In the 7th National Development Plan, the Zambian government defined the objective to reduce poverty by 20%. The results of this assessment highlight that the Cash Plus reform will not be able to achieve the additional poverty reduction needed to reach this target. In this regard, the government needs to focus on SCT reforms to achieve further reduction in poverty.