Blog
What should Mozambique do with the revenue from natural gas projects? (Part II)

In an effort to kick-start an evidence-based public debate over this question, we asked our trainees in the Inclusive Growth in Mozambique programme to brainstorm alternative possible uses for the countries newly discovered natural gas revenues and to present them at a poster session during our annual conference and public forum on natural gas.

In part one of this blog we looked at two suggestions, by Isa Chiconela (medical coverage for all people infected with HIV), and Edson Mazive (universal cash transfer programme for the poor). In this second part of the blog series we introduce interventions proposed by Gimelgo Xirinda (improving the access to quality secondary education) and Esmeralda Napaua (investing in pre-primary education). 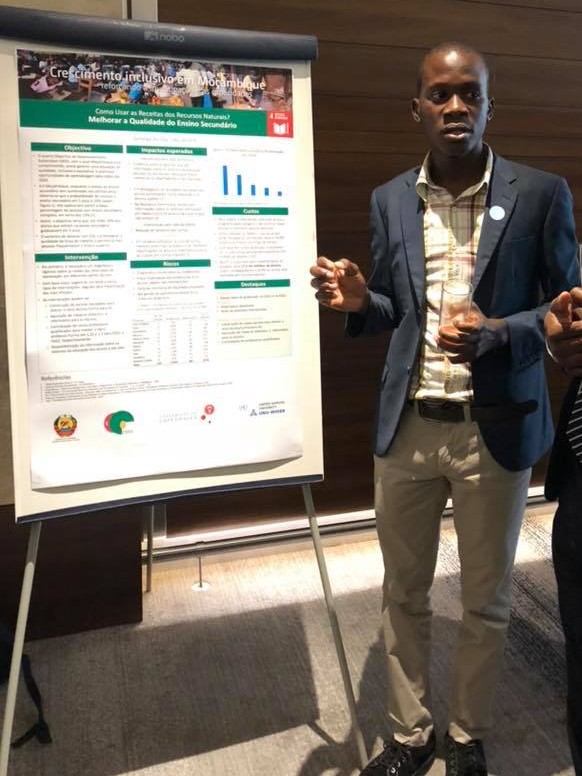 With the revenues from natural gas projects Mozambique should improve human capital by prioritising secondary education. In practice, this would mean investing in school infrastructure and building new schools, hiring qualified teachers, and rigorous research to identify other reasons behind the high failure rates.

The main outcome expected from this intervention option would be a higher completion rate by 2040, with 90% of students in secondary education completing their studies within five years. Moreover, an increase in secondary education attainment could strengthen the labour force and enable more people to pursue higher levels of education.

Based on my own estimation, by 2040 about 120 new schools and 20,000 additional staff would be needed. The estimated cost of this intervention is about US$17.6 billion, which corresponds to 34% of the expected additional natural resource revenues.

The poster session provided me with the opportunity to interact with others and discuss the feasibility of different interventions. There are those who argue that secondary education may not yield practical results — that it will all depend on the later decisions that students make. Therefore, perhaps, the best alternative would be to invest in technical courses that give students the skills they need to enter the job market with ‘know-how’. In my opinion these options are not mutually exclusive. Public investment can be made for secondary and technical education.

1.What could Mozambique do with the projected additional revenues from natural resources?

Mozambique could invest in pre-primary education. Although there have been significant improvements in primary school enrolment rates, children continue to start school late. One of the reasons why parents take their children late to school, mainly in rural areas, is that they consider them still too young. Quality pre-primary education would prepare the children to start primary school.

To invest in pre-primary education in Mozambique would in practice mean the following:

2.What would the expected outcome of such an intervention be?

Such an intervention would lead to children with better skills and improved readiness to start primary school. This could improve their results and make them more able to continue learning throughout their lives. Furthermore, this is an investment in human capital which is an important factor in economic development.

3.What are the estimated costs of the intervention?

The estimated cost of this intervention is US$5.7 billion, which is 11% of the total estimated amount of revenues from natural resources (US$50 billion by 2050).

4.What did you learn from the poster session?

In a country like Mozambique almost all interventions will have a significant impact in the development process. I realized that the areas we think of as top priorities are often those that constitute a problem for us and those surrounding us. This made me reflect on the dilemma faced by the decision makers who must ensure that their proposals are the ones that will tackle the biggest problems faced by the population. In the case of education, it is not enough to look only at pre-primary education. We must invest in the entire system to guarantee that the gains are not lost. Furthermore, we must also look at poverty, health, and nutrition. Otherwise the investments made in education will just be wasted.

The blog series is based on posters that have been prepared before Cyclone Idai hit Mozambique. However, the posters and the blogs are based on long-term calculations, and the recent disaster does not influence the conclusions and suggestions presented in the posters. What should Mozambique do with the revenue from natural gas projects? (Part I)
Next