Research Brief
What Works? – Lessons from Aid to Education

Since 1999 over 50 million more children have been enrolled in primary school, there was a significant reduction in the number of children not attending school, and a marked improvement in access to education for girls in primary education. Education aid has certainly played a role in supporting the worldwide education sector to achieve these improvements. However, the quality of education is still very low in many developing countries, and aid, alongside governments in developing countries, could do more to rectify this problem.

There is a clear gap between what aid does, and what it could do when it comes to improving education in developing countries. While aid has played a key role in increasing the number of enrolments in primary education, it has been less successful when it comes to improving the quality of education received. Evidence shows that for aid to be effective at improving educational quality in the long-term, a system-wide approach involving more actively the governments of recipient countries would be needed. However, driven by the desire for quick and demonstrable results, donors still rely heavily on project aid which limits the capacity of donor money to build sustainable institutional capacity. 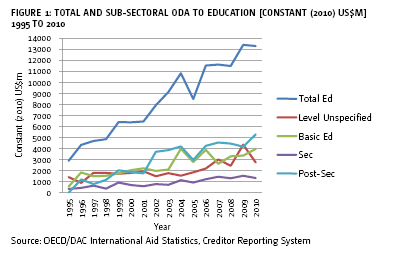 Many of the principles of effective education aid match those laid out in the Paris Declaration on Aid Effectiveness; however a survey in 2010 showed that five years of progress on those goals has been slow at best. To understand what could work better in foreign aid to education it is important to go beyond barriers to progress by fostering national ownership and delivering assistance beyond project aid.

Capacity building in education, that is increasing the technical skills and expertise of the individuals involved in delivering and administering education, both in the classroom and in the education ministry, is a key part of a more systemic approach to improving education. However capacity cannot be developed without significant buying from stakeholders in the recipient countries, and to date this is rare. This is partly because the key concern for donors usually is that their capacity development programmes are completed as planned, and that the success of these programmes can be easily demonstrated. This leads to a focus on short-term achievements, and causes donors to seek to control the process of capacity development to such an extent that, for instance, reforms are never integrated into the normal running of the education ministries.

Clearly donors cannot be held accountable for ensuring that leaders and policy makers in the recipient countries take ownership of capacity development programmes. However, without ownership from stakeholders, aid’s contribution will be lessened considerably, given the lack of sustainability of the capacities developed. When donors drive the capacity development agenda, ministry officials may well agree to the proposed projects and work with donors to help achieve their objectives, and staff may well be trained. The likelihood of the overall ‘system’ improving remains low, as the evidence to date consistently and repeatedly confirms. When education ministries do not have ownership over capacity development, then there is no incentive to ensure that any improvements made are sustained over time. 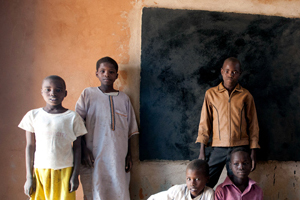 National statistical offices and data collection systems are an integral part of capacity development efforts. But the lack of ownership means that often the reporting to donors is seen as the primary purpose of the newly developed capacities. If, or when, the purpose is to ‘supply’ data to donors for ‘their’ accountability rather than for the ministry’s own targeting and resource allocation, then the plans and policy analysis can quickly become alien instruments rather than tools that enhance the government’s ability to respond better to its own needs for information and its use. The importance of national ownership is well known. If education aid is to achieve all that it could, then this is something that donors need to collectively address.

The failure of project aid

Project aid can never make more than a partial and limited contribution to long-term development due to its fragmented nature. This is true in the education sector too. Donor-led capacity development, which takes the form of identifying gaps and filling them, may be working towards competencies but evidence shows that this approach typically is unsustainable. As well as simply being ineffective, the persistence of project aid also makes the goal of donor harmonization more difficult to achieve. Many countries suffer from a proliferation of donors, all prioritizing different sub-sectoral projects without adequate thought to how individual improvements will affect the education sector as a whole. Despite this, nearly half of total aid flows to education were delivered as project aid in 2010. The aid is given either with lip service paid to the international commitments on aid effectiveness, or with rationalizations as to why project aid is the appropriate approach in the particular case. 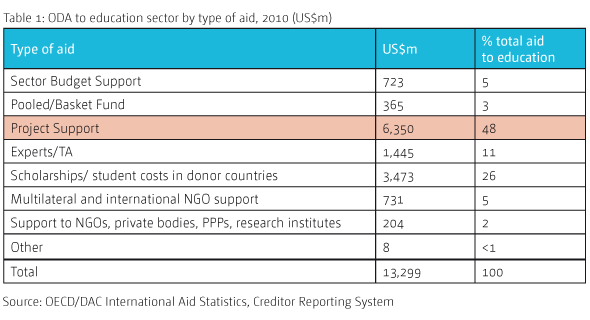 Moving towards alternative methods of delivering aid, such as sector-wide approaches (SWAPs), as agreed by signatories to the Paris Declaration on Aid Effectiveness, has the potential to address the weaknesses of standalone project aid. These approaches also try to capture the significant potential benefits of donors working more co-operatively in joint strategies with recipient countries.

However, while SWAPs have had some successes they have not solved all the problems of project aid. In many cases the aid delivered through SWAPs is still targeted at a sub-sectoral level, and is often made up in part by project aid. The ‘projectization’ of aid thus persists as donors fear losing the capability to track the specific impact of their money. Again the problem is that this leads to an emphasis on immediate results rather than the long-term sustainability of institutional and organizational capacity.

The key lesson learnt about education aid effectiveness is that sustainable education outcomes will not be achieved through individual projects, even if those projects are in their own right successful. Instead, aid to education needs to be sector-wide and be seen as a long-term process, whereas capacity development requires more active involvement of governments in recipient countries to manage and co-ordinate such policies. If aid to education is to be more effective going forward then these lessons need to put into practice.

Working Paper | The Effectiveness of Foreign Aid to Education