Firms that survived the economic downturn adopted restrictive human resources management, reducing the workforce and making it more flexible, which in turn made employment more vulnerable.

In 2017, manufacturing sector leadership appears both more satisfied and more inclined to support the training of their workers.

Entrepreneurs reveal significant aversion to risk, which will constrain their ability to invest, both in physical and human capital.

The 2017 Survey of Mozambican Manufacturing Firms builds on data collected in 2012 from surviving firms to trace how changing economic conditions have affected the development of firms over five years. The survey also takes an in-depth look at the human factor that plays a key role in firm performance: workforce and leadership characteristics.

When the previous round of the Survey of Mozambican Manufacturing Firms was implemented in 2012, the Mozambican economy showed positive signs of stable and consistent growth. Five years later, the country is facing economic difficulties. With the ongoing credit crisis and very thin external currency reserves, Mozambique has seen its currency devalue significantly and firms saw the market narrowing. Those still operating in 2017 have depended on their leadership and their management choices regarding human resources to survive. 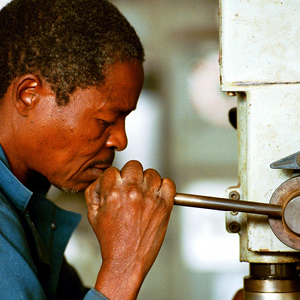 The 2017 survey findings provide important insights about leadership characteristics of manufacturing firms, how owners and managers regard their labour force, and their reactions to the challenging economic environment.

While more educated than average, firm leadership is highly averse to risk

Based on the 2017 survey findings, the Mozambican landscape of firm leadership, overall, has seen changes.

Survey findings also show a general level of satisfaction among firm owners with the labour force, despite movement towards more flexible contracting. 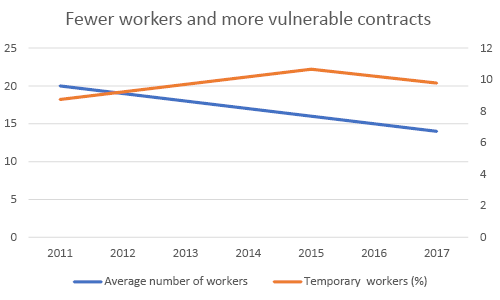 Firms that survived the economic downturn were able to adjust, mostly through restrictive human resources management that reduced the workforce and made it both more flexible but also more vulnerable. Informed management choices were taken by the leadership of the manufacturing firm. These choices also highlight new challenges for the government. While flexibility is needed, the government is advised to pay close attention to the new socioeconomic risks Mozambican workers face in the new environment. Legal boundaries must be maintained, and special attention needs to be paid to the informal sector.

There are significant positive signs. The manufacturing sector’s leadership appears to be both more satisfied and more inclined to support the training of their workers in 2017 than was the case in 2012. Continuous on-the-job training and build-up of technical and organizational capacities of workers is an area where government and manufacturing firms share common objectives and where government should continue to direct investment.

The Mozambique government should be aware of new risks faced by Mozambican workers in light of the adoption of more flexible and vulnerable forms of contracting by firm leadership. Legal boundaries must be maintained.

The government should continue to direct its investment to vocational training and build-up of technical and organizational capacities of workers.

The Mozambican state must assure that policies and regulations are effectively and transparently enacted by public officials, fostering a strong and predictable relationship between firms and public authorities.

However, entrepreneurs reveal significant aversion to risk which will counter their willingness to invest — both in physical and human capital. The government has a particularly relevant role here. Pursuing the government’s stated aims and parliament resolutions, the Mozambican state should assure that policies and regulations are effectively and transparently enacted by public officials, fostering a strong and predictable relationship between firms and public authorities.