The aim of this paper is to identify the scope and patterns of the structural transformation as evidenced by changes in occupations and their task content, and their impact on employment, earnings and income distribution in Argentina during the new millennium. Results show that the changes in... 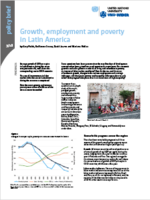 Some questions have been present since the very first days of development economics but have gained increased attention in recent years: Has economic growth resulted in gains in standards of living and reductions in poverty via improved labor market conditions? How do the rate and character of... Argentina experienced a decline in the early years of the 2000s, from 2000 to 2002, in GDP and in most labour market indicators, followed by improvements in nearly all of them, tracing out a U-shaped pattern. The international crisis of 2008 impacted negatively only on the unemployment rate and...

Understanding chronic poverty and its evolution is complex given the amount of information involved. This paper proposes a new approach to analysing the evolution of chronic poverty in a multivariate setting using a Shapley decomposition of a multidimensional chronic poverty measure proposed by...

From the book: The Role of Elites in Economic Development

We study the effects of titles on parcel valuation and urban land market development (real estate transfers, rentals, and mortgages), and the dynamics of deregularization by exploiting a natural experiment in the allocation of land titles to very poor families in a suburban area of Buenos Aires,...

Tony Addison A visit to Buenos Aires in September provided a good vantage point to look at the euro zone’s deepening crisis. Angle readers will recall that Argentina went through a painful adjustment process some ten years ago. This culminated in the peso being forced off its peg to the...

This study examines the programme Redes Solidarias, a public-private initiative that connected to natural pipelined gas 4,000 households in the Great Buenos Aires Area during 2005. The main features of the institutional framework are described and the main results of an impact estimation analysis...

Download PDF Copy Citation
Working Paper pdf
Growth and Recovery in a Time of Default
– Lessons from the Role of the Urban Sector in Argentina
Michael Cohen - UNU-WIDER, 2011 - Helsinki, Finland

An elite derives its status from its relationship to property, whether physical or human capital. While stable property rights are necessary for everyday business, unstable property rights that result in major institutional changes (such as land reform) may have a positive impact on economic...

For many in Latin America, the increasing participation of China and India in international markets is seen as a looming shadow of two ‘mighty giants’ on the region’s manufacturing sector. Are they really mighty giants when it comes to their impact on manufacturing employment?...