Under the current international economic conditions, where Asian countries are strong competitors in the manufacturing commodities, low-income countries like Mozambique could attempt to compete in industries without smokestacks. Fruits and vegetables, agro-processing goods, and various tradable...

The South African services sector is large and growing. This coupled with declining employment shares in manufacturing and mining (i.e. deindustrialization) suggests that South Africa is a de facto service-orientated economy. Employment patterns in services reveal a segmentation that is...

In East Africa, there have been numerous concerns over logistics efficiency. Among them, the regional integration of the trucking industry is perceived as a major problem. This paper utilizes a combination of unpublished data surveys and published data (mainly port data) to assess the extent...

This paper first summarizes the macroeconomic and trade performance of Senegal, emphasizing the limits of traditional exports. It then focuses on three export sectors which have had some success in the past and have good potential for future growth: tourism, horticulture and information...

Special Economic Zones (SEZs) have been successfully used as an industrial policy tool in many countries. Efforts to create SEZs in Tanzania began in 2002, and were stepped up through the establishment of the Export Processing Zone Authority (EPZA) in 2006. A number of state-run zones are now in...

Understanding industry agglomeration and its driving forces is critical for the formulation of industrial policy in developing countries. Crucial to this process is the definition and measurement of agglomeration. We construct a new coagglomeration index based purely on the location of firms. We... 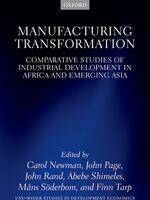 This is an open access title available under the terms of a CC BY-NC-SA 3.0 IGO licence. It is free to read at Oxford Scholarship Online and offered as a free PDF download from OUP and selected open access locations. While it is possible for economies to grow based on abundant land...

This paper examines the possible implications for the financial systems of low-income African economies and in particular Tanzania of their stated aspiration to achieve middle-income status. In doing so it finds little evidence that the mere increase of gross domestic product per capita will lead...

This paper compares and contrasts the economic situation in Tanzania during the resurgence of gold and diamond production after 1999, with the situation that is now emerging as the country begins to exploit very large resources of natural gas mainly from the Indian Ocean. The mining boom after...

Tanzania ranks among the leading stars of the ‘African growth miracle’, but a sector that has been largely absent from the Tanzania success story is industry. Although growth of manufacturing has outpaced economic growth over the past decade, relative to international norms and its... 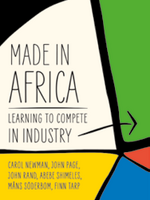 Over the past forty years, industry and business interests have moved increasingly from the developed to the developing world, yet Africa’s share of global manufacturing has fallen from about 3 percent in 1970 to less than 2 percent in 2014. Industry is important to low-income countries. It...

Industrial policies have played an important role in successful development. Through these policies, governments intervene in the market’s sectoral allocation of resources and choice of technologies. Earlier industrial policies had a narrow remit and made use of a limited number of...

Despite the use of industrial policies to stimulate economic growth by several successful developers, latecomers have faced mixed experiences. Hence, this paper analyses the industrial policy experience of the electronics industry in Malaysia. A blend of institutions have guided technological...

This paper suggests that an optimal local content policy in the context of flawed institutions is a more minimal one than those typically pursued by developing countries with recently discovered petroleum reserves. We argue that local content requirements need to be seen as a public expenditure...

South Korea has gained economic development despite the obstacles it faced as a war-torn country with little natural resources and capital. Poverty, lack of democracy, as well as war and conflict were challenges the country faced in the early 1960s; issues not very different from what many...