The City of Helsinki and UNU-WIDER have teamed up to create a joint discussion forum event series. The first event on SDG8 is held 31 May 2022. Join us at Helsinki City Hall, or watch the event online!

Hundreds of countries and cities the world over have committed to achieving the UN’s Sustainable Development Goals by the year 2030, but have they made any progress?

The City of Helsinki and UNU-WIDER are teaming up to host an inspirational series of discussion forums that will highlight some of the goals and work that is being done to make these goals a reality.

In this first event in our series, Harvard Kennedy School Professor Martha Chen will shine a light on the role of informal work in our transforming economy. A panel featuring Dr. Chen, the Mayor of Helsinki Juhana Vartiainen, Emeritus Professor Jo Beall and Community Coordinator Mohamed Ghonam discuss what is being done to secure sustainable economic growth and decent work for everyone. 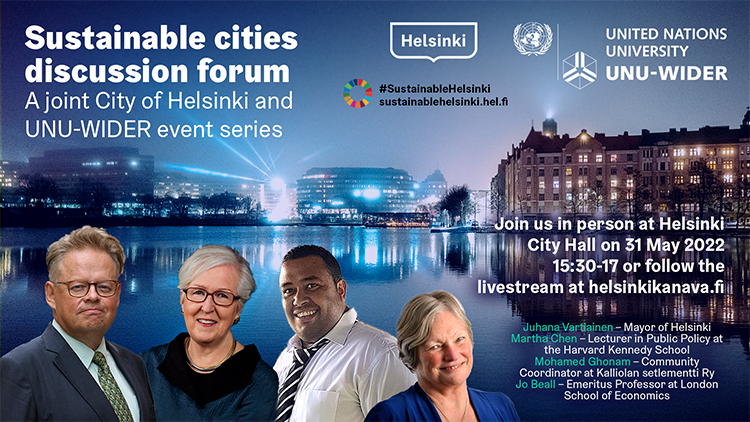 The event will be simulcast and available for later viewing on the city’s video streaming platform, Helsinki-kanava. The series is open to everyone who is interested in sustainability. Please note that seating in the City Hall Lobby is limited.

Martha (Marty) Chen is a Lecturer in Public Policy at the Harvard Kennedy School, the Chair of board of UNU-WIDER, and Co-Founder, Emeritus International Coordinator and Senior Advisor of the global network Women in Informal Employment: Globalizing and Organizing (www.wiego.org). An experienced development practitioner and scholar, her areas of specialization are employment, gender and poverty with a focus on the working poor in the informal economy.

Dr. Chen co-founded and, for twenty years, led the WIEGO network which is well known worldwide for its work to improve the status of the working poor in the informal economy. Dr. Chen received a PhD in South Asia Regional Studies from the University of Pennsylvania.  She was awarded a high civilian award, the Padma Shri, by the Government of India in April 2011; and a Friends of Bangladesh Liberation War award by the Government of Bangladesh in December 2012.

Jo Beall is Emeritus Professor and Distinguished Policy Fellow at LSE Cities, London School of Economics and Political Science (LSE). Formerly Director of Education and Society and on the Executive Board of the British Council, before that she was Deputy Vice Chancellor of the University of Cape Town (UCT) and a Professor of International Development at the LSE. She is a specialist in urban development and urban governance, and cities in conflict affected and fragile states. Her current work is on urban services in cities in Africa and South Asia. Professor Beall is on the Board of the School of Oriental and African Studies, a Fellow of the Academy of Social Sciences and has an Honorary Doctorate from the Open University.

Mohamed Ghonam works as the Community Coordinator at the NGO Kalliolan Setlementti Ry in Matinkylä, Espoo, Finland. He holds a BA from the Higher Institute of Social Work, Alexandria, Egypt. Previously he has worked as a social adviser for the city of Espoo, and as social worker in youth centers and high schools in Egypt. He has personal experience on the challenges and victories of informal work from his home country Egypt.

Denise Wall will be the moderator of the discussion, she is a former journalist who has spent nearly 25 years working in print, radio, television and online news and podcasts. She has reported on a range of social issues at media organisations such as Yle, the Finnish Broadcasting Company, the Paris-based AFP and DowJones Newswires/The Wall Street Journal. Denise has also held senior roles in corporate and marketing communications with Finnish firms operating globally. She currently leads content marketing agency Spoon Finland, where a diverse and talented team of former journalists helps clients tell real stories about real people.