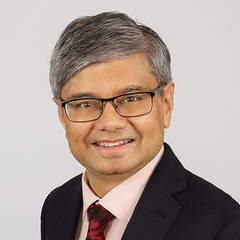 Professor Kunal Sen has over three decades of experience in academic and applied development economics research. He is the author of eight books and the editor of five volumes on the economics and political economy of development. Since 2019 he has served as Director of UNU-WIDER while on leave from the Global Development Institute, University of Manchester, where he is a professor of development economics.

Professor Sen is a leading international expert on the political economy of growth and development. He has performed extensive research on international finance, the political economy determinants of inclusive growth, the dynamics of poverty, social exclusion, female labour force participation, and the informal sector in developing economies. His research has focused on India, East Asia, and sub-Saharan Africa.

Professor Sen’s books include The Political Economy of India’s Growth Episodes (2016), The Process of Financial Liberalization in India (1997), and the Economic Restructuring in East Asia and India: Perspectives on Policy Reform (1995). His is a co-editor of Deals and Development: The Political Dynamics of Growth Episodes (2018) and The Politics of Inclusive Development (2016). And has also written twenty-five chapters in other volumes and published more than ninety peer-reviewed journal articles on topics in his field.

He has been awarded the Sanjaya Lall Prize in 2006 and Dudley Seers Prize in 2003 for his publications.

In recent decades, India has experienced rapid economic growth alongside radical affirmative action programs enacted since independence. This column explores what we know about the impact on social mobility...

(19 March 1952 – 24 December 2022) It is with the greatest sadness and a deep sense of grief and shock that we received the news of the passing of Professor Martin Ravallion at the age of 70...

Cross-country patterns in structural transformation and inequality in developing countries

Introduction: the changing nature of work and inequality

BOOK IN PRODUCTION, SCHEDULED FOR PUBLICATION IN 2023 | Using a range of countries from the Global South, this book examines heterogeneity within informal work by applying a common conceptual framework and empirical methodology...

Tasks, skills, and institutions: The changing nature of work and inequality

BOOK IN PRODUCTION – ESTIMATED FOR PUBLICATION IN SUMMER 2023 Developed countries have experienced a polarization in earnings and in employment, namely stronger growth in the earnings and jobs for the most and least skilled workers at the expen...

On Friday, 2 December 2022, Kunal Sen presents to an audience of researchers at the University of Sussex including visitors from the Institute for Development Studies. The presentation draws from the forthcoming book The job ladder: Transforming...

Not too long and not too short: Introducing the new UNU-WIDER and Cambridge University Press series in Development Economics
by Andy Sumner, Kunal Sen
December 2022

Simon Kuznets’ pipe dream was to have economic inequality data that rarely existed when he was writing. What are the pipe dreams of today’s development economists?...

Doing business in a deals world: The doubly false premise of rules reform

The Doing Business reports have evoked an intense policy debate about whether countries should simplify regulatory rules or make them more stringent...

Does the gender of the owner affect the productivity of enterprises in India’s informal economy?

We examine the patterns and correlates of the productivity gap between male- and female-owned enterprises in India’s informal sector...

On 3 November 2022, Kunal Sen attends the prestigious Oxford Union debate on the motion ‘This House Blames Western Lenders for the Plight of Developing Countries’. According to the World Bank, the pandemic pushed the foreign debt of low-...