Blog
In Conversation with Deepak Nayyar on ‘Resurgent Asia’

You start with an economist called Gunnar Myrdal, who 50 years ago wrote a book saying that Asia was doomed!

Myrdal had a European perspective of Asia, with almost no history. For him, Asia began really at the end of the Second World War. But how Asia came to be what it was had much to do with the history of colonialism, which Myrdal largely ignored.

But he did get two things right: first he said you cannot study economies in isolation from social, political and historical factors, although he was rather short on history. And two, that institutions matter – in that sense, he was before his time.

Yet he was deeply pessimistic about Asia’s prospects, for reasons that have always characterized Western thinking about Asia – whether it was Karl Marx or Max Weber, they have similar views about the Asiatic mode of production, the absence of Protestant rationality and the work ethic.

Myrdal made two big mistakes about the future of Asia. He believed the dominant thinking of the time that economic openness did not offer any path to development, and that the governments of Asia were not capable of doing what was needed. The opposite turned out to be true.

The colonial era witnessed a precipitous decline in this economic significance. By 1962 Asia’s share of world population had diminished to 50% and in world income it had plummeted to 15%. For China and India, it was down to 35% of population and only 8% of world income.

This ‘Great Divergence’, which Myrdal did not mention or recognize, was associated with what I call the ‘Great Specialization’, which meant that Western Europe produced manufactured goods, while Asia produced primary commodities. The share of China and India in world manufactures production collapsed from almost 50% in 1830 to 5% in 1962.

The decline and fall of Asia was attributable to its integration into the world economy through trade and investment, shaped by colonialism and driven by imperialism. The industrialization of Western Europe and the de-industrialization of Asia were two sides of the same coin.

The transformation of Asia over the last 50 years has been phenomenal. In 1970 it was the poorest continent in the world, poorer than Africa. By 2016 its share of world GDP had risen from less than 10% to more than 30%, while its income per capital was converging towards the world average.

Rising per capita incomes were associated with a transformation in the social indicators of development, as infant mortality rates fell, and life expectancy and literacy rates rose everywhere.


The transformation of Asia over the last 50 years has been phenomenal. In 1970 it was the poorest continent in the world, poorer than Africa.

Poverty rates fell, but the scale of absolute poverty that persists is just as striking as the reduction. Poverty reduction could have been much greater, but for rising inequality.

What’s the secret – how did Asia do this?

People on opposite sides of the ideological divide often cite the Asian experience to validate their views. There are two issues that are at the heart of the debate about Asia. That is about the nature of economic openness and the role of the state. These two big issues made a difference in Asia.

Resurgent AsiaEconomic openness has performed a critical supportive role in Asian development, wherever it has been a strategic integration, rather than a passive insertion into the world economy. In the Asian 14 (major Asian economies), openness, while necessary, was not sufficient. It was only conducive to industrialization when combined with industrial policy. 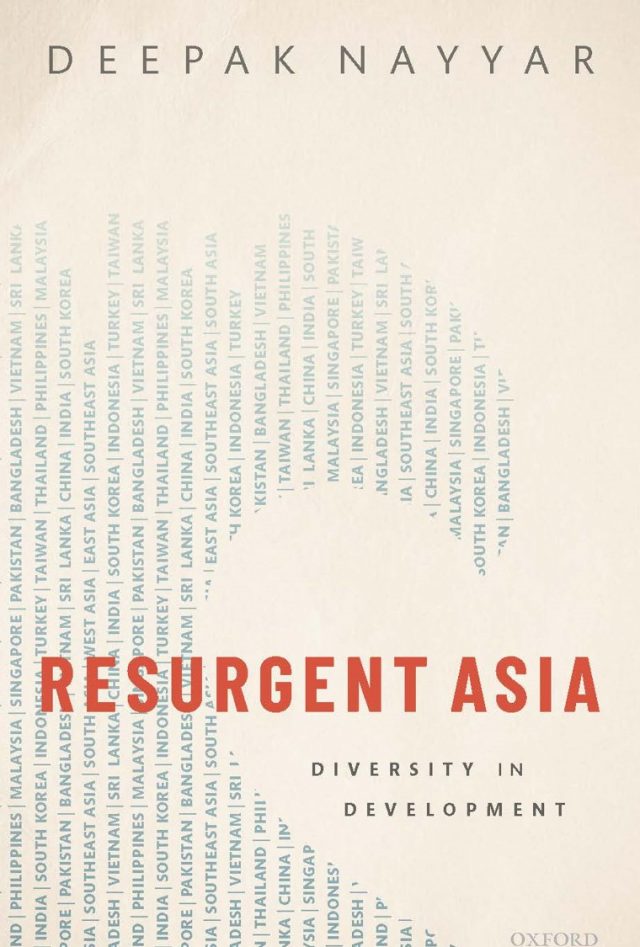 Some examples: trade policy was asymmetric – open for the export sector, restricted for others. Exchange rates were overvalued for long periods to support exports. Regimes for foreign investment and technology were calibrated to support industrialization. The allocation of private investment to selected sectors was often guided by differential interest rates (South Korea, Japan), or tax concessions (Taiwan and later, India). Industrial finance was provided through development banks. Most important there was a coordination across sectors over time. It was sensible industrial policy implemented by effective governments that made the difference.

Governments performed a critical role, from leader to catalyst and supporter, over half a century. Their ability and willingness to do so depended on the nature of the state, which in turn was shaped by politics.

Unlike Latin America and Africa, most countries in Asia had a long history of well-structured states and cultures that were not entirely destroyed by colonialism. That meant that political independence, which restored their economic autonomy and enabled them to pursue national development objectives, was an important underlying factor in their quest for catch up.

Unlike the ideologues, I believe that the state and the market are both institutions evolved by humankind to organize society. They are complements, not substitutes. The two institutions must adapt to each other in a cooperative manner over time. Success in Asian development was about managing this evolving relationship and by finding the right balance in their respective roles, which also changed over time.

The lesson for the rest of the world is that governments can be made development-oriented and people friendly if they are accountable to citizens.Even so, other states in the Asian 14, where states were less effective, did manage to introduce economic policies and evolve institutional arrangements that were conducive to industrialization and development. In these countries, it is only institutionalised checks and balances that can make governments more development-oriented, and people-friendly. This is obviously more feasible in political democracies than in authoritarian regimes. For Asia’s continuing journey in development during the next 25 years, democracy is better than the alternatives. For all its flaws, warts and manipulation, it provides the self-correcting systems for when things go wrong.

The Future for Africa

I am not a pessimist about Africa. It is possible for Africa to do in the next 50 years what Asia did in the past 50 years. It is land abundant, natural resource abundant and has enormous potential. But the potential can be harnessed if and only if there is a political transformation in the nature of the states. Where they are development oriented and people-friendly, you see change. But where they are about capturing and retaining power, things are not working out well. It has to begin with a political transformation, because the role of the government is critical. Then different countries will find different ways of coming to political settlements between governments, elites and citizens.


It is possible for Africa to do in the next 50 years what Asia did in the past 50 years.

The Rise of Populism

If we think of the future of Asia there are significant political challenges embedded in a profoundly changed global political economy. In the past 25 years, when Asia performed its miracle, the world was both Asia-friendly and development-friendly: a rapid expansion in international trade, an expansion of capital flows, relatively open markets. Now there is a political backlash of resurgent nationalisms, which exploits fears about openness in trade, and in immigration as a threat to jobs. The irony is these resurgent nationalisms, populist, xenophobic and on the right, which I describe as toxic, are in the industrialised countries at least in part attributable to the rise of Asia. But these resurgent nationalisms are not limited to industrialized countries – they exist also in developing countries, where you have nationalist, populist, xenophobic leaders who exploit ethnic divides, religious divides, rampant corruption to capture political power.

There can be no question that if Asia continues to grow at the rates of the past 25 years, or even somewhat slower, it is going to contribute to environmental degradation. Sadly, there’s not much we can learn from history – over the past 2 centuries, industrialization and growth have all been driven by fossil fuels.

Now while I worry about the environmental consequences of economic growth, I also recognize what Bertolt Brecht said ‘those who eat their fill speak to the hungry of the wonderful times to come’. It’s very hard to persuade people to lower their living standards.

To me there is one silver lining – a growing consciousness among people in Asian countries about the environmental consequences of rapid economic growth. All these public bads come to be regulated if and only if their consequences exceed the limits of tolerance of the people, and that threshold is being reached now in a number of large Asian countries. There will be no international agreement with obligations – that is as clear as daylight. These countries will have to do it themselves. We are seeing the rise of solar energy in China and now in India, and cleaner technologies from local R&D. So I worry, as any good citizen of the world should, but I’m not a pessimist – maybe we will find solutions.

This article is republished from From Poverty to Power under a Creative Commons license. Read the original article.

A snapshot of poverty and inequality in Asia

Global poverty: coronavirus could drive it up for the first time since the 1990s
Next