Across sub-Saharan African (SSA) countries there are striking differences in citizen willingness to pay taxes. For example, in Mali, Senegal, and Ghana, around half of those surveyed ‘strongly agreed’ that the government has the right to make people pay taxes, but in Cote d'Ivoire this figure is only 16%. What explains this variation is the central question of our recent research, conducted within UNU-WIDER’s project Fiscal states – the origins and developmental implications.

We argue that the nature of a country’s property rights regime is a crucial —but so far overlooked— factor that may explain this variation in tax compliance.

Why would people pay taxes to the state when it is the property rights assigning authority? First, this brings the entity that demands taxes and those who are subject to those tax demands into a direct relationship —something that scholars of the fiscal contract emphasise is an important determinant of tax compliance (see Ali et al 2014 or Nistotskaya and D’Arcy 2018).

Second, once a person’s individual property rights are state assigned, that person also depends on the state to sustain these rights and consequently has incentives to support the authority which underpins those rights.

We test this argument in the empirical context of sub-Saharan Africa and focus on property rights on land, as land is fundamental to the livelihoods of most people and their very ‘being and identity’.

Which authorities assign property rights on land in SSA?

Property rights regimes on land in African states are extremely complex and diverse, but can be understood in terms of a conceptual distinction between statist and neo-customary regimes (p. 172).

Neo-customary regimes are ones ‘in which state-backed local leaders who are officially recognised as neo-customary or traditional exercise state-sanctioned authority within communities recognised as autochthonous or indigenous by the state, including authority over land allocations and land-dispute adjudication’ (ibid.).  Statist regimes are ones where ‘the central state itself is the land allocator and dispute adjudicator’.

The defining characteristic and point of distinction between neo-customary and state-assigned property rights is that the former are ‘usually earned through “sons of the soil” entitlements’ (p. 898). This means that while neo-customary rights can be either individual, familial, or communal, and are recognized by the state (such as in Burkina Faso, Ghana, Kenya, Malawi, Tanzania, or Uganda) or not (as in Burundi, Mauritius, or Rwanda), they are held by virtue of membership in a community that claims indigeneity to that place and are assigned by traditional authority.

This contrasts with state-assigned property rights: any individuals from anywhere can hold them through a relationship with the state, rather than through relations with local political actors and within group/family/kinship networks.

In forty-five SSA countries, the average share of land governed by traditional authorities is 59% of the total land, but it varies between countries from 97.7% in Somalia to 2.2% in Rwanda.

The link between a property rights regime and tax outcomes

We test the link between the type of property rights regime and tax outcomes in two ways.

First, we use data on individuals from 32 sub-Saharan African countries to evaluate the association between the ease of access to government information on land ownership and citizens’ willingness to pay taxes.

We found that the easier it is to find information on land ownership from a government office the more likely it is for people to agree that authorities have a right to collect tax. This effect is stronger than those related to satisfaction with services, trust in political institutions, and impartiality of the government. Only education has a stronger effect on tax compliance.

Second, in a cross-country analysis on the association between the extent of the statist regime and tax revenues collected, statist regimes collect more revenue.

Figure 1. Property rights regime and revenue from taxes on individuals in SSA 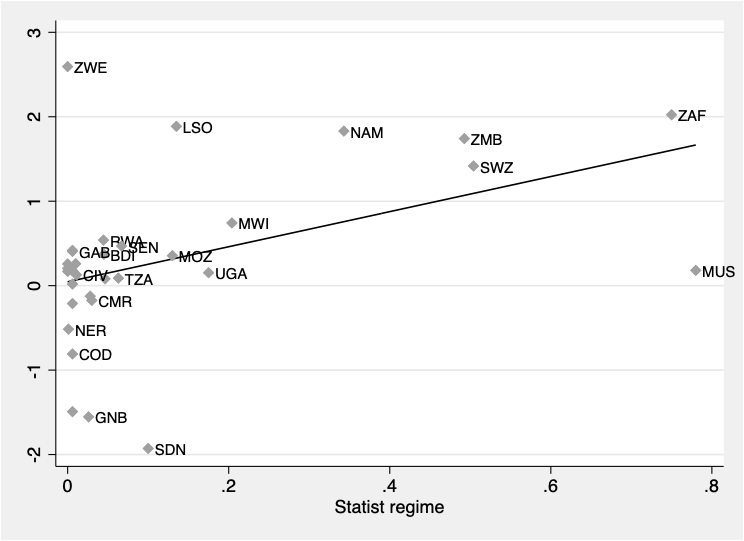 The formalization of property rights has been on the development agenda for many years (see de Soto 2000), but achieved limited success in terms of increased private investment and reduced poverty. Our findings suggests that state-led formalization of property rights may have positive fiscal consequences, and governments that continue to pursue it may build a stronger fiscal contract with their citizens that can increase revenues needed for broader development.

Marina Nistotskaya is an associate professor at the department of political science and Director of the Quality of Government Institute at University of Gothenburg, Sweden.

Michelle D’Arcy is an Associate Professor in the Department of Political Science, Trinity College Dublin. Marina Nistotskaya is an associate professor at the department of political science and Director of the Quality of Government Institute at University of Gothenburg, Sweden.

Michelle D’Arcy is an Associate Professor in the Department of Political Science, Trinity College Dublin.

Blog | Tax revenues and tax capacity in sub-Saharan Africa
Blog | Fiscal states in developing economies: Why do they matter and where do they come from?
Blog | Are autocratic states doomed to weak fiscal capacity?
Blog | Do resource rich economies have better or worse human development outcomes?
Blog | Electoral politics and Mexico’s COVID-19 vaccine roll-out

No taxation without property rights

Are autocratic states doomed to weak fiscal capacity?
Next