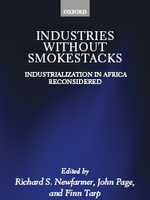 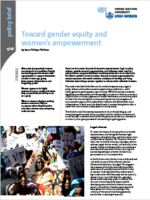 There are three main channels of women’s empowerment: legal or policy reforms, outside economic opportunities, and collective action. Legal (or policy) reforms are generally based on statutory laws that enact rules to be followed or prohibit certain practices. External economic... 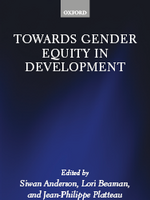 This is an open access title available under the terms of a CC BY-NC-SA 3.0 IGO licence. It is free to read at Oxford Scholarship Online and offered as a free PDF download from OUP and selected open access locations. As a result of widespread mistreatment and overt...

In this paper, we explore the links between polygyny and female labour supply in Senegal using a nationally representative survey. In a reduced-form approach, we first measure the impact of polygyny on participation using a joint model of spouse participation. The identification of the impact...

This paper first summarizes the macroeconomic and trade performance of Senegal, emphasizing the limits of traditional exports. It then focuses on three export sectors which have had some success in the past and have good potential for future growth: tourism, horticulture and information...

At our 30th Anniversary Conference we took the chance to interview Martin Ravallion of Georgetown University—we asked him to discuss his recent work on extreme poverty, and to highlight what he believes the major challenges in this area will be over the next thirty years. This year...

The increasing quantity of literature investigating the impact of trade openness on firm efficiency has not yet provided a definite prediction of the direction of causality. This paper investigates how the relationship between exporting and productivity impacts on manufacturing sectors in Senegal...

Productivity gains are the prime engine of economic growth. This paper uses a rich amount of firms’ accounting information from the Single Information Collecting Centre in Senegal over the period 1998-2011. To investigate the two main obstacles to growth, poor education and poor access to...

Senegal is a typical sub-Saharan economy, which conducted an import substitution policy over 1960-86, followed by a policy of support for the private sector and liberalization of the economy. It suffers from a low level of economic development, hindering the process of economic diversification, and...

In this study, we assess the inclusiveness of growth by tracking the yearly percentage change in the household consumption of individuals over different growth spells in Cameroon, Senegal, and Tanzania. With cross-sectional data, we track the consumption of groups of individuals that share similar...