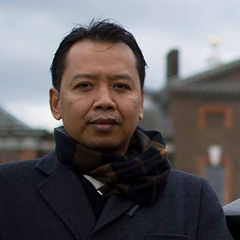 His research focuses on the economic development, particularly on poverty and inequality as well as on the interlinkage between economy and the environment. He is also well-known for his expertise in economic modeling particularly computable general equilibrium (CGE) modeling.

He is Founding Director of the Center for Sustainable Development Goals Studies (SDGs Center) of Padjajaran University. He is also Director of the Economy and Environment Institute Indonesia (EEI-Indonesia), a part of the wider network of Economy and Environment Program of Southeast Asia (EEPSEA), an organization that works on the research capacity-building for environmental economics in the region. He has been consultant to various organization such as ADB, UNESCAP, OECD, the World Bank, IDRC as well as advisor to various Indonesian government agencies. Prof. Yusuf is on the editorial board of Bulletin of Indonesian Economic Studies (BIES), a member of the Indonesian Young Academy of Science (ALMI) and the current President of Indonesian Regional Science Association (IRSA).

Today, we see clear trends in developing countries of a potentially troubling ‘new normal’ for economic development. We see tertiarization with rising inequality. We see urbanization without growth...

The developer’s dilemma: A survey of structural transformation and inequality dynamics

This paper discusses the ‘developer’s dilemma’—a tension emerging from the fact that developing countries are simultaneously seeking structural transformation and broad-based growth to raise incomes of the poor...

We focus on special characteristics of the manufacturing sector, in terms of employment generation and productivity growth, that enable the rapid, resilient economic catch-up of developing countries...

The changing nature of work and inequality