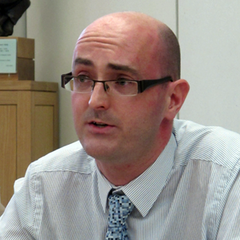 Andy Sumner is a Professor of International Development at King’s College London. He is also Director of the Economic and Social Research Council (ESRC) Global Challenges Strategic Research Network on Global Poverty and Inequality Dynamics.

His research focuses on economic development and distribution dynamics, in middle-income developing countries and Southeast Asia in particular. Andy has twenty years’ international research experience using both qualitative and quantitative methods and has published extensively, including twelve books and some fifty journal papers and book chapters.

He is a Non-Resident Senior Fellow of UNU-WIDER and he also holds associate positions at the University of Oxford, the Center for Global Development, Washington DC, and at Padjadjaran University, Indonesia.

Today, we see clear trends in developing countries of a potentially troubling ‘new normal’ for economic development. We see tertiarization with rising inequality. We see urbanization without growth...

Global poverty: coronavirus could drive it up for the first time since the 1990s
by Andy Sumner, Chris Hoy, Eduardo Ortiz-Juarez
June 2020

As COVID-19 slows in developed countries, the virus’s spread is speeding up in the developing world . Three-quarters of new cases detected each day are now in developing countries ...

The end of poverty postponed?: Over a billion people living in poverty and a $500 million per day loss of income for the poorest people in the world could soon be reality
by Andy Sumner, Chris Hoy, Eduardo Ortiz-Juarez
June 2020

The COVID-19 pandemic continues to dominate headlines as the death toll rises and economies falter...

Precarity and the pandemic: COVID-19 and poverty incidence, intensity, and severity in developing countries

This paper makes a set of estimates for the potential impact of the COVID-19 pandemic on poverty incidence, intensity, and severity in developing countries and on the distribution of global poverty...

In a recent paper for UNU-WIDER, economists estimated that close to half a billion people could fall into poverty as a consequence of the COVID-19 pandemic. This would set back progress on ending poverty by at least a decade. In some countries,...

Will COVID-19 lead to half a billion more people living in poverty in developing countries?
by Andy Sumner, Chris Hoy, Eduardo Ortiz-Juarez
April 2020

The impacts of COVID-19 in developing countries are starting to be felt. The Economist went as far as to call it the ‘next calamity’ , noting how overlooked the impact on poorer countries has been...

In this paper we make estimates of the potential short-term economic impact of COVID-19 on global monetary poverty through contractions in per capita household income or consumption...

The developer’s dilemma: A survey of structural transformation and inequality dynamics

This paper discusses the ‘developer’s dilemma’—a tension emerging from the fact that developing countries are simultaneously seeking structural transformation and broad-based growth to raise incomes of the poor...

We focus on special characteristics of the manufacturing sector, in terms of employment generation and productivity growth, that enable the rapid, resilient economic catch-up of developing countries...

Most Organization for Economic Co-operation and Development countries have accepted, in principle at least, the 50-year-old commitment of contributing 0.7 per cent of gross national income to supporting the development of countries in the Global Sout...

Discussions on the developing world’s industrial policies have largely neglected the role of state-owned entities...

The storyline The basic storyline of this blog is economic growth since the Cold War. It is outlined how growth has produced two new middles...

The world’s two new middles: Growth, precarity, structural change, and the limitations of the special case

This paper discusses the emergence of two new middles since the Cold War, namely middle-income countries and people living above absolute poverty but below a security-from poverty-line. The paper sets out what has happened...

24 September 2013 Andy Sumner A series of papers since late 2010 has discussed a shift in the location or 'geography' of global poverty...