Technological catch-up is bringing new asynchronies to development pathways. What does this mean for employment, globalization, and inequality? A chapter in the volume The Developer’s Dilemma, which traces trends of structural transformation, offers a framework for understanding the emerging global techno-economic constellation.

Digital technologies are conquering the developing world. From app-based e-commerce to self-checkout and smart-card technology, cutting-edge technology is no longer confined to high-income countries. The mobile phone-based financial service M-Pesa, originating from Kenya and Tanzania, may be the most famous example of a phenomenon known as technological ‘leap-frogging’. M-Pesa is part of a bigger trend in developing economies. What future does this trend spell for structural change?

Skipping rungs on the ladder

In the 1950s, the Russian-American economic historian, Alexander Gerschenkron, posited that a country’s lack of industrialization could be an advantage. By importing modern technologies from leading industrialized countries, and by investing in cutting-edge machinery and equipment, ‘latecomers’ to the structural change process could skip stages of modernization. Similar arguments in favour of technological borrowing were also advanced by the American social theorist Thorstein Veblen.

... navigating technological mismatch and striking a balance between technological feasibility and local needs is becoming a key development challenge ...

Orthodox modernization theory pictures the development process as a ladder on which countries advance one step at a time. Perhaps the pace of climbing can be accelerated, but successful paths towards economic maturity, it posits, always include certain critical steps. Gerschenkron, who studied the history of newly industrialized countries in Eastern Europe and Russia, disagreed with this model. In his view, skipping steps would enable late-developing economies to generate faster and more capital-intensive industrial growth, unhindered by societal constraints and orchestrated by a strong, interventionist state.

Seventy years later, the idea of skipping rungs is back in fashion. Arguments in the vein of Gerschenkron and Veblen are seeing a revival in a flourishing discourse on ‘leapfrogging’, advocating catch-up via technological borrowing, and ‘digitization for development’. They can be heard both in scholarly research and across the board of international development organizations.

There are, however, critical voices. Technological research and development (R&D) is still carried out predominantly in upper-middle and high-income countries, including the industrial clusters in East Asia, and it often reflects the demands of these places. In a recent paper, Oxford economist Lant Pritchett argues that labour-saving technology economizes on a factor of production that is scarce in high-income contexts but is, in fact, abundant in low-income countries: routine manual labour. Adopting this technology in low-income contexts would be to follow a ‘distorted’ price signal and create a negative externality. Rather than labour-saving technology, Pritchett argues, the Global South needs job creation for low-skilled labour.

Development has always meant change — yet the patterns of change that development theorists have grown accustomed to are themselves changing.

What this and other sceptical accounts of technology adoption have in common is a rejection of the premise that it is always advantageous everywhere to adopt technology developed in and for high-income countries. In fact, navigating technological mismatch and striking a balance between technological feasibility and local needs is becoming a key development challenge in the twenty-first century.

Labour-saving technology is just one domain where a technology leap could turn out to be what I call a ‘technology creep’ — meaning the potentially harmful proliferation of technology into mismatched environments. My chapter in The Developer’s Dilemma argues that tensions between local needs and externalities of borrowed technology could take many forms and manifestations. Scholars have studied issues of technological dependency that lock countries into costly technology — growing energy consumption from technology; trade balance problems; political surveillance and technologically weaponized authoritarianism; and other adverse effects from borrowing certain, mismatched, technologies. In an earlier publication, Andy Sumner and I argued that robotization is an example of a challenge for developing economies as it is driving labour out of the industrial sector into a bloated low-wage service sector — we call this ‘disrupted development’.

My chapter distinguishes a ‘leaping’ trajectory from other modes of techno-economic development (Figure 1) and explores reasons for why countries may be (pushed into) pursuing leaping strategies.

Figure 1: Development pathways with reference to economic and technological maturity 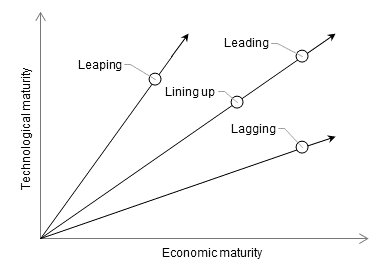 The Future of Structural Change

Development has always meant change — yet the patterns of change that development theorists have grown accustomed to are themselves changing. Previously, ‘early adoption during late development’ may have taken the form of sporadic national prestige projects — think India’s ambitious space programme. Now, the scale and scope of leapfrogging development seems more widespread and perhaps less top-down orchestrated than previously.

My chapter explores the leaping phenomenon alongside other novel constellations which technological change is bringing about including shifts in the employment structure of economies — notably ‘structural convergence’ and sector ‘hybridization’, and new challenges related to international trade, such as automation-driven ‘reshoring’. The chapter is part of a collective effort to understand contemporary and emerging patterns of structural change around the world.

Lukas Schlogl is a social scientist at the Department of Political Science, University of Vienna. His latest book is Disrupted Development (with Andy Sumner, Palgrave 2020). Lukas Schlogl is a social scientist at the Department of Political Science, University of Vienna. His latest book is Disrupted Development (with Andy Sumner, Palgrave 2020).

He is a contributing author to the forthcoming UNU-WIDER book, 'The Developer's Dilemma — Structural Transformation, Inequality Dynamics, and Inclusive Growth'.

Leapfrogging into the unknown

Studying COVID-19 through the lens of microsimulation
Next