In recent years many global firms—including Starbucks, Google, and Amazon—have come under fire for avoiding paying taxes in one country by shifting their profits to a country with lower tax rates. Attention has been largely focused on companies avoiding tax in developed countries, but our new WIDER Working Paper documents a strong relationship between economic development and the prevalence of multinational tax avoidance: countries with low incomes and poor governance are more exposed to tax dodging. This is particularly worrying given the urgent revenue needs and already limited tax bases of developing countries.

Multinational firms reduce their tax bills substantially by shifting profits from countries with high taxes to countries with low taxes. The various profit-shifting techniques are fairly well understood. Transfer mispricing, aggressive financial structures, and the strategic allocation of intangible assets, give multinational firms a large degree of flexibility to decide where their profits should be taxed.

Recent evidence suggests that the resulting loss of government revenue is likely to be counted in hundreds of billions of dollars every year.

While almost all studies of multinational tax avoidance focus on developed countries, a rich dataset with financial information on 210,000 corporations in 102 countries allows us to take a global perspective.

We document that the profits reported by corporations depend systematically on their incentives to shift profits to foreign affiliates. Concretely, if we consider two corporations in the same country with similar inputs of capital and labour, the one whose parent company faces the lower tax rate tends to report the lower profits. This pattern is clearly consistent with tax motivated profit-shifting: the lower the tax rate of the parent, the larger the tax saving from shifting profits by means of transfer pricing or otherwise.

Interestingly, the relation between reported profits and the incentives for profit-shifting varies systematically with the level of economic and institutional development. In countries with low incomes and poor governance, the sensitivity of corporate profits to profit-shifting incentives is much stronger.

Evidence of tax avoidance in the raw data

Figure 1 provides an illustration of aggressive profit-shifting in low- and middle-income countries. For each corporation in the sample, we compute a simple measure of reported profitability: the ratio of profits to total assets. We then show how this profitability measure is distributed in a window around zero. 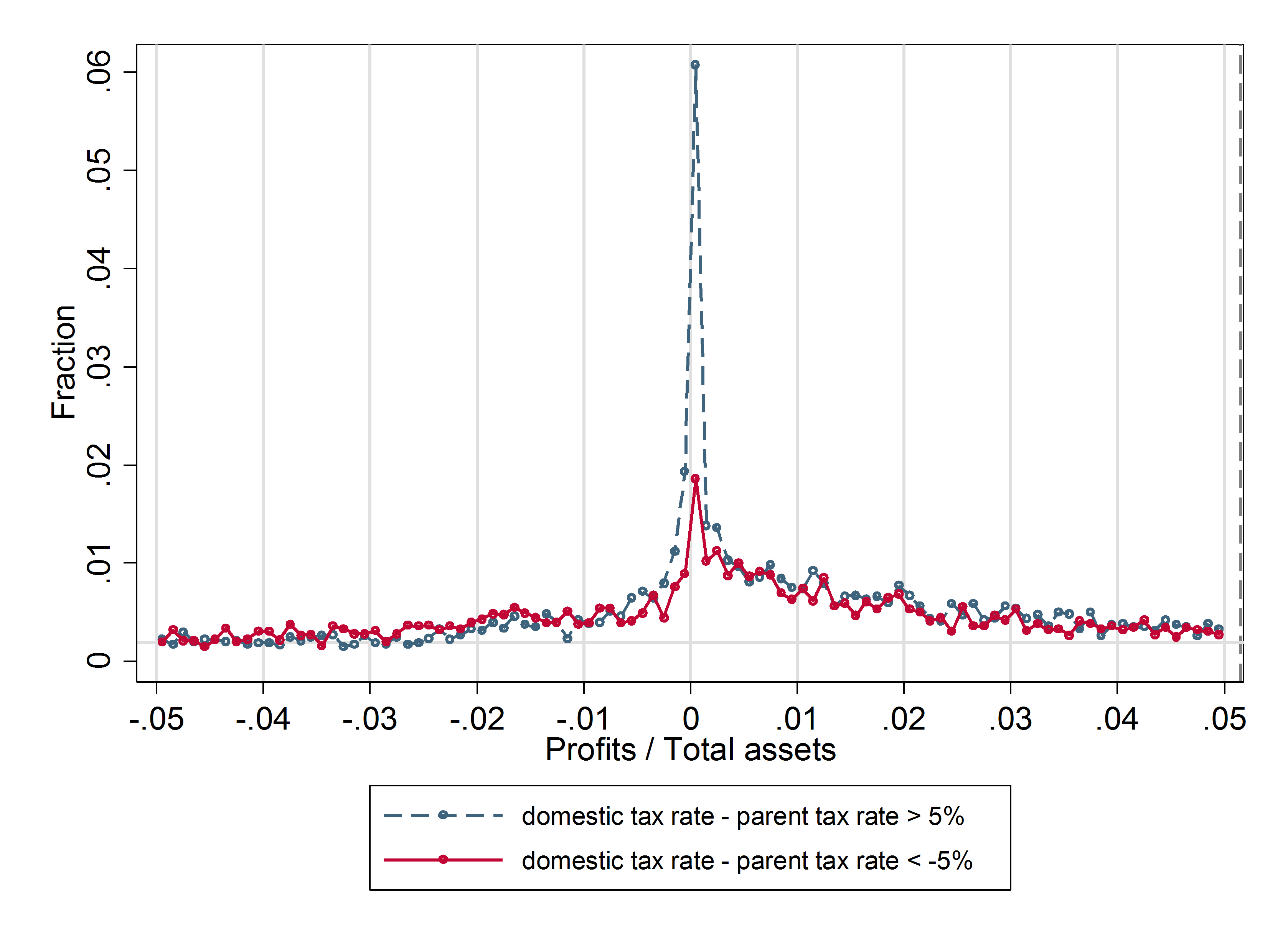 The figure shows striking evidence of bunching at zero profits for corporations whose parent faces a tax rate at least 5% lower than themselves. This is suggestive of aggressive tax avoidance whereby all profits are shifted to foreign affiliates facing lower tax rates.

The analogous figure for high-income countries shows almost no difference between corporations with different tax incentives.

The finding that less developed countries are more exposed to multinational tax avoidance consistently emerges in a wide range of empirical specifications.

Our findings may explain why many developing countries opt for low corporate tax rates in spite of urgent revenue needs and severe constraints on the use of other tax bases. When firms respond strongly to profit-shifting incentives, increases in tax rates generate little or no increases in government revenue.

The inability to contain profit-shifting therefore constitutes an effective constraint on tax policy and low rates may be the best feasible policy given this constraint. This illustrates the broader finding that fiscal capacity tends to be low in developing countries.

Working Paper | Are less developed countries more exposed to multinational tax avoidance?
Working Paper | Lofty pine and clinging vine
Blog | Report from the UNU-WIDER symposium on ‘The Political Economy of Social Protection in Developing Countries’ – Mexico City
Blog | Capital flight from developing countries – what is it, how is it measured, and what have we learned?

Diversity debit vs. diversity dividend
Next