The sculpture below in Mexico City is called ‘El Ángel de la Securidad Social’ (The Angel of Social Security) and was created by Jorge Marín in 2013 to commemorate the 70th anniversary of the founding of the Instituto Mexicano del Seguro Social (IMSS) in 1943. In addition to a system of social security policies established at the same time, Mexico now also has a number of social assistance programmes, including one of the first national conditional cash transfer programmes reaching nearly 6 million households. Currently known as Prospera, its previous guises include Oportunidades and before that Progresa, as each new government rebranded it and made a few adjustments to the design. This demonstrates their attempts to claim the programme’s success, reflecting its political importance.

What kind of programmes count as social protection? 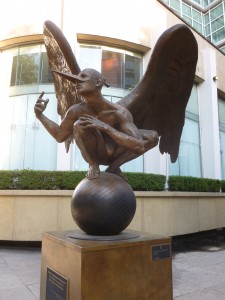 Mexico was therefore an appropriate location for UNU-WIDER’s symposium on ‘The political economy of social protection in developing countries’, which brought together about 50 academics from more than 20 countries. According to @phdcomics a symposium is pretty niche ('like, only a few people in the world even know what it is'), but social protection is actually a broad area covering a range of familiar policies, such as pensions, health insurance and child benefits.

This wide scope led to questions about the criteria used to decide which kinds of programmes should be included in both a data set of ‘redistributive transfers’ used in one of the papers, and also in the Social Assistance, Politics and Institutions (SAPI) data base currently being developed by UNU-WIDER. For example, food security programmes are often disregarded but have formed the basis for social protection schemes, such as Ethiopia’s Productive Safety Net Programme (PSNP).

The politics of social protection in sub-Saharan Africa’

The Effective States and Inclusive Development research centre (ESID), based at the University of Manchester, has a project on ‘The Political Economy of Social Protection Expansion in Africa’. This research aims to explain variation in national experiences of social protection through a comparative study of five countries in sub-Saharan Africa: Ethiopia, Rwanda, Kenya, Uganda and Zambia.

At the symposium the ESID papers were presented in a panel on ‘The politics of social protection in sub-Saharan Africa’, which included each of the country papers plus initial comparative findings and the global perspective across two sessions. ESID’s approach is that social policy is inherently political. Building on the political settlements framework, the project incorporates theories of welfare state development to highlight the role of interests and ideas in shaping social policy. This ESID working paper outlines the theoretical and methodological approach in more detail and you can listen to the latest findings from the project here.

Some of the other papers looked at the effects of specific programmes. While the results presented were interesting, this impact-focused approach did not always engage with the political realities of policy-making. The findings from ESID’s social protection project indicate that technical evidence is not the only, or even a significant, factor in determining whether a social protection programme is adopted and expanded by a government. Out of the five country cases in the project, Zambia, found that evidence played a role in convincing the government to accept social protection.

The case of Zambia

In Zambia, several social cash transfer models were piloted in specific districts. These included a 10% inclusive model (IM) targeting the poorest incapacitated and destitute households; a social pension for all people over 60 and a child grant programme for any households with a child under five years. From 2007 onwards, randomised control trials (RCTs) were conducted in communities receiving cash transfers and also control groups which would receive the transfers three years later, to study the effects of each model. The reports demonstrated strong positive impacts and were used as an evidence-base to successfully persuade politicians about the credibility of the programme. 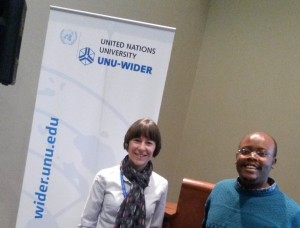 However, the results of the individual reports for each model were used selectively in terms of design decisions. Although the child grant programme (CGP) reports were the most influential politically, as they included economy-wide impacts of cash transfers, the CGP design was rejected due to several objections. For example, as  all households received CGP transfers regardless of income, it was not considered to be a poverty reduction programme, even though the report found that the CGP reduced extreme household poverty by 5.4 percentage points. There were also suspicions that it would encourage higher fertility rates, although a study carried out by UNICEF found no increase in fertility. Despite this information, the 10 percent inclusive model was selected. This targets the poorest, incapacitated households as they are considered by elites and citizens to be ‘deserving’ recipients of cash transfers.

Governments are also not necessarily interested in effectiveness or value for money in terms of long-term outcomes of their policies. As Jeremy Seekings points out, affordability of social protection policies is both a fiscal and political question. Apart from available budget, there are many other factors influencing government decisions on resource allocation, issues of acceptability mentioned above and the political expediency of different policy options. According to ESID’s framework, the distribution of resources, in this case through social policies, is the outcome of competition between contending groups. In this context, ideas affecting the acceptability of policy decisions and the scope of political gain (or loss) are stronger forces than evidence of what works.

With regards to the measurement of political factors in research on social protection, differences between the qualitative and quantitative camps provoked some interesting debates. On one hand, using variables such as the presence of democracy can be precise but crude, overlooking the range of regime types with different combinations of both democratic and autocratic traits. On the other hand, qualitative measures can be more nuanced and explanatory, but are also accused of being ‘woolly’ and lacking clear indicators; for example, how do you define strong vs. weak government?

A great strength of an interdisciplinary forum such as the UNU-WIDER symposium is to bring together differing approaches and viewpoints to learn from each other (although questions remained about how to find a balance between ‘crude’ and ‘woolly’ measures!). The ongoing technical focus of some of the discussions emphasises the need for more politically-attuned work, providing a great opportunity for the ESID project which aims to address this gap in the social protection debate.

Kate Pruce is a is a PhD candidate at the University of Manchester’s Global Development Institute and a researcher with ESID.

This article is based on an earlier article published on the ESID website on 25 February 2016.

The consequences of the value-added tax on inequality

Development, democracy and cohesion
Next