Factsheet
The quantity and quality of women’s work

Over the past three decades, there has been notable progress on certain key dimensions of gender equality. Almost universally the gender gap in education has been narrowed and commitments to secure equal access to employment have advanced. However, the rate of progress towards gender equality in employment has varied extensively both within and between regions, with the Middle East and North Africa (MENA) and South Asia lagging the furthest behind.

This factsheet considers trends in the quantity and quality of women’s work in specific country examples from three regions: the Middle-East and North-Africa, sub-Saharan Africa (SSA), and South Asia. The descriptive statistics highlighted here suggest that the trends in the quantity and quality of women’s work often follow very different patterns. It is often true that when countries increase women’s labour force participation, women are also increasingly represented in vulnerable employment. While caution is required in the interpretation of these figures1,  they do indicate that the factors which determine the quantity of women’s work are not necessarily the same factors which determine the quality of the jobs women find. 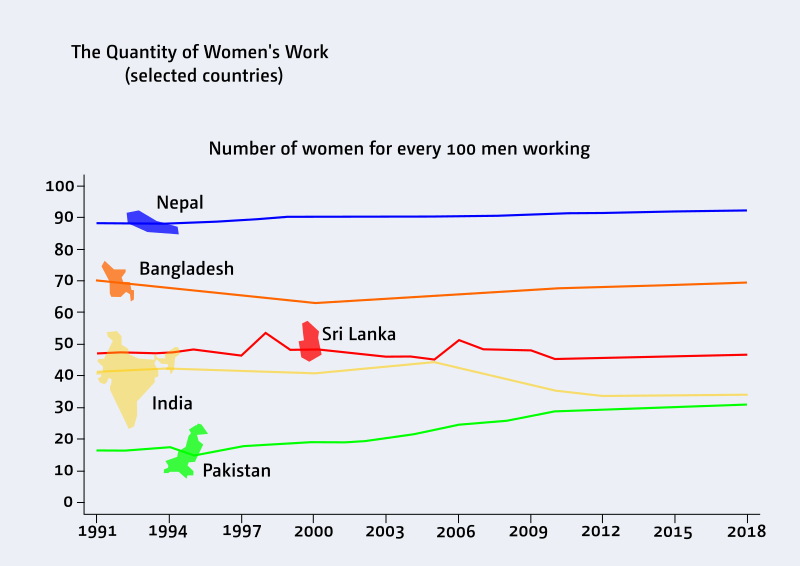 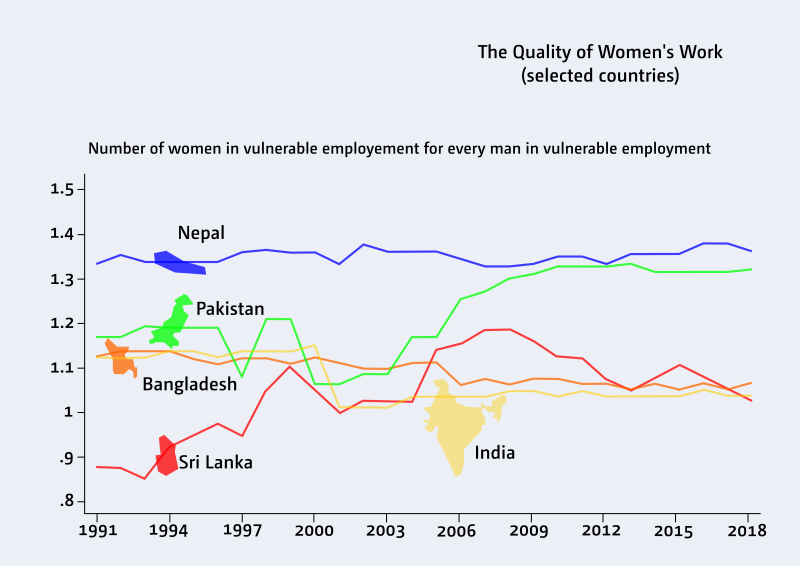 In South Asia, as elsewhere, more women work in conditions of vulnerable employment than do men. Nepal and Pakistan have the highest shares of vulnerable employment for women, with the quality of work in Pakistan having deteriorated the most for women. In terms of the quantity dimension, though, Nepal has the greatest equality in labour force participation in the region and even though Pakistan has the least equality in this dimension, it has seen the biggest improvement over the period. In contrast, India and Sri Lanka have seen women’s labour force participation stagnate, but in these countries, women are also not overrepresented in vulnerable employment.

The Middle East and North Africa 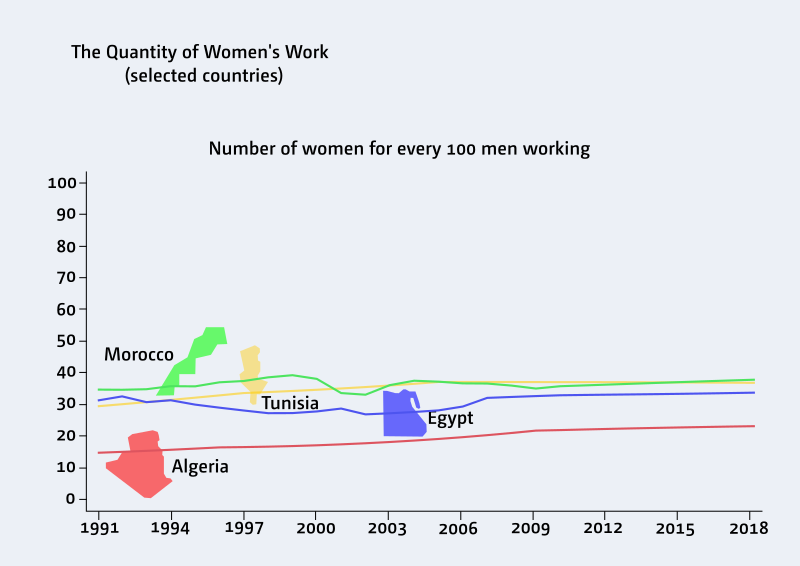 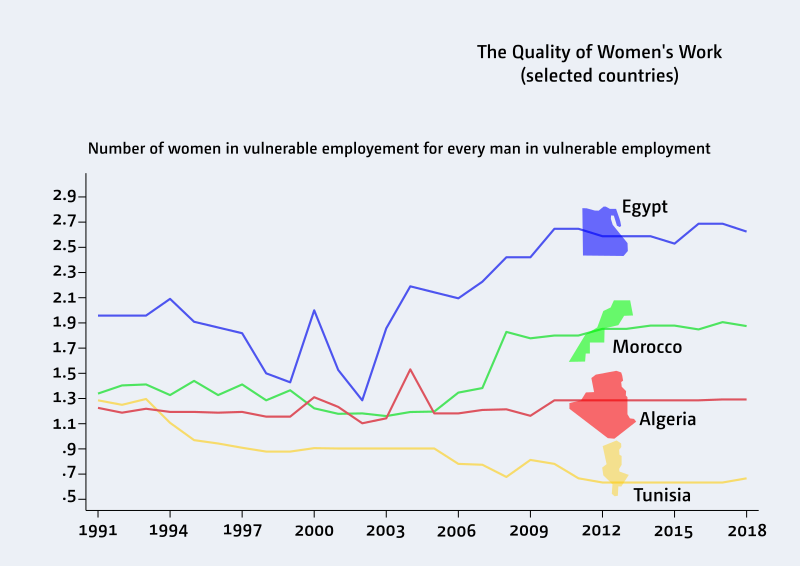 In MENA, countries such as Egypt and Morocco are underperforming in both dimensions. Very few women are working in Egypt and Morocco, with rates of participation similar to those in India, and the women who do work are increasingly over-represented in vulnerable employment. In Eqypt, women are overrepresented in vulnerable employment by more than two to one (2:1) relative to men. This is very different from other countries in the region, such as Tunisia and Algeria, where progress for women in the quantity dimension was also matched by progress in the quality dimension. 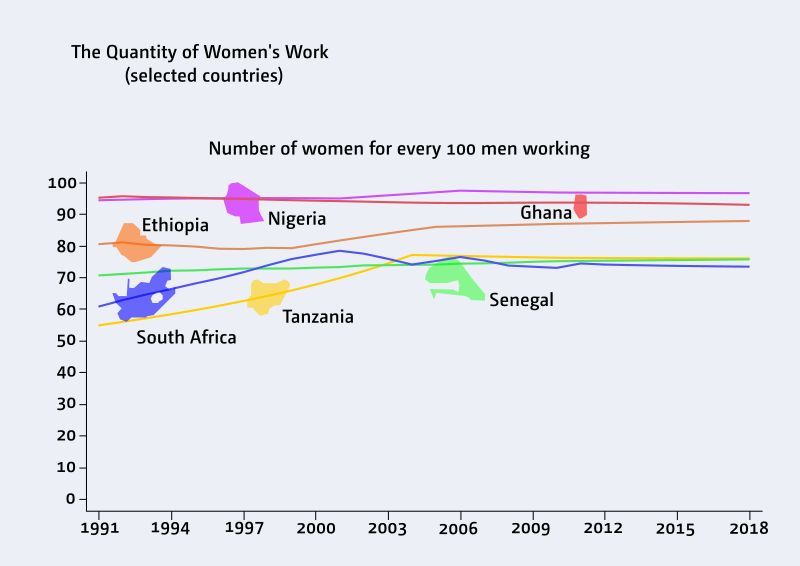 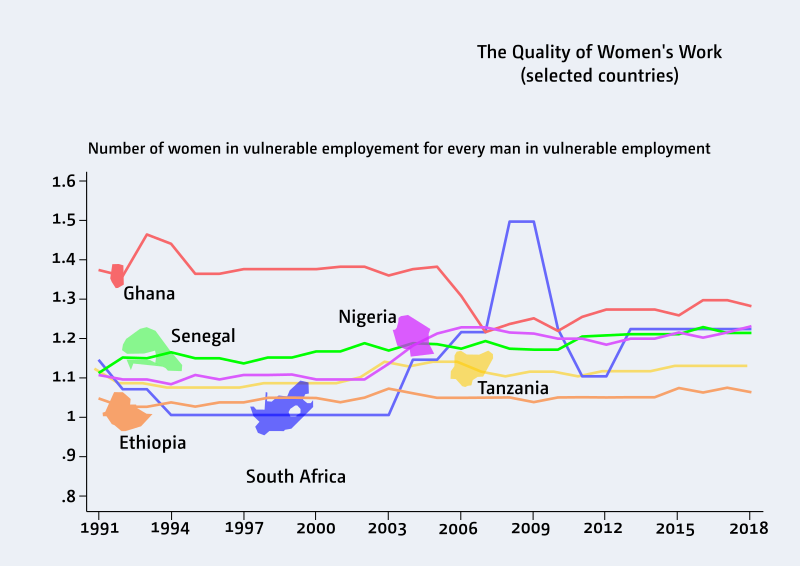 This factsheet was prepared as a part of the Women's work - routes to economic and social empowerment project.

1 As reported in the ILOSTAT documentation note, a number of factors can limit the comparability of statistics on status in employment between countries or over time. Comparisons over time and across countries can be problematic, for example, when the frequency of data collection varies widely. Moreover, the definition of vulnerable employment can vary itself across countries in those countries who group together some of the ICSE categories (merging, for example, own account workers with employers).

2 Jobs which place the worker in a disadvantaged position relative to global standards of decent work are classified as vulnerable employment. These jobs are usually informal and combine poor working conditions with inadequate social security. Moreover, they generally feature inadequate earnings, low productivity, and situations that undermine workers’ fundamental rights. This concept has been proposed by the International Labour Organization (ILO).