Blog
Solving the puzzle of peace

Overcoming the curse of Finland

At The puzzle of peace conference in Helsinki, Adnan Khan, Chief Economist at the UK Foreign Commonwealth and Development Office, lamented what he called the ‘Curse of Finland’.

The Curse was a theme of the panel I moderated, called Conflict legacies and post-conflict recovery. Khan was joined on the panel by Rabab Fatima, Chair of the United Nations Peacebuilding Commission (UNPBC), Ted Miguel of the University of California at Berkeley, Soukeyna Kane, Director, Fragility, Conflict and Violence (FCV) at the World Bank, Elina Kalkku, Under-Secretary of State: Development Policy, MFA Finland, and Gilles Carbonnier, Vice-President, International Committee of the Red Cross (ICRC).

‘Finland is great’, Khan took care to add. Its citizens think so: the country has just been named the world’s happiest for the fifth year in a row. So the ‘Curse’, as Khan described it, is the desire to manufacture more Finlands. Well-meaning peacebuilders try to create a rapid transition from states suffering from the legacies of conflict to states that embody, in the words of the authors of World Happiness Report, ‘social support, generosity to one another, and honesty in government’. How the citizens of Afghanistan, the country at the bottom of the 2022 happiness rankings, must long for a fraction of Finland’s institutional stability.

What it takes to build a Finland

So, what is the path from Afghanistan to Finland? That journey is ‘a very messy process’, Khan argued.

Kalkku agreed. ‘Little over 100 years ago, we were a failed state … this is about capacity. This is about human rights, the rule of law. This is about security and about government budget management. How to manage revenues, how to manage donor contributions, service delivery, employment, the legitimacy of the government.’

Faced with a shopping list this long, 100 years seems about the right amount of time to manufacture a Finland. Our knowledge of the creeping pace of institutional reform is not new. The World Development Report of 2011, celebrated for bringing the peacebuilding process to wider attention, pointed out that the fastest reformers in the twentieth century took 41 years on average to establish the rule of law, 36 years for government effectiveness, and 27 years to stamp out corruption. That was the average of the Finlands. Others took longer, many never made it.

For Adnan Khan, then, the Curse of Finland is shorthand for a dangerous and pervasive myth, that the creation of stable peace from conflict can be a ‘rapid transition’ we can make happen in ‘one big leap’.

Committing to the long haul

A more realistic ‘puzzle of peace’ is how this process can be put on a sustainable track that would satisfy the short-term ambitions of donors, but also devolve power to the people who know most about what has to be done. Ambassador Fatima Described the activities of the UNPBC as creating ‘space for local actors, particularly women and youth, representing civil society organizations, academia, and the private sector to participate in national peacebuilding efforts’. But this work is often squeezed between peacekeeping and development. 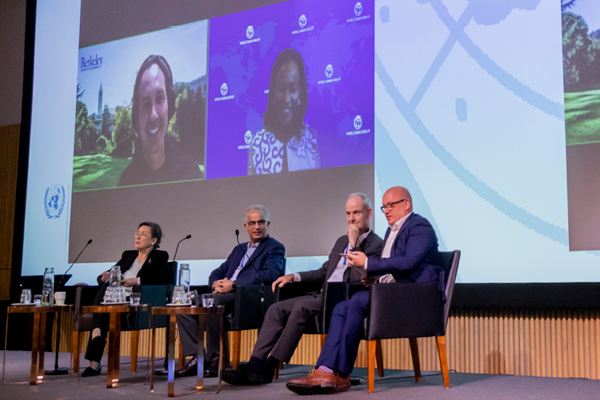 The UN Peacebuilding Fund relies on donations and currently has commitments of only US$518 million for 2020–24. This can provide short-term support, but that support may falter. We also know that post-conflict aid is often withdrawn just as it becomes most effective.

This is especially true, as Miguel pointed out, because many conflict legacies are chronic problems that continue to threaten any recovery. For example, there is the ‘very strong robust statistical relationship’ between climate change and increased risk of conflict ‘There could be an increased risk of civil conflict in vulnerable states of 30–40%, due to global warming alone’, he warned.

Also, the continuing problem of displacement, by which millions of people are not just separated from their communities, but also denied education and work in the place to which they migrate. This is a challenge, to build better ways to integrate refugees into the economic and social fabric of receiving countries — projects that have worked with some success in Colombia, for example .

The plight of migrants illustrates the role of political economy. Donor governments that have invested in recovery want to see results, but their own well-intentioned institutions may delay the process by imposing conditionality on assistance. The ICRC, in contrast, offers unconditional humanitarian aid — recently delivering salaries to 10,000 health workers in 33 hospitals in Afghanistan who had not been paid between August and November 2021, when Afghanistan’s economy collapsed.

Often, Carbonnier explained, the aims of the ICRC are at odds with the rule of law, in the form of international sanctions: ‘we are supporting seven water utilities and sanitation systems in Syria that are on the brink of collapse … it is really difficult in terms of getting all the necessary authorization. Those who pay a high price are the millions of displaced and vulnerable people on the ground.’

Soukeyna Kane responded that the need to accommodate urgent needs like those of the ICRC, chronic conflict drivers such as those highlighted by Miguel, and the proven effectiveness of long-term engagement, have informed the FCV strategy. ‘The challenges that lead to conflict and fragility in the first place cannot be resolved by short-term or partial solutions in the absence of institutions that provide people with security, justice and jobs,’ she explained.

One example, the FCV programme’s acceptance that a narrow definition of democracy — rapid elections — may do more harm than good by polarizing factions and awarding power to one group. More moderate goals may deliver the first step on a sustainable path. ‘Holding elections doesn't necessarily yield the dividend of democracy … Governments need to focus on rebuilding social cohesion and on addressing the long-term drivers of violence, so a country can get on a firm path’, as Kane described it.

If this is to defeat the Curse of Finland, funding, realism, and most of all patience will need to be priorities. ‘Look into the strategy on almost every country,’ Khan warned, ‘what we see is an overloaded agenda, unachievable objectives, and unattainable timeframes’.

Tim Phillips is a journalist, author, and broadcaster focusing on economics and innovation. He is presenter of the VoxTalks Economics and VoxDevTalks podcasts, and has written for the Wall Street Journal, The Guardian, The Times and New York Times among others.

Putting it all together

Can access to finance spur entrepreneurship in Indian informal sector?
Next