Global inequality is falling, isn’t it?

The decline in global income inequality over the last decades has spurred a ‘sunshine’ narrative of falling inequality that has been rather oversold, in the sense that it is likely to be temporary: the decline in global income inequality will reverse possibly in the mid-to-late 2020s, and such a reversal will be driven by changes in inequality between countries (rather than within) — i.e., the same force that was previously contributing to lowering global inequality. In a new paper we find that this startling global inequality ‘boomerang’ would have happened even if there had not been a pandemic.

What happened? Global income inequality has fallen by most common definitions since the late 1980s, and the evidence shows this is largely due to a decline in the between-country component of inequality. For instance, the concept of global inequality for household income or consumption per capita, defined as if all individuals in the world belonged to one single country (known as Branko Milanovic’s concept of global inequality), and measured by the Gini, has declined between 1988 and 2013 at an average annual rate of between 0.41 per cent. The major force behind this decline has been the closing of the gap in per capita incomes between rich countries and middle-income countries.

Looking ahead, we argue that the impact of fast-growing, populous countries such as China and India on the between-country component will, at some point, diminish and start to add to global income inequality if economic growth continues apace. The intuitive reason is that as these middle-income countries close the relative gap with rich countries, they also increase the gap between themselves and low-income countries. Perhaps paradoxical, but the same force which was contributing to lowering global income inequality will start to raise it, and our calculations suggest that this could happen within a decade.

To explore this, our paper reconstructs the full household per capita welfare distributions (income or consumption) of more than 160 countries over the period 1981–2019 and considers what can be said about the plausible evolution of income inequality between countries in the aftermath of the pandemic, up to 2040. Using these distributions and the Gini, we observe that income inequality has been falling markedly and steadily since the end of the 1990s and up to 2015, with a relative stagnation frrom then onwards (Figure 1 for 1981-2019 period). Our paper also digs down into within- and between-country components of inequality for the period of sustained decline, viz. 1999–2015, and reveals that the absolute change in the latter has accounted for the lion’s share of the absolute change throughout the subperiod.

A well-known graph or curve in global inequality discussions is the ‘elephant chart’ which depicts changes in income since the late 1980s for everyone from the poorest to the richest and is shaped like an elephant.

A global inequality boomerang is quite likely. That may not be good for a stable and peaceful world.

Looking ahead at overall global inequality we find something resembling a boomerang (see for yourself).

What do we do and what do we find? First, between 2019 and 2020, global income inequality increased (Figure 1). This inequality uptick is consistent with the result reported here and here. As Angus Deaton argues, such increase “can be largely attributed to India’s poor performance; if [world] inequality is recalculated without India, the uptick is eliminated. By contrast, eliminating China, […] does nothing to eliminate the uptick in 2020.” In our paper, we show that these conclusions hold after removing China or India, each at a time, from the computations, but interestingly, after removing both China and India simultaneously, the inequality uptick remains, suggesting that the pandemic-induced contraction has driven the rest of the countries apart.

Second, the estimates after 2020 under two distribution-neutral growth assumptions suggest an unambiguous feature: there will be a boomerang in the recent declining (between-country) inequality trend by the early-2030s. Specifically, if household per capita income grow at the country’s average annual rate observed over 1990–2019 (scenario 1), the declining trend would reach a minimum by the end-2020s, followed by the emergence of the boomerang. If, on the other hand, income growth is linked to countries’ share of fully vaccinated population (scenario 2), a startling result emerges: the boomerang would occur as soon as 2024. For comparison, we assume a distribution-non-neutral growth setting (scenario 3) based on heterogeneous income growth by deciles between the two most recent surveys in each country. The results hold: the inequality boomerang would emerge well before 2030. 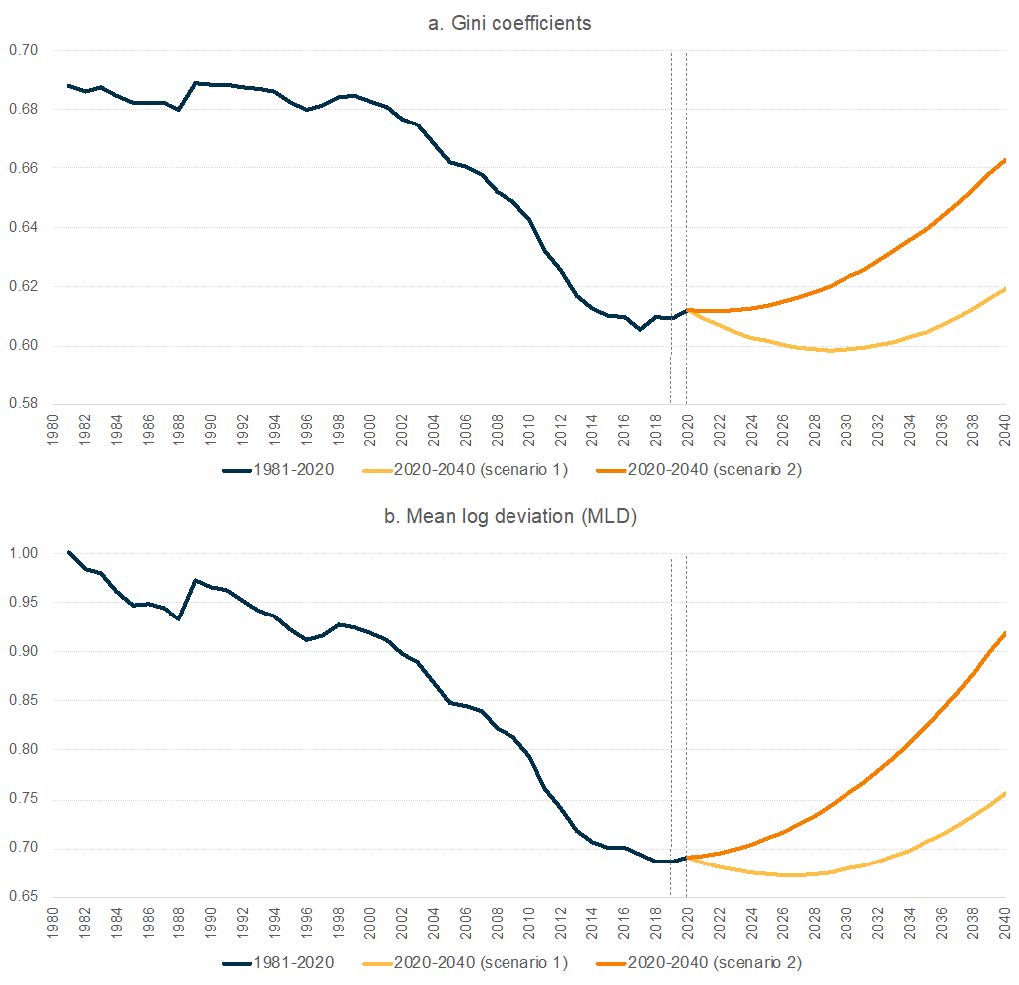 Source: Kanbur, Ortiz-Juarez and Sumner (2022). Note: Vertical lines delimit the change in income inequality between 2019 and 2020.

Why does the boomerang matter?

The global inequality reversal looms toward the mid-to-late 2020s as middle-income countries approach the income levels of high-income economies but by the same token pull away from low-income ones. Such income differences between countries have consequences at a global level. For instance, they encourage migration from poorer countries to richer ones or may lead to the marginalization of developing countries in global decision-making bodies. And there are compelling intrinsic reasons and instrumental ones —e.g., that poverty reduction and a wider spread of prosperity are generally more likely in a world with more equality and accountable, effective governments.

While our core projections are distribution-neutral and thus they only pick up the impact of between-country inequality on global inequality, the fact that the boomerang appears even sooner under a distributional-non-neutral setting suggest that a possibility to counteract the upward movement in global income inequality is for countries’ policy to focus on lowering interpersonal income differences within their borders.

The ‘sunshine narrative’ of declining global income inequality needs to be tempered. A global inequality boomerang is quite likely. That may not be good for a stable and peaceful world.


This article was originally published on From Poverty to Power. It is republished here with permissions. To read the original article click here. 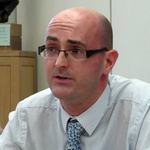 This article was originally published on From Poverty to Power. It is republished here with permissions. To read the original article click here.

Trends in inequality within countries using a novel dataset

Inequality, fiscal space, and crisis response — A matter of priority, affordability, or both?