Blog
The end of the Super Cycle – has it dented resource dependency in poor countries?

In an earlier blog we showed how the trend from 1996 to 2012 in low- and middle-income countries had been one of unambiguously increasing resource dependence – measured in terms of exports. However, most of that sixteen year period coincided with a time of rising commodity prices.

A question that we left untouched was, what has happened to dependency since the end of the commodity super cycle which can be dated to about the middle of 2011? Have the low- and middle-income countries become significantly less dependent on extractive resources?

When did the super cycle end?

It is difficult to pinpoint an exact date at which commodity prices started to decline as this varied for different minerals and metals – see figure below. What is clear though is that by 2012 a downward trend was well-established for all commodities. The same is true for crude oil prices which hit a high of $127 a barrel in April 2011 as the conflict in Libya shut down its supplies.

What has this meant for export dependence?

The figure below shows the change in export dependence from 2012 to 2014 (the latest date for which data are available) for low- and middle-income countries with the highest levels of dependence. The majority (around 60%) have experienced a decline in export dependence. However, apart from a few outliers, most of these declines have been relatively small – well below a 10 percentage point decrease.

What is more surprising is that 40% of highly export-dependent extractives countries experienced an increase in export dependence over this period, despite falling metal and oil prices. And some of these increases were fairly large – more than a 10 percentage point increase. 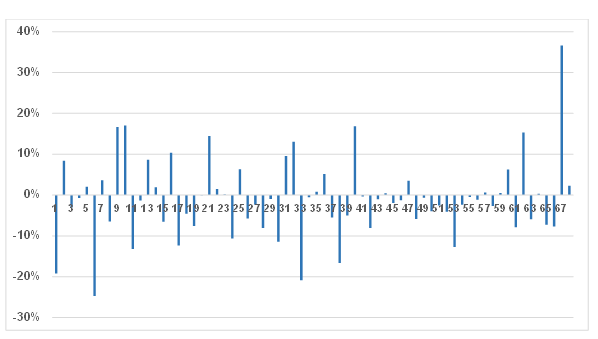 A trend disrupted, but not reversed

Clearly the ending of the super cycle has disturbed the previously strong upward trend in dependence experienced from 1996 until 2012. However, this disruption has not occurred across all countries. As the Figure shows, many have continued to experience further increases in dependence as new investments come on stream to offset the falls in output prices.

It is difficult to say what the long-term trends will be – more extractives capacity could be mothballed and new investments cancelled. For now, all that is clear is that resource dependence remains high – much higher than in our base year of 1996 for almost all countries, even in a situation of low commodity and oil prices.

The clear message from the past few years is that high dependency levels can and indeed do impose significant costs on host countries as the prices of the commodities they export decline in world markets. These costs arise directly in the form of lower values of production and so incomes and employment, and indirectly as government revenues decline, exchange rates weaken and inflation rises.

The further message from this present blog is that the improved management of extractives, which is needed to realize fully their development benefits, must include a gamut of policies from both governments and donors that can improve the likelihood of building new non-extractives productive activities around the catalysing effects of the extractive sectors themselves. This diversification message is hardly new – but its relevance should be heightened by recognition of the very high levels of extractive dependency that these two blogs have highlighted and the persistence of that dependence for many poor countries in spite of declining prices.

What do we know about growth and poverty in Africa?

Ending child marriage and closing the education gap
Next