Mozambique reported its first case of COVID-19 on 22 March 2020. GDP estimates suggest a strong pandemic effect, with a reduction in seven of nine business sectors analysed. However, the agriculture sector, one of the most important, experienced a 9% increase, which may have cushioned the pandemic impact.

GDP growth was severly hampered by the COVID-19 pandemic in Mozambique, with an estimated seven out of nine sectors contracting during the first nine months of the pandemic

The expansion of the Basic Social Subsidy Program nevertheless provided important income support to the poorest part of the population, underlining the importance of such initiatives

The government also adopted measures to mitigate the pandemic effects. As a rapid response, they imposed a utility tariff relief. At a later stage, they adopted monetary transfers to vulnerable families during August–December 2020. Specifically, the government provided one additional temporary support to beneficiaries of the cash transfer Basic Social Subsidy Program equal to three months of its usual monthly payment.

Using MOZMOD, the tax-benefit microsimulation model for Mozambique, this policy brief aims to provide evidence how tax-benefit policies impacted, in the light of the pressure of the COVID-19 pandemic, on incomes, poverty and inequality. The analysis focuses on 2020 and thus on the first nine months of the pandemic. 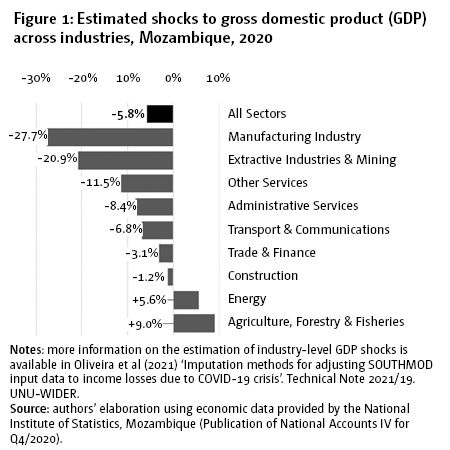 Most sectors were negatively affected by the crisis

Compared to the 2017–19 GDP trend, the pandemic reduced the GDP overall by -5.8% (see Figure 1). The crisis severely hurt the manufacturing industry, mining and extractive industries, and services. However, agriculture, forestry, and fisheries, the sectors that employ the largest share of the population, experienced a good year driven by the production of cereals (maize, sorghum, rice), the production of tuber crops (cassava, sweet potato) and increased production of beans. The estimated growth rate was 9%, one year after the sector was severely hit by two hurricanes.

The above sectoral shocks were translated to individuals’ incomes and ultimately consumption in the micro-level survey data used by the MOZMOD model to analyse how the tax-benefit system performed during the crisis. 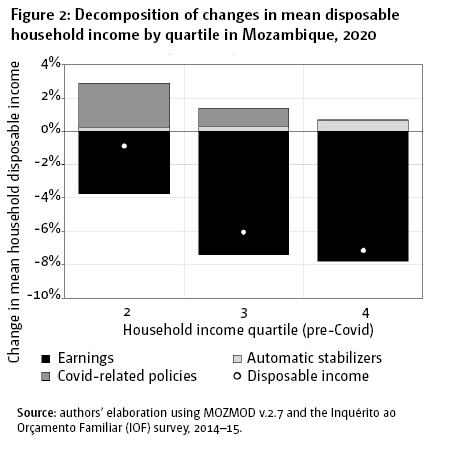 Earnings and disposable income decreased in the middle and top of the income distribution: limited buffering of the shock by the general tax-benefit system

On the other hand, the general tax-and-benefit system that pre-existed the crisis (so-called ‘automatic stabilizers’), had a very limited impact in cushioning against income losses (light grey bar in Figure 2); the automatic reduction of tax payments and social insurance contributions due to lower earnings during the crisis mainly benefited the relatively few indidividuals working in the formal sector, thus mainly the richest quartile of households.

In Mozambique, although many of the households in the bottom quartile of the income distribution report zero income, all households report non-zero consumption). It is thus not possible to calculate the relative change in income for the bottom quartile. Nevertheless, COVID-19 policies also raised incomes and thus increased consumption opportunities for this group of the population in absolute terms.

The expansion of the Basic Social Subsidy Program did not only benefit the very poorest households alone, but instead benefited between 6–7% of households in the bottom three-quarters of the distribution as elegibility for the program depends on many other factors beyond income. Yet, the additional amount provided was relative to households’ initial income considerably higher in the second (22%) than in the third quartile (2%). For households in the second lowest quartile of the income distribution, COVID-related policies (grey bar in Figure 2) therefore compensated most of the earnings shock. 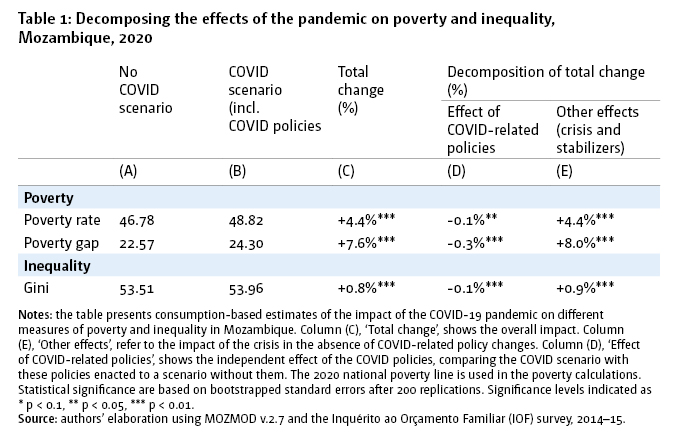 In the light of the worsening COVID-19 crisis in 2021 and slow vaccination campaigns, the introduction of additional benefits in 2021, such as the Direct Transfers After Emergency (PASD-PE), will be fundamental to the poorest people

In the long run, supporting the growth of the formal sector will be important to strengthen the potential of the general tax-benefit system to stabilize incomes of households in the middle and top of the income distribution in times of crisis

Given the severity of poverty in the country these favourable income effects are not large enough to significantly buffer the Increase in consumption-based headcount poverty (Table 1). While the rate Increases by 4.4% (column C) to 48.82% (column B) overall, COVID-related policies only alleviate 0.1% of the overall change (column D). The measures were also not very effective in mitigating the even larger increase (7.6%) in the poverty gap. Inequality as measured by the Gini coefficient increased by 0.8 percent overall.

Due to data constraints the analysis could not take into account the expansion of the Direct Social Support Programme, which likely would have mitigated the detrimental impact of the crisis further.