Tanzania, similar to most sub-Saharan countries, reported its first COVID-19 cases in March 2020. While GDP estimates suggest that the economy was less hard hit than in other African countries, some sectors have nevertheless experienced negative growth. Even with contained GDP contractions in 2020, the country’s tax-benefit system was not effective in buffering the shock, raising concerns should the situation exacerbate.

Negative impacts on GDP growth were contained for Tanzania in 2020, compared to other sub-Saharan African (SSA) countries. However the country lifted its lockdown measures earlier than most other SSA countries

Accommodation and restaurants sector was severely hit, with a 13.2% reduction in sector GDP

Tanzania introduced less discretionary tax-benefit measures to alleviate household income and consumption pressures than other African countries, such as Mozambique, Uganda, and Ghana

This policy brief aims to quantify how well the tax-benefit system performed in the early phase of the COVID-19 crisis. The TAZMOD tax-benefit microsimulation model is used to estimate the impact of the pandemic on incomes, poverty, and inequality, and the role of the tax-benefit system in mitigating the adverse effects of the crisis in Tanzania. The analysis focuses on 2020 and thus on the first nine months of the pandemic. Specifically, the distributional effects of (i) earnings losses due to COVID-19, and (ii) how well the so-called automatic stabilizers (automatic changes in tax-benefit policies as a result of the shock) performed, are analysed. 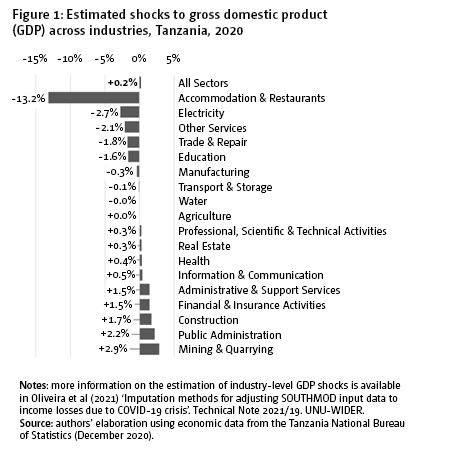 Contained decrease of gdp in 2020

Compared to pre-COVID-19 trends 11 of the 18 sectors of the economy experienced non-negative GDP variation. As the majority of people are engaged in the agriculture sector, the resilience of this sector to the COVID-19 shock may have cushioned the impact on the economy. On the other hand, the accommodation and restaurants sector was severely hit, with a 13.2% reduction in this sector’s GDP, reflecting the impact on tourism (see Figure 1).

The above sectoral shocks are translated to individuals’ incomes and ultimately consumption in the micro-level survey data used by the TAZMOD model, to analyse how the tax benefit system performed during the first wave of the crisis. 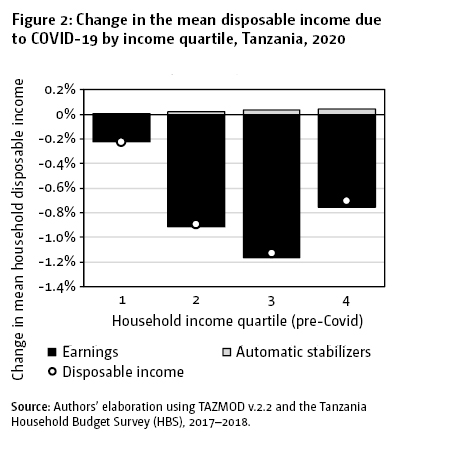 Household disposable income was reduced by 0.8% in the country on average. The reduction was not even across the distribution but relatively stronger for the middle quartile of the income distribution (Figure 2). The main driver for lower disposable income has been the negative shock to earnings (dark bar in Figure 2). The general tax-benefit system had no effect in alleviating the shock for the poorest households and very little effect for all other households (light grey bar). 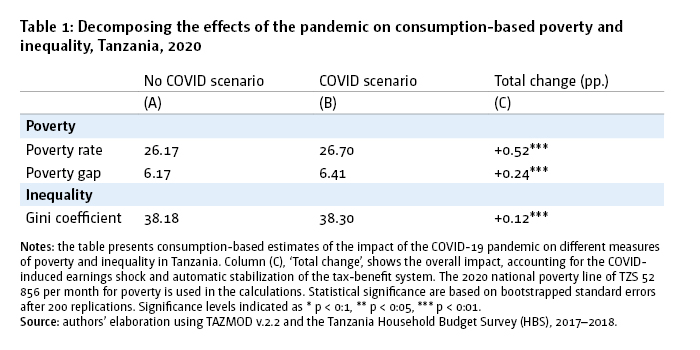 The very limited capacity of the tax-benefit system to buffer earnings shocks also means it played a negligible role in stabilizing poverty rates in 2020. In the event of a larger shock this means any earnings shock will translate more or less directly into a shock to disposable income, and ultimately to household poverty.

The lack of stabilization through the tax-benefit system is closely tied to the large informal sector. As only few individuals pay income taxes and social insurance contributions, they cannot benefit from reduced payments to government when their earnings fall. Similarly, as benefits are not tied directly to earnings levels, households cannot instantly get relief if their earnings plummet.

Increasing temporarily the amount of cash transfers distributed through existing social protection programmes, as has been done successfully in other SSA countries during the COVID-19 crisis, could also serve Tanzania in the future

Collection of up-to-date data with detailed information on how households fared throughout the crisis would be fundamental to improve our understanding of the effects of the COVID-19 pandemic, and also for future crises

Shortages of the social benefit system need to be addressed

While Tanzania was less hit than other SSA countries by the first wave of the COVID-19 crisis, serious risks still exist and the crisis might deepen in 2021 and after.

In the light of a protracted, worsening COVID-19 crisis and slow vaccination campaign roll-out, the heightened vulnerability of the population to shocks is still present.